Bob Murphy asks if central bank actions taken during the early 1930s might be considered "unprecedented". In the comments I pointed out that during that era an early form of QE was tried. I'm not referring here to the famous 1933 Roosevelt purchases of gold that market monetarists often point to. For instance, see David Glasner here, David Beckworth here, and Scott Sumner here. Scott also has a very interesting paper on the 1933 gold purchasing program (pdf). No, I was referring to the 1932 treasury purchasing program.

I'm going to replicate the simple graphical analysis that market monetarists use in order to look at the 1932 episode. See this post by Lars Christensen, for example, who overlays important monetary events (QE1, QE2, LTRO) over the S&P500.

Here is the context. Prior to 1932, the Federal Reserve system was significantly limited in its ability to embark on large purchases of government securities. This was because of strict backing laws in the Federal Reserve Act that limited eligible backing assets to gold and assets accepted as collateral for Fed discount loans, primarily commercial paper. In effect, the Reserve banks could only purchase government debt to the extent that there was already excess gold and discounted assets on the Reserve bank balance sheets.

This limitation was removed with the passage of the Glass Steagall Act of February 1932, which allowed the Fed to include government debt as backing for notes and deposits. Almost immediately the Federal Reserve began a large scale asset purchasing program that increased the system's government debt portfolio from $743 million at the end of February 1932 to $1413m by May. The program, which I'll call QE0, continued at a slower rate after May, eventually hitting a peak just above $1800m by the end of July 1932. I overlay this on the Dow Jones Industrial Average. 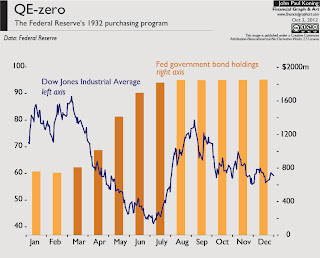 The second chart extends the time frame to include 1933, putting QE0 on a scale with the Roosevelt devaluation. 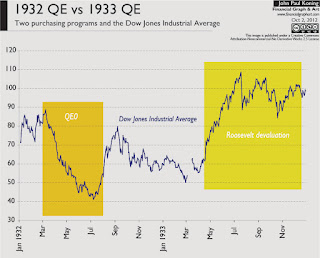 Gavyn Davies, who has treaded this path before, notes that Milton Friedman and Anna Schwartz declared QE0 to be a success. In their Monetary History of the United States, the two drew attention to the conjunction of QE0 with a lull in bank failures and a "tapering off of the in the decline in the stock of money". They point to the bottoming of industrial production in August, five months after QE0 started, as a sign of its success. In his History of the Federal Reserve, Allan Meltzer also strikes a note of optimism when he discusses QE0, noting many of the same improvements in data that Friedman and Schwartz point to. Meltzer writes that "it seems likely that had purchases continued, the collapse of the monetary system during the winter of 1933 might have been avoided" and notes the rise in stock prices beginning in July as evidence.

But no market monetarist would agree with Friedman and Schwartz's analysis, since the new breed of monetarists take asset prices as the best indication of monetary stance. Scott Sumner points out here, for instance, that US equity markets had one of their fastest two day rallies in history as President Hoover met with Congressional leaders to begin work on Glass Steagall. All good, then, for the market monetarist stance, who like to see rising market prices coincide with easy monetary policy at the zero lower bound. Unfortunately for them that was the end of the rally. Markets continued falling to new lows even as QE0 accelerated. Scott Sumner indeed notes that "In many respects, the period from April to July 1932 was the worst three months of the entire Depression. Commodity prices continued to fall, and both stock prices and industrial production reached their Depression lows in July." Oddly enough, only with the end of the QE0 did stock prices begin to rise again, as the first chart shows, which runs contra to market monetarist thinking.

No wonder then that market monetarists prefer to look at the second chart. In 1933, the conjunction of increases in stock prices with various monetary events, including the departure of the dollar from gold convertibility and Roosevelt's gold purchase plan, is quite striking. This cozy relationship is no doubt the main reason that market monetarists prefer to point to 1933 rather than QE0 for evidence of monetary policy effectiveness at the zero lower bound.

QE0's seeming failure might seem to confirm Murray Rothbard's view that the huge increase in the money supply engendered by QE0 "endangered public confidence in the government's ability to maintain the dollar on the gold standard," leading to a loss of confidence on the part of foreigners who drew out gold, and on the part of Americans who converted deposits into notes. This turned an intended inflation into an unintended deflation. The aboves is also Peter Temin's view, who points out that the purchases reduced confidence, the resulting gold outflow nullifying QE0's potential for expansion.

My reading of Scott Sumner is that the 1932 purchasing program was rendered ineffective because of growing expectations that the dollar would float, leading to gold ouflows and an ensuing general panic in equity markets. In meting out blame for this panic, Sumner emphasizes the role of Congress in engendering uncertainty rather than the Fed's QE0 program. Once the dollar panic was alleviated and the hoarding instinct of foreign central banks and the private sector satiated, markets began their rise in the latter half of 1932.

Hsieh and Romer (pdf), on the other hand, use data on dollar forward rates to show that traders were not particularly worried about a dollar devaluation. If H&R are right, then one can only conclude that there was no dollar crisis, leaving market monetarists with no corresponding event to blame for counterbalancing the inflationary effects of QE0. So QE0, it would seem, was irrelevant -- a non-event. Scott talks about Hsieh and Romer's paper here. It all seems rather tortured to me, and leads me to (somewhat dismally) conclude that one can probably get a set of historical events to say almost anything one wants it to say. This is not a criticism of Scott, but one of economics in general.

All of this leads to current discussion of QE3. The New Keynesians point to the ineffectiveness of QE itself at the zero lower bound. For instance, see Simon Wren Lewis. This view is inherited from John Maynard Keynes who, it would seem, got it from his observations of the failure of QE0 in 1932. Here is Keynes in Chapter 15 of the General Theory:


There is the possibility, for the reasons discussed above, that, after the rate of interest has fallen to a certain level, liquidity-preference may become virtually absolute in the sense that almost everyone prefers cash to holding a debt which yields so low a rate of interest. In this event the monetary authority would have lost effective control over the rate of interest. But whilst this limiting case might become practically important in future, I know of no example of it hitherto. Indeed, owing to the unwillingness of most monetary authorities to deal boldly in debts of long term, there has not been much opportunity for a test. Moreover, if such a situation were to arise, it would mean that the public authority itself could borrow through the banking system on an unlimited scale at a nominal rate of interest.

The most striking examples of a complete breakdown of stability in the rate of interest, due to the liquidity function flattening out in one direction or the other, have occurred in very abnormal circumstances. In Russia and Central Europe after the war a currency crisis or flight from the currency was experienced, when no one could be induced to retain holdings either of money or of debts on any terms whatever, and even a high and rising rate of interest was unable to keep pace with the marginal efficiency of capital (especially of stocks of liquid goods) under the influence of the expectation of an ever greater fall in the value of money; whilst in the United States at certain dates in 1932 there was a crisis of the opposite kind — a financial crisis or crisis of liquidation, when scarcely anyone could be induced to part with holdings of money on any reasonable terms.

The market monetarists, of course, believe in the effectiveness of QE, although announcing a nominal target would greatly improve a purchase program's effectiveness.

This is what Nick Rowe means when he says that there are two types of economists (HT Bob Murphy). There are those who think monetary policy is useless at the zero lower bound, and those who don't. I wonder how much of the divergence between these two traditions has its origins in the data generated by the separate 1932 and 1933 monetary events. If you focused on the latter, you became a monetary policy believer, if you focused on the former you stopped believing.

Other posts on the efficacy of QE or lack thereof: