The final chapter in the Zimbabwe dollar saga? 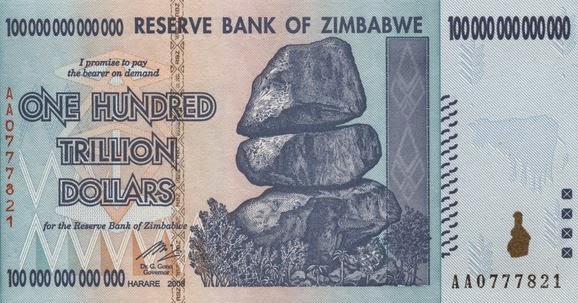 Here's an interesting fact. Remember all those worthless Zimbabwe paper banknotes? The Reserve Bank of Zimbabwe (RBZ), Zimbabwe's central bank, is officially buying them back for cancellation. According to its recent monetary policy statement, the RBZ will be demonetizing old banknotes at the "United Nations rate," that is, at a rate of Z$35 quadrillion to US$1. Stranded Zimbabwe dollar-denominated bank deposits will also be repurchased.

As a reminder, Zimbabwe endured a hyperinflation that met its demise in late 2008 when Zimbabweans spontaneously stopped using the Zimbabwe dollar as either a unit of account or medium of exchange, U.S. dollars and South African rand being substituted in their place. Along the way, the RBZ was used by corrupt authorities to subsidize all sorts of crazy schemes, including farm mechanization programs and tourism development facilities.

Upon hearing about the RBZ's buyback, entrepreneurial readers may be thinking about an arbitrage. Buy up Zimbabwe bank notes and fly them back to Zimbabwe for redemption at the RBZ's new official rate, making a quick buck in the process. But don't get too excited. The highest denomination note ever printed by the RBZ is the $100 trillion note. At the RBZ's demonetization rate, one $100 trillion will get you... US$0.003. With these notes selling for US$10 to $20 as collectors items on eBay, forget it—there's no money to be made on this trade. If you've already got a few $100 trillion Zimbabwean notes sitting in your cupboard, you're way better off hoarding them than submitting them to the RBZ's buyback campaign.

But this does give us some interesting data points about the nature of money. Last year I wrote two posts on the topic of whether money constituted an IOU or not. With the gold standard days long gone, central banks no longer offer immediate redemption into some underlying asset. But do they offer ultimate redemption into an asset? A number of central banks—including the Bank of Canada and the Federal Reserve—make an explicit promise that notes constitute a first claim or paramount lien on the assets of the central bank. This language implies that banknotes are like any other security, say a bond or equity, since each provides their owner with eventual access to firm assets upon liquidation or windup of the firm.

George Selgin is skeptical of the banknotes-as-security theory, replying that a note's guarantee of a first claim on assets is a mere relic of the gold standard. However, the Bank of Canada was formed after Canada had ceased gold convertibility. Furthermore, modern legislation governing central banks like the 2004 Central Bank of Iraq (CBI) Law declares that banknotes "shall be a first charge on the assets of the CBI." [See pdf]. So these promises certainly aren't relics of a bygone age. The Zimbabwean example provides even more evidence that a banknote constitutes a terminal IOU of sorts. After all, Zimbabwean authorities could have left legacy Zimbabwe dollar banknotes to flap in the wind. But for some reason, they've decided to provide an offer to buy them back, even if it is just a stink bid.

Given that banknotes are a type of security or IOU, how far can we take this idea? For instance, analysts often value a non-dividend paying stock by calculating how much a firm's assets will be worth upon break up. Likewise, we might say that the value of Zimbabwean banknotes, or any other banknote, is valued relative to the central bank's liquidation value, or the quantity of central bank assets upon which those notes are claim when they are finally canceled. If so, then the precise quantity of assets that back a currency are very important, since any impairment of assets will cause inflation. This is a pure form of the backing theory of money.

I'm not quite willing to take this idea that far. While banknotes do appear to constitute a first claim on a central bank's assets, the central bank documents that I'm familiar with give no indication of the nominal quantity of central bank assets to which a banknote is entitled come liquidation. So while it is realistic to say that the Reserve Bank of Zimbabwe always had a terminal offer to buy back Zimbabwe dollars, even during the awful hyper-inflationary period of 2007 and 2008, the lack of a set nominal offer price meant that the value of that promise would have been very difficult to calculate. More explicitly, on September 30, 2007, no Zimbabwean could have possibly know that, when all was said and done, their $100 trillion Zimbabwe note would be redeemable for only US$0.003. The difficulty of calculating this terminal value is an idea I outlined here, via an earlier Mike Friemuth blog post.

While the final chapter of the Zimbabwe dollar saga is over, the first chapter of Zimbabwe's U.S. dollar standard has just begun. Gone are the days of 79,600,000,000% hyperinflation. Instead, Zimbabweans are experiencing something entirely new, deflation. Consumer prices have fallen by 1.3% year-over-year, one of the deepest deflation rates in the world and the most in Africa. With prices being set in terms of the U.S. dollar unit of account, Zimbabwean monetary policy is effectively held hostage to the U.S. Federal Reserve's 12 member Federal Open Market Committee. Most analysts expect the Fed to start hiking rates this year, so I have troubles seeing how Zimbabwean prices will pull out of their deflationary trend. Few people have experienced as many monetary outliers as the citizens of Zimbabwe over such a short period of time. I wish them the best.
Posted by JP Koning at 11:20 PM