Hike rates when you hear the creak of inflation at the door, not when you see the whites of its eyes 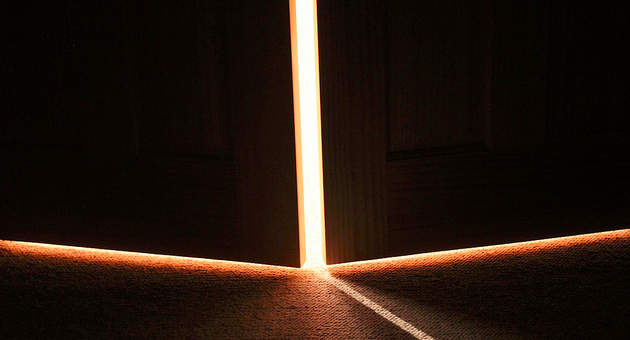 A common argument against the Fed raising interest rates next week is the asymmetry in risks that it faces. If it keeps rates low too long and sets off inflation, no problem: it can quickly hike rates a few times to bring prices back in line. However, if it boosts rates too early and an unintended slowdown sets in, the Fed won't have room to cut a few times in order to fix its mistake. That's because the Fed is at the zero lower bound, the edge of the world in monetary policy terms. To avoid this conundrum, the Fed should hold off as long as possible before raising, at least until it "sees the whites of inflation's eyes."

As Paul Krugman points out, the asymmetry argument is only a recent one. Historically U.S. interest rates have hovered far above zero. If the Fed made a mistake, it didn't have to worry about falling off the edge of the world in order to fix the situation, it could simply ratchet rates down a few times. Rather than waiting till the last minute to see the whites of inflation's eyes before hiking, the FOMC only had to hear the creak of inflation at the door.

I don't buy the current asymmetry argument. I might have bought it back in 2013, but the data has changed.

Over the last year, Sweden, Switzerland, Denmark, and the ECB have all demonstrated to the world that central banks can safely lower rates into negative territory without setting off the sorts of ill effects that economists have always feared, the main one being a race into 0% yielding cash. The theory here is that if a central bank reduces rates to, say, -0.1%, then paper cash—which pays a superior 0% return—starts to look pretty attractive. An arbitrage process begins whereby central bank deposits are converted into cash until all deposits have disappeared. Thus rates can't be reduced below 0%.

Evidence over the last 12 months shows otherwise. Denmark's Nationalbank has kept its deposit rate at -0.75% since early February. Danes, however, are not scrambling for banknotes, as the chart below shows. After seven months of negative rates, cash and coin outstanding are growing at a rate that lies pretty much at its two decade average. 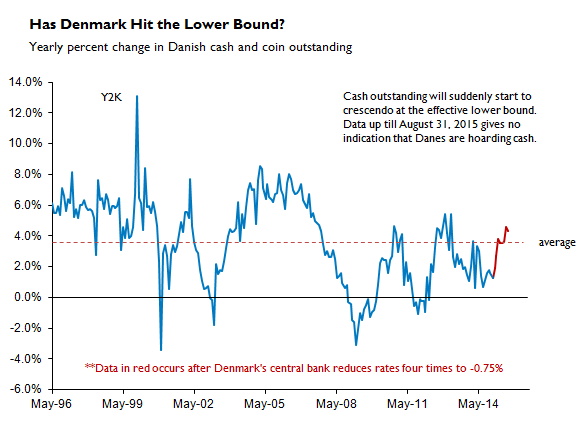 The Swiss National Bank has maintained a -0.75% overnight rate since January, yet there's been no spike in Swiss paper franc demand, as the next chart shows. In fact, cash outstanding seems to be growing at one of its slowest rates in years. 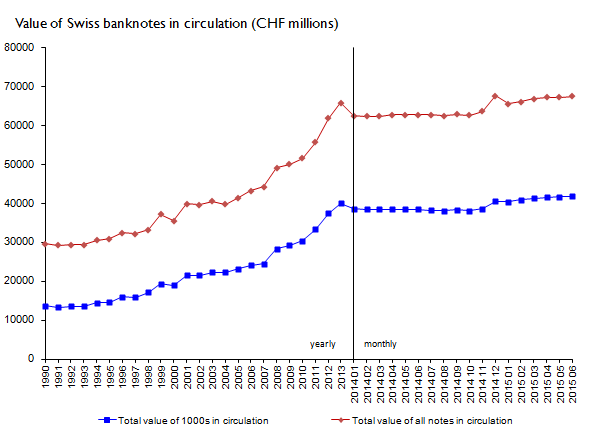 We'd expect the demand for Swiss cash to be especially sensitive when interest rates fall below zero because the SNB issues the world's largest value banknote; the hefty 1000 sFr. The more valuable the banknote the lower the cost of storing wealth in cash form. These carrying costs are particularly important in determining the profitability of flight into cash at negative interest rates. A central bank can push rates a sliver below 0% without setting off a flight out of deposits into banknotes as long as there are inconveniences in storing cash. The greater these inconveniences, the larger that sliver.

The fact that the SNB has been able to keep rates at -0.75% for seven months now without setting off a stampede into 1000 notes indicates that the burdens of holding Swiss currency are higher than everyone had previously thought. It would seem that investors would rather lose 0.75% each year than bear the costs of storing 1000s. At some negative interest rate, maybe -1.5%, the flight into Swiss notes will start. But it hasn't yet. As for the U.S., its highest value banknote is the lowly $100, so it's fair to assume that the costs of storing U.S. paper money are significantly higher than Swiss money. Which means that if the Swiss can safely cut to -0.75% without setting off cash arbitrage, the Fed should be able to descend to at least -1.0% before panic ensues.

MMMFs are like regular mutual funds except their share price stays fixed at US$1.00. Investors can cash out at that price whenever they want, enjoying low but steady dividend payments until then. MMMFs maintain par conversion by investing in safe, highly liquid short term debt. However, if the Fed were to drive short term rates into negative territory, MMMFs would be forced to invest in assets that promise a negative return. $1000 invested in t-bills, for instance, would be worth only $999 upon maturity. That means that an MMMF simply wouldn't have a sufficient quantity of assets to allow everyone to redeem their shares at US$1.00. The fund will "break the buck," or mark its share value down to something like 99 cents to allow for full redemption. Since MMMFs are supposed to be cash-like—in fact, many of them offer cheque-writing capability—such a development would be disastrous, or so goes the story.

I don't consider breaking the buck to be a terrible outcome, but even if it is, European money market mutual funds—faced with negative interest rates—have already found an ingenious way to avoid it; a Reverse Distribution Mechanism. Rather than reducing redemption below par, MMMFs simply dock the number of shares that each shareholder has in his or her account. For example, as rates slide below zero, instead of 100 units being worth only $0.99 each, a shareholder forfeits one unit and ends up with 99 units worth $1.00 each. The deeper rates fall, the less units each investor owns. The genius of this patch is that the purchasing power of each share stays constant, but the negative interest rate is efficiently passed on to the owner of the MMMF.

So fears of a dash into cash at 0% and a collapse of MMMFs are just bogeymen. If the Fed hikes to 0.5% this month—and this proves to be a mistake—it still has plenty of room to make things right. Given how well Europe has coped over the last twelve months, the Fed can easily cut rates another 1.5% to -1.0%; that's six quarter-point reductions or thirty ten-point cuts. Only when rates falls beyond Swiss or Danish levels, say to -1.0%, will the Fed find itself in truly asymmetrical territory. (If necessary, here are some simple ways to allow for even more negative rates).

To be clear, that doesn't mean I think the Fed should hike rates next week. The fact that the FOMC continues to undershoot its 2% core inflation target would seem to indicate that holding off might be the right thing to do. Rather, I don't think that Fed policy makers need to wait to see the white's of inflation's eyes before they hike, they need only wait to hear the creak of inflation at the door.
Posted by JP Koning at 10:44 PM