Modi and the overstamping of demonetized currency


When Indian PM Narendra Modi and his small group of would-be monetary architects were putting together their plan to suddenly demonetize the 500 and 1000 rupee note and replace them with new notes (including a new 2000 rupee note), they must have been missing a monetary historian. That's because there is a long history of nations suddenly demonetizing the entire circulating paper issue and introducing a new paper currency. These rapid switches have tended to follow a well-trodden script, one that Modi did not follow. Had he chosen to adopt it, the last two months might have been less chaotic.

One challenge faced by any prospective note switcher is to print the new currency fast enough to replace the legacy notes. When the switch is a slow one that is planned long beforehand, like the euro introduction, this is not an issue. In the case of a rapid switch that cannot be prepared for, however, the printing challenge is overwhelming. In India's case, pre-printing notes was not the answer. Because its goal was to surprise a large number of cash-users with undeclared cash, the rupee switch had to be sudden—printing large batches of notes ahead of time might have tipped off the prey. Without enough currency, however, an economy undergoing a switch is cursed to endure a temporary cash crunch, much like the one India has experienced. To cope with the period between the demonetization of the old notes and the issuance of new ones, nations have resorted to an old monetary trick called overstamping.

The 1993 conversion of old Czechoslovak koruna into new Czech and Slovak money is the best modern example of a successful rapid currency switch, thanks in no small part to its use of the overstamping technique. With the January 1993 dissolution of Czechoslovakia into Slovakia and the Czech Republic, the public also anticipated an ensuing breakup of the still-circulating Czechoslovak koruna into two national currencies. Since Czech was expected to be the more economically robust of the two nations, depositors began to move their paper money and bank accounts to the Czech side of the border to ensure their savings would be held in the stronger of the two soon-to-be currencies.

Anxious to put an end to capital flight before it crippled the monetary systems of the fledgling nations, the Czechs and Slovaks were forced to introduce new monetary units ahead of schedule. Unfortunately, the banknotes hadn't been printed yet. As a temporary expedient, the monetary authorities decided to affix different coloured stickers, or stamps, to existing Czechoslovak banknotes in order to demarcate them as either new Czech koruna or new Slovak koruna.

In executing a currency switch, affixing stamps on existing legacy notes has several advantages over relying entirely on new banknotes. Stamps take far less time to design and print than banknotes, they can be rapidly distributed thanks to their small size, and they are cheaper to store. In the case of Czechoslovakia, for six days in February 1993 all koruna banknotes were brought in so as to have the proper Czech or Slovak stamp affixed to them (below is a legacy koruna note with a Czech stamp on it). After the six day period passed, any unstamped currency was declared worthless. Cross border movements of cash between Czech and Slovakia were made illegal for that period and cash withdrawals from banks suspended.


Once the new notes had been printed up, Czechs and Slovaks could bring their stamped legacy notes to the bank to get new ones. All in all, it was a relatively smooth currency switch.

As I said at the outset, there is a long history to currency swaps. In 1919, the existing Austro-Hungarian krona was dismembered, with each of Czechoslovakia, Serbia, Hungary, Austria, and Romania printing unique stamps to be affixed to the krona circulating in their jurisdiction. Once new notes had been printed, stamped krona could be brought in for redemption. Peter Garber and Michael Spencer go into some detail on this episode here. As for the general practice of affixing stamps to money, I'd suggest Arnold Keller and John Sandrock here.

Zooming forward in time, to fill the void vacated by demonetized banknotes Modi's planning team decided to rely entirely on the ability of the Reserve Bank of India (RBI) to print new currency. And that's where its problems began; with 24 billion pieces needing to be printed, there simply wasn't enough time.  Blogger James Wilson calculates the replacement effort might not be completed till as late as September 2017: 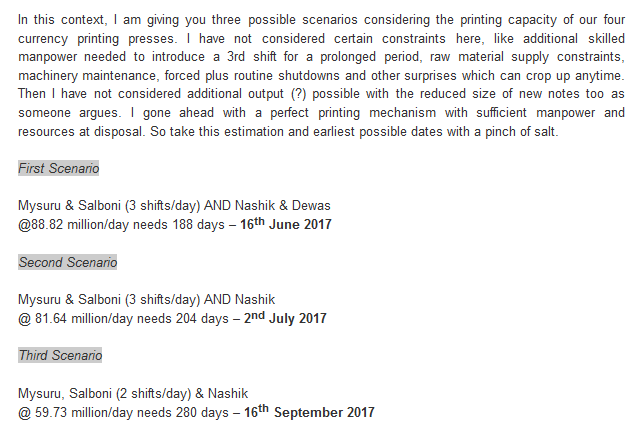 Long lineups developed at banks and, without enough cash to go around, trade has been impaired. Had it borrowed from the above precedents, Modi's demonetization team might have been able to avoid at least some of this mess by procuring a supply of several billion worth of stickers or stamps. Some of these could have been printed and hoarded by the government in the months prior to November 8, the rest could have been printed on demand after the announcement date. The trick would be to ensure that the stamps had enough special security features so that, once issued, they succeeded in throwing off counterfeiters, who would have a strong incentive to make fakes for sale to those who had large amounts of undocumented cash.

Under a stamp scheme, come the November 8 demonetization announcement the RBI would have distributed the stamps to banks. Members of the public could then bring their demonetized notes to their local bank in order to have them stamped, up to a certain quota. These stamped notes would quickly reenter circulation, helping close the void left by the sudden demonetization of 80% of India's money supply and the slow trickle of newly-issued 500 and 2000 rupee notes entering the economy. Once the RBI had managed to print enough 500 and 2000 notes, it would set some fixed conversion period for turning in stamped 500 notes and 1000s for new notes.

It could be that Modi's team considered a stamping mechanism and decided against it for some justifiable reason that I'm not aware of. Or perhaps they simply didn't do their homework. If they didn't, overstamping could very well have diminished the shock faced by the Indian economy over the last few weeks. Countries that decide to follow India's path in the future would do well to include it in their plans.
Posted by JP Koning at 2:25 PM