An homage to the cheque (or check)


I recently read an FP article about the odd persistence of the cheque as a way to make payments. According to the author, even though cheques are slow and cumbersome, people are willing to live with these drawbacks because they like the ability to write messages in the memo field. Competing electronic payments options (in Canada at least) don't have the ability to write memos.


As someone pointed out to me on Twitter, in the U.S. the cheque's memo field is more than just a place for writing personal reminders. According to the law in certain states, when you disagree with your creditor about how much is owed—say the contractor who is building your deck has spent too much on materials—by writing out a cheque for less than the agreed amount and including "paid in full" in the memo line, the debt is extinguished the moment the contractor cashes it.

What follows are some other neat things about cheques that don't get much attention.

People tend to think of cheques as a mere set of instructions issued to a banker on how to move bank deposits. To transfer deposits, we could always just walk into a bank and do this in person, but we prefer to save time and energy by issuing the instructions on paper.

But a cheque is more than just a substitute for a set of in-person verbal instruction. By inscribing these instructions onto a long-lived medium, we've created an entirely distinct financial instrument, something akin to a debt or a derivative. As long as a cheque exists, it derives its value from the underlying deposits that are expected to be delivered by the issuer.

Normally we take for granted that a $1000 cheque is worth $1000. But this isn't always the case. For instance, if the cheque writer decides to spend a $1000 cheque that has been post-dated for three months—i.e. the underlying cash can not be collected till then—the receiver will typically only accept said cheque at a discount to face value, say $960. After all, the receiver needs to be compensated for the interest they will have to forego in holding that cheque for the three months to encashment, not to mention incurring the risk that the cheque writer fails in the interim.

We don't normally think of cheques as a form of debt or financing, but after India's demonetization an interesting example of this practice was brought to light. This fascinating story describes how small-scale enterprises in Varinasi accept post-dated cheques as payment and then bring them to a battawala—or "one who deducts"—for discounting. The battawala sets his commission, or discount, based on the creditworthiness of the cheque issuer. The ability to sell post-dated cheques allows these businesses to finance expense such as salaries and inventories. A second article describes a battawala market that "opens from 3-7 p.m. every day at Chowk, the heart of the business district," where several thousand battawallas sit and trade post-dated bearer cheques for cash.

North America also has a post-dated cheque market of sorts. Payday lenders, which offer short-term lending to those who can't get it from banks, only issue loans on the provision of a post-dated cheque. They accept these cheques at large discount to face, so that a $350 cheque can only buy, say, a $300 loan.

In addition to being a form of debt, cheques are also a type of money. I don't mean in the sense that cheques allow for the transfer of underlying bank deposits; rather, an uncashed cheque can itself be transferred between many different parties as a medium of exchange. This is something that younger people who only use credit cards and P2P options may not know, but if the issuer of the cheque writes "to bearer" in the pay to field, then literally anyone who is 'bearing' or holding that cheque can bring it into the bank to be cashed. Given that it grants universal access to underlying cash, a $100 bearer cheque might be transferred three or four time over the course of a few days, resulting in $300 worth of transactions being consummated rather than just $100. In the first of the two articles I linked to above, for instance, the owner of a small sari business says that it isn't uncommon for a bearer cheque to change hands as many as five times.

Just a head's up. Even if you indicate the name of the recipient in the pay to field of a cheque you've written, say to John Doe, he can still use it as a medium for paying someone else rather than cashing it... without you even knowing. By endorsing the back of the cheque with his signature, John Doe converts it into a bearer cheque. This is called blank endorsement. Anyone he gives it to can now either bring it in to be cashed or continue passing it off in a long chain of transactions. In the U.S., these sort of cheques are called third-party checks, although banks tend to be a little leery about accepting them these days.

The use of cheques-as-money is promoted by laws that, like banknotes, grant them currency status. I touched on this distinction last week, but here it is again. Say that person A is carrying some sort of financial instrument in their pocket and it is stolen. The thief uses it to buy something from person B, who accepts it without knowing it to be stolen property. If the financial instrument has not been granted currency status by the law, then person B will be liable to give it back to person A. If, however, the instrument is currency, then even if the police are able to locate the stolen instrument in person B's possession, person B does not have to give up the stolen cheque to person A. We call these special instruments negotiable instruments.

A neat result of the transferability of cheques is that cheque payment systems are incredibly robust in the face of disasters and banking system shutdowns. Any direct transfer a bank deposit, say using a debit card or some other form of electronic fund transfer, requires that the parties to a payment to establish a  communications channel with their respective banks. If there is a problem with either of the banks, the merchant, or the connection itself, then the transfer can't go through. With a cheque however, there is no need to communicate with one's banker. A cheque is created entirely without the bank's say-so. Anyone is allowed to receive that cheque, it being their choice to either cash it or pass it along. Which means that if the banking system is on the fritz, cheque payments can proceed.

The most famous example of this robustness is the Irish banking strike of 1970. With the entire banking system shut, for six months post-dated cheques circulated as the main form of money. In a well-known paper, Antoin Murphy recounts how pub owners acted as evaluators of the credit quality of each cheque, an episode I once wrote about here. 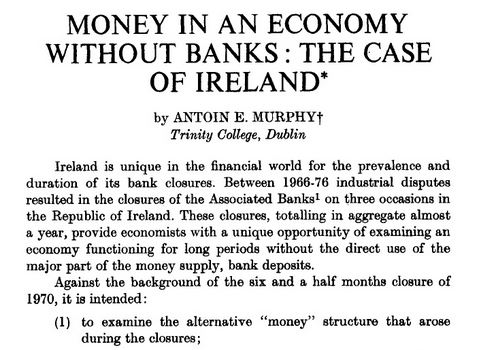 Another nice property of cheques is that, like cash, they can be used by the unbanked. If someone receives a cheque, they can go to the issuer's bank and cash it, even if they don't have a bank account. Alternatively, they can simply endorse the back of the cheque and spend it on as a medium of exchange.

This combination of negotiability, robustness, openness, and decentralization means that long before bitcoin and the cryptocoin revolution, we already had a decentralized payments system that allowed pretty much everyone to participate and, indeed, fabricate their own personal money instruments!

Was there ever a more versatile payments instrument than the cheque? Because you can write on them, a whole language of cheques has emerged, allowing for significant customization. By putting crossings on cheques, like this...

...the cheque writer is indicating that the only way to redeem it is by depositing it, not cashing it. This means that the final user of the cheque will be easy to trace, since they will be associated with a bank account. Affix the words non-negotiable within the cross on the front of the cheque and it loses its special status as currency. Should it be stolen and passed off to an innocent third-party, the victim can now directly pursue the third-party for restitution. To even further limit the power of subsequent users to use the cheque as money, the writer can indicate the account to which the cheque must be deposited.

This language of checks can be used not only by those that have originated the cheque, but also by those that receive it in payment. On the back of any check, any number of endorsements can be written, effectively allowing for the conversion of someone else's payment instructions into your own unique medium of exchange.

In summary, while the popularity of the cheque has certainly been declining over the last few decade, it is still hanging in there—and that's because it seem to be providing some unique services that haven't yet been replicated by cheaper, digital alternatives. While those in the fintech space often smirk at cheques at as an outdated payments option inevitably doomed to extinction, they might be better served trying to replicate some of these features instead.
Posted by JP Koning at 12:07 PM