The road to sound digital money

No, I'm not talking about sound money in the sense of having a stable value. I'm talking about money that is sound because it can survive natural disasters, human error, terrorist attacks, and invasions.

Kermit Schoenholtz & Stephen Cecchetti, Tony Yates, and Michael Bordo & Andrew Levin (pdf) have all recently written about the idea of CBDC, or central bank digital currency, a new type of central bank-issued money for use by the public that may eventually displace banknotes and coin. Unlike private cryptocoins such as bitcoin, the value of CBDC would be fixed in nominal terms, so it would be very stable—much like a banknote.*

It's interesting to read how these macroeconomists envision the design of a potential CBDC. According to Schoenholtz & Cecchetti, central banks would provide "universal, unlimited access to deposit accounts." For Yates this means offering "existing digital account services to a wider group of entities." As for Levin and Bordo, they mention a similar format:


"Any individual, firm, or organization may hold funds electronically in a digital currency account at the central bank. This digital currency will be legal tender for all payment transactions, public and private. The central bank will process such payments by debiting the payer’s account and crediting the payee’s account; consequently, such payments can be practically instantaneous and costless as well as completely secure."

I don't want to pick on them too much, but all these authors are describing a particular implementation of central bank digital money: account-based digital money. There's an entirely different way to design a CBDC, as digital bearer tokens. My guess is that the authors omit this distinction because macroeconomists tend to abstract away from the differences between various types of money. Cash, coins, deposits, and cheques are all just a form of M in their equations. But if you get into the nitty gritty, bearer tokens and accounts two are very different beasts. Some thought needs to go into the relative merits and demerits of each implementation, especially if this new product is to replace banknotes at some hazy point in the future.

Let's first deal with account money. An owner of account-based money needs to establish a connection with the central issuer every time they want to make a payment. This connection allows vital information to flow, including instructions about how much money to transfer and to whom, confirmation that there is sufficient funds in the owner's account, and a password to confirm identity. Only then can the issuer dock the payor's account and credit the payee.

Bearer money, the best examples of which are banknotes and coins, never requires a connection between user and issuer. As I described in last week's post, courts have extended to banknotes the special status of having"currency." What this means is that if you are a shopkeeper, and someone uses stolen banknotes to buy something from you, even if the victim can prove the notes are stolen you do not have to give them back. The advantage of this is that there is never any need for a shopkeeper to call up the issuer in order to double check that the buyer is not a thief.** As for the issuer, say a central bank, they are not responsible for the debiting and crediting of banknote balances, effectively outsourcing this task to buyer and sellers who settle payments by moving banknotes from one person's hand to the other. The upshot of all this is that since users and issuers of bearer money don't need to exchange the sorts of information that are necessary for an account-based transaction to proceed, there is no need to ever link up.

This makes bearer money an incredibly robust form of money. If for any reason a connection can't be established between user and issuer, say because of a disaster or a malfunction, account-based money will be rendered useless. Examples of this include the recent two-day outage of Zimbabwe's account-based real-time gross settlement system due to excess usage, or the famous 2014 breakdown of the UK's CHAPS, its wholesale payments system, which limited the system to manual payments. M-Pesa, Kenya's mobile money service, has periodic outages, and last month my grocery store, Loblaw, suffered from a malfunction in its debit card system. Banknotes—which don't require constant communication with the mothership—worked fine throughout.

The private sector used to be heavily engaged in providing bearer money, both in the form of banknotes and bills of exchange. However, bills of exchange-as-money went extinct by the early 1900s. As for banknotes, the government thoroughly monopolized this activity by the mid-1900s. Which means the government has—perhaps inadvertently—taken on the mantle of being the sole issuer of stable, disaster-proof money. So any plan to slowly phase out government paper money is simultaneously a plan to phase out society's only truly robust payments option.

Going forward, it's always possible that governments once again allow the private sector to  issue bearer money. With the government's bearer money monopoly brought to an end, the public would be well-supplied with the stuff and central banks could safely exit the business of providing a robust payments option. But I can't see governments agreeing to relinquish this much control to private bankers. Which means that for society's sake, whatever digital replacement central banks choose to adopt in place of banknotes and coins should probably have bearer-like capabilities in order to replicate cash's robustness. Account-based money won't cut it. Nor will volatile private tokens like bitcoin.

One way to design a digital bearer money system is to have a central bank issue tokens onto a distributed ledger and peg their value, say like the Fedcoin idea. The task of verifying transactions and updating token balances would be outsourced to thousands of nodes located all over the world. So if all the nodes in the U.S. have been knocked out, there will still be nodes in Europe that can operate the payments system. This would restore a key feature of banknotes, that they have no central point of failure, thereby allowing central banks to get rid of cash. I'm sure there are other ways of creating robust money than using a distributed ledger, feel free to tell me about them in the comments section.

PS: I just stumbled on a 2006 paper from Charles Kahn and William Roberds which nicely captures these two types of money: 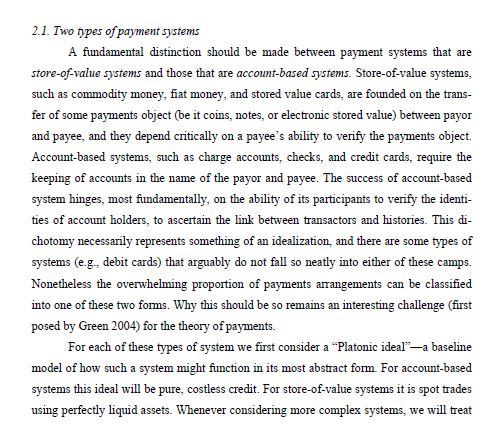