Since they began to be produced in 1914, Federal Reserve notes have always had a promise or obligation printed on their face. But over time this promise has changed. I thought it would be fun to go through the evolution of the promise as an exercise in understanding how the U.S.'s monetary plumbing has changed.

The original 1914 series of Federal Reserve notes had the above stipulation printed on it. It's tough to read, so I've reproduced it in full below:


"This note is receivable by all national and member banks and Federal Reserve Banks and for all taxes, customs and other public dues. It is redeemable in gold on demand at the Treasury Department of the United States in the city of Washington, District of Columbia or in gold or lawful money at any Federal Reserve Bank."

There were really four promises here. The first was that all banks who were members of the Federal Reserve system would accept notes at their counter, as would the Reserve banks themselves—i.e. the twelve district banks. The second promise was that the government would accept the notes in payment of taxes. This is what I described in last week's post as twintopt, or the MMT/Wicksteed idea of tax receivability. The third promise was to uphold the gold standard, both the Fed and the Treasury being obliged to redeem notes with the yellow metal. And the fourth and final promise was to redeem notes with something called lawful money.

Let's focus on this last promise, which is the most curious. What does lawful money mean? The Fed gives a brief description in their FAQ, the summary of which is: it's complicated.

Before the Fed's founding in 1913, the U.S. issued a smorgasbord of different government currencies, as the chart below illustrates. The most important of these issues was United States notes, otherwise known as greenbacks. The Treasury was first authorized to issue them when the Civil War broke out, and only in 1994 was it relieved of its its obligation to redeem old United States notes with new ones. 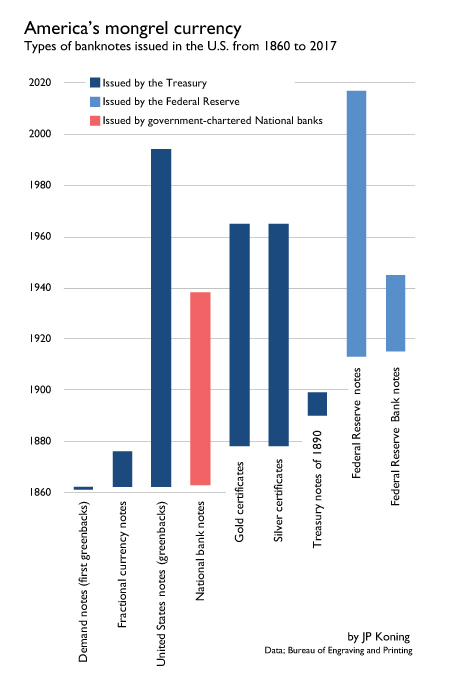 People often assume that government money and legal tender are synonymous, but in actuality there are many examples of government banknotes that have not been legal tender. Take Scotland, for instance, where neither Scottish banknotes nor Bank of England notes currently have legal tender status. U.S. silver and gold certificates, two forms of circulating paper money that were issued by the Treasury through the 19th and 20th century, were not legal tender—at least not till 1919 in the case of gold, and 1934 for silver. Nor were National bank notes a form of legal tender. These were private banknotes issued by banks chartered under the National Bank Act (see chart above). The Treasury promised to accept National bank notes at par in discharge of most Federal taxes, effectively adopting them as their own IOU, yet refused to grant them legal tender status.

While there is no formal definition of lawful money in the 1862 act, we know that it wasn't necessarily legal tender, and we do know that greenbacks fell into said category. Thus a narrow reading of the lawful money promise on a 1914 Federal Reserve note simply meant that they were convertible into United States notes, which by chance happened to be legal tender.

A much broader definition of lawful money would emerge later. By 1935, Fed Chair Mariner Eccles included not only United States notes—greenbacks—but also silver certificates and National bank notes in the category of lawful money (see pdf). William McChesney Martin, who served as Chair from 1951 to 1970, defined lawful money as "any medium of exchange which frequently circulates from hand to hand as money under sanction of the law." (pdf) By this generous definition, lawful money referred to the entire mongrel collection of government currencies, including legal tender United States notes and non-legal tenders such as silver/gold certificates and National bank notes, and finally legacy notes no longer being printed including Treasury notes of 1890, fractional currency, and old demand notes.

The upshot is that the original promise to redeem Federal Reserve notes with lawful money effectively linked what was then a novel currency to the medley of recognizable government currencies already in use. This promise would have provided the public with much-needed continuity between the familiar and not-so-familiar. After all, the Fed was a new institution that had not yet earned credibility. Tying its obligations closely together with greenbacks and/or every bit of paper then in existence would have helped its cause. 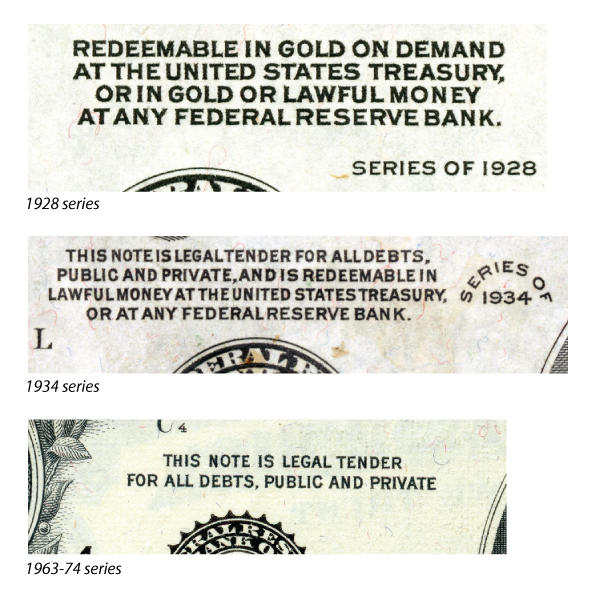 You can see that the 1928 series no longer included either the first (receivability at banks) or second promises (tax receivability). This was probably for brevity's sake. Even though these promises no longer appeared on Fed notes, they continue to be enshrined in Section 16.1 of the Federal Reserve Act. So when you do your taxes in 2018, the Treasury is obligated to accept notes as payment, just as they were in 1914, even though this isn't indicated on the face of a banknote.

When the 1934 series was printed, the third promise—to redeem in gold on demand—was dropped, both from the face of banknotes and the Federal Reserve Act itself. The U.S. had formally gone off the gold standard that year. Where before any member of the public could have walked into any Treasury office or Federal Reserve district bank and asked to have their banknotes redeemed with gold, neither institution was obligated to uphold this promise anymore. As of 1934, the Treasury would only buy gold from miners and other central banks at a rate of $35 per ounce—but this obligation didn't show up on the face of a Federal Reserve note, nor in the Federal Reserve Act. The promise to purchase gold at $35 was an informal one, with President Roosevelt remarking that the price "may be changed by the Secretary of the Treasury at any time without notice."

For almost thirty years nothing changed on the face of Federal Reserve notes until 1963 when the redeemable in lawful money promise was dropped, leaving only the stipulation that a note was legal tender for all debts, public and private.

By 1963, America's mongrel currency was pretty much a thing of the past. Ever since 1934 it had been illegal for gold certificates to circulate publicly. As for National bank notes, they had begun to be retired in 1935. The effort to remove silver certificates in denominations of $5 and above was initiated by John F. Kennedy in 1961. Getting rid of the $1 silver certificate was a bit more tricky. Believe it or not, but at the time there was no such thing as a $1 Federal Reserve note. For decades the nation's entire demand for $1 notes had been met solely by the Treasury's silver certificates. However, in 1963 the Fed finally debuted its first $1 note, upon which the Treasury began to cancel $1 silver certificates.

The Fed didn't start issuing $1 bills till 1963. Before then, all $1 notes were in the form Treasury-issued silver certificates (see top). pic.twitter.com/AZEEwPLKVX
— JP Koning (@jp_koning) August 3, 2017


With most of the government's parallel currencies retired, the promise to redeem Federal Reserve notes in lawful money probably seemed pointless, if not confusing. Thus it no longer shows up on bills, despite being still encoded in section 16 of the Federal Reserve Act. In 2017, you can bring your note to a Federal Reserve for redemption in lawful money, but they will only give you another Fed note in return. The category of lawful money is meaningless.

Most members of the public don't know how the underlying monetary systems work, but they do see what is printed on its banknotes. To the public, the morphing set of promises on the face of a Federal Reserve note would have been one of the more visible manifestations of a shift from a mish mash of paper currencies issued by two different institutions and pegged to gold... to one single legal tender currency issued by the U.S.'s now-dominant monetary institution, the Fed—the Treasury receding into the background.

It's been over fifty years since the promise on Federal Reserve notes was last changed. What promises will be printed on U.S. money in the future? That's hard to say since we don't even know if paper money will be a part of the future. If the Fed were ever to update its currency by introducing a digital version to circulate along with its paper issue, those in charge of its design would have to think hard about the sorts of promises that will be granted to the bearer of those tokens. Would they be lawful money, tax receivable, and/or legal tender? These are questions that U.S. monetary authorities haven't had to ask themselves in a long time, not since the mongrel currency era when new money was introduced every decade or two.
Posted by JP Koning at 11:03 PM