David Glasner noticed a very interesting anomaly yesterday. In short, 5-year TIPS rates seem to be rising while 10-year TIPS have been falling. He encouraged his readers to do some investigating to find out why. See my findings below.

Rather than using the constant-maturity TIPS yields as my starting point (which come with 5, 7, 10, 20, and 30 terms) I looked at actual TIPS yields. I was interested to learn that constant-maturity yields are not market yields. Rather, they are derived from a statistical method that smooths actual yields in order to compute a surrogate constant yield. Constant yields are useful because they provide continuity, but it is easy to forget that the market yields are the true parent data series upon which they are based.

Below is a chart showing market 10-year TIPS yields for various TIPS vintages since 2006. 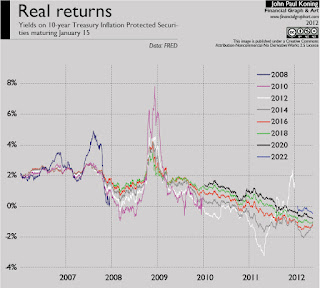 What is evident is that anomalies have happened before. While 10-year TIPS yields in general follow each other in the same direction, there have been periods when the nearer TIPS, those with the least amount of time till maturity, jog out of line. The current anomaly noted by David is illustrated in the above chart by the 2014 TIPS moving up, indeed crossing above the 2016 vintage, whereas the 2018, 2020, and 2022 vintages have continued to fall.

But there are other anomalies. In early 2011, the 2012 vintage began to move up dramatically, followed at a slower pace by the 2014 vintage. But the vintages between 2016-2022 continued to fall. In spring of 2010, the 2012 vintage again had a sharp rise whereas the later vintages fell.

In short, it seems to me that the nearest TIPS vintages are the most sensitive ones. Sensitive to what? TIPS promise to pay a fixed rate of interest and a variable return of principal. The amount of principal that is finally returned depends on the rate of inflation. The more inflation, the more principal is returned. On the other hand, if the market expects that, in the short-term, a negative rate of inflation will prevail, then the amount of principal returned can be expected to shrink, the price of near TIPS will  have to fall in value, and their yields rise. Longer term TIPS investors are less worried because they expect that after a short period of negative inflation, a normal 1-3% rate of inflation will again prevail. As such, the principal they can expect to enjoy should not have declined by very much. Distant TIPS therefore will be less sensitive to short-term worries about negative inflation.

Below I recreate David's chart to show just how much more sensitive the near TIPS are (I use the 2014 10-year TIPS) relative to the 5 and 10-year constant return data sets. 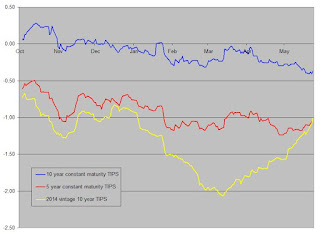 If near-term TIPS serve as the best canaries-in-the-coal-mine, then the 2014 10-year TIPS has been indicating growing wariness of falling/negative inflation since early March. This wariness only began to show up in the 5-year constant maturity data in early May.

It is interesting to note that the early March bottom in the 2014 10-year TIPS yield corresponds with the early March top in the major European equity markets (US markets topped later). This is significant because in regular times, equity markets show little correlation with inflation expectations. But at the zero-lower bound, an expectation of increasingly negative inflation can only be equilibrated by a rise in the real return. This is facilitated by a sharp drop in asset and equity prices. This is explained in much depth by David Glasner here.

To flesh this out, I show below the S&P 500 overlain with various 10-year TIPS yields, which are displayed on an inverted scale to make comparison with equity prices easier. 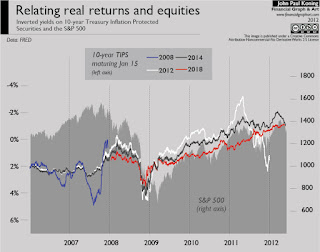 Note how well the near TIPS, those most sensitive to changes in inflation expectations, move with equities. The distant TIPS, say the 2018 vintage, are less likely to move along with asset prices.

One other theory for the relative sensitivities of TIPS was pointed out by commenter David Pearson in Glasner's post. TIPS vary in marketability, some are easier to sell than others. On-the-run issues, those which have just hit the market, tend to be the most liquid. They therefore earn a larger liquidity premium. TIPS that have been on the market for a longer period of time are less liquid and therefore earn a much smaller liquidity premium. One reason that near term TIPS yields could be rising so quickly (and their prices falling) is that the market is demonstrating an increased preference for the liquidity of on-the-run issues relative to off-the-run issues. In other words, the recent anomaly in TIPS could be due to reasons other than changes in inflation expectations.

One reason I think that changes in inflation expectations are to blame for the anomaly and not an increased preference for on-the-run issues is the chart below: 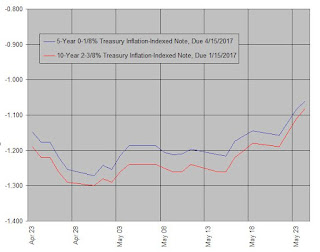 If there was a general push to invest in on-the-run TIPS, one would expect the 5-year yield to be falling or flat and the 10 year rising. Yet the yields on both these instruments has been appreciating at roughly the same speed. Something other than a preference for on-the-run liquidity must be driving the anomaly, and my guess it is the growing expectation of near-term negative inflation.

Note: This paper may give some clues: "Under standard inflationary conditions, the value of the deflation protection should not play an important role in TIPS bond pricing since the probability of having negative net accrued inflation compensation at maturity is negligible; that is, the option was well out-of-the-money. However, at the peak of the financial crisis in the fall of 2008, neither the perceived nor the priced probability of deflation were negligible. In that case, a wedge can develop between the prices of seasoned TIPS bonds with a significant amount of accrued inflation compensation and recently issued on-the-run TIPS bonds, which have no cumulated inflation compensation. As suggested by Wright (2009), this wedge is a proxy for the value of the TIPS deflation protection option."

Note: This paper describes how to conceptualize an investment in TIPS: "In terms of pricing, the inflation-adjustment scheme implies that, in nominal terms, a long position in a pure-discount inflation-protected bond is equivalent to an unadjusted (nominal) Treasury bond and a long position in a European call option written on a fully-adjusted (real) pure-discount riskless bond. This implies, that if in total the CPI increases over the life of the bond, at maturity the bondholder will exercise the call option and swap the nominal bond for the upward-adjusted principal of the real bond. On the other hand, in case of deflation over the life of the bond, the call will expire worthless leaving the bondholder with the unadjusted principal payment of the nominal bond.

"Alternatively, in real terms a long position in a pure-discount inflation-protected bond is equivalent to a fully adjusted (real) riskless bond and a long position in a European put option written on a real pure-discount riskless bond. This implies, that in case of inflation over the life of the bond, at maturity the put option will expire worthless leaving the bondholder with the fully adjusted principal of the real bond. On the other hand, in case of deflation over the life of the bond, the bondholder will exercise the put option and swap the real bond for the unadjusted principal payment of the nominal bond."
Posted by JP Koning at 12:44 AM