Bank of Canada watching - what's up with the balance sheet?

Normally this blog is just a comment aggregator, but once in a while I write a substantial post. Here’s one.

Before exploring the reasons for these changes, as always I like to put the data into charts for context. As my first chart entitled North of 10% shows, BoC assets have only grown this fast a few times over the last few decades, mostly during crisis points like Y2K and 9/11. Giddy stuff. 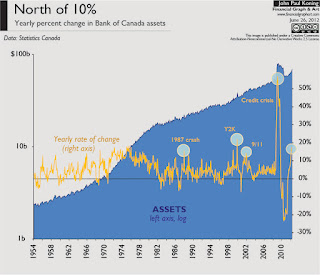 The chart entitled Flight of the loon decomposes the growth of the BoC’s balance sheet into various components since 1981. If you look at the most recent twelve months, you’ll see what I mean about government deposits. Since last fall they have increased from under $1 billion to over $8 billion. On the asset side of the Bank’s balance sheet, this has been compensated by an increase in government bonds held by the Bank (the red bit). 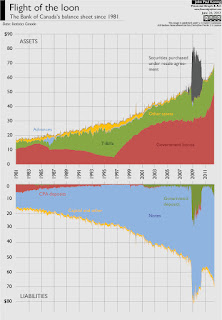 All of this pales in comparison to what happened during late 2008 and early 2009, of course. This older period deserves a revisit. (The next ten paragraphs or so digress from the main topic – why the BoC’s balance sheet is growing now – so skip them if you wish).

In September 2008, as the Lehman crisis reverberated through the financial world, the Bank of Canada began to conduct large scale purchases of assets with Canadian private banks and other financial institutions.  The securities purchased were comprised of federal and provincial debt, Canada Mortgage Bonds issued by the Canadian Housing Trust, NHA MBS, as well as straight corporate bonds and asset backed commercial paper. These assets are represented by the gray section of the assets part of the above chart.

In making these purchases the Bank of Canada was flooding the banking system with its own liabilities, otherwise known as clearing balances. The latter are accounts held at Bank by the commercial banks, and represent an obligation of the Bank of Canada. In our chart, these accounts are referred to as CPA deposits, where CPA refers to Canadian Payments Association. All large banks are members of the CPA and maintain clearing accounts at the Bank of Canada. This flood of balances would have threatened to send Canadian overnight lending rates plunging below their targets if they weren't simultaneously canceled out by equal and opposite transactions. This sort of central bank action is called “sterilization” in monetary economic lingo.

Looking at the chart, it is evident that the BoC sterilized their large scale purchases as there was no large increase in CPA deposits outstanding on the liability side of the Bank’s balance sheet, nor did overnight rates collapse. Instead, there was a large increase in government deposits. What happened here? Well, it’s not entirely clear. In all my Googling I haven’t found a single explanation by the Bank on how this was achieved.

In this paper, Marc Lavoie and Mario Seccareccia describe the mechanism in this way:

However, as happened with the Fed, from mid October on, the Bank of Canada started to follow a different approach in its efforts to provide more liquidity to term credit markets. From then on, the size of the balance sheet of the Bank of Canada grew very quickly, as the Bank was acquiring treasury bills newly issued by the Government of Canada, providing the Canadian government with deposits at the Bank in return. The acquired treasury bills were then sold in turn to the banks as a way to neutralize the effects of the liquidity-creating term repo operations. In so doing, the Bank managed to keep its stock of treasury bills at an approximately constant level, while the size of its balance sheet grew by the sum of the granted term advances and term PRAs.

I’m not sure how much of the above is Lavoie and Seccareccia’s perception of events and how much is based on documented Bank of Canada descriptions of events. I haven't been able to confirm the former with the latter.

If we are going on hunches, I think the sterilization probably happened in a different manner. Private financial institutions began to buy up new t-bills issued by the Federal government in earnest beginning in September 2008 at the same time that the Bank of Canada began its large scale purchases. These t-bill purchases meant the government now held significant quantities of deposits in the private banking system. By transferring those deposits from the private banking system to the Bank of Canada, the Federal government could neutralize the effects of the BoC's large scale purchases. The excess quantity of clearing deposits created by the latter were effectively converted into government deposits, removing the excess. This is the old “drawdowns and redeposits" mechanism, nowadays referred to as the Receiver General cash balance auction. Through a twice daily auction, the RG determines what portion of the government's short term deposits should be allocated to the private banking system and what part should stay in the Bank, and the rate it will receive from private banks on those deposits.

Anyways, both Lavoie/Seccareccia route and mine lead to the final resting place. And both their mechanism and mine might have been simultaneously in effect, as well. But I still think the majority of the sterilization would have come from Receiver General auctions. Why? We know that the BoC’s asset purchases increased in size from zero to over $38 billion by the end of December. If Lavoie and Seccareccia are right that the sterilization of these purchases occured via BoC sales of t-bills, then it would have been necessary for the Bank to auction off some $38 billion in t-bills. But over that same time frame the Bank announced auctions worth only $15.8 billion worth of t-bills. Much of this would have been from its existing stock of t-bills. Because Lavoie and Seccareccia can’t account for the majority of t-bill sales that would be necessary to fully sterilize the $38 billion in large scale purchases, the only mechanism available to fill the gap are Receiver General auctions of government deposits. There may have been some direct purchases of t-bills from the government in order to resell them to the banking system, but not as much as the above authors seem to beleive. But I'm open to being convinced otherwise.

Government deposits at the Bank of Canada have been rising over the last twelve months for much more banal reasons than crisis like Y2K or 9/11.

As part of the June 2011 Budget, the Government of Canada tabled a prudential liquidity management plan. This plan involved the government building up a $35 billion cash cushion to “safeguard its ability to meet payment obligations in situations where normal access to funding markets may be disrupted or delayed.” Of this $35 billion in extra liquidity, $10 billion was to be allocated to foreign reserves (primarily US dollar denominated), $20 billion to be held at the Bank of Canada, and another $5 billion to be deposited at private institutions (see pdf)

The recent expansion in the Bank of Canada’s balance sheet is largely due to the debut of this prudential liquidity plan. Government deposits at the Bank, which spent most of 2011 between $1 and $2 billion, began to steadily rise last October and now clock in at $8.5 billion.

These deposits have been growing as a result of increased direct purchases of government debt by the Bank of Canada. Typically, the Bank buys a minimum percentage of the amount of bonds being auctioned in government debt auctions. On October 19, 2011, the Bank announced that it would be raising its allocation from 15% to 20%. As a result of its more aggressive purchasing commitment, Bank of Canada holdings of Government of Canada bonds have grown from $40 to $50 billion in just a few months.

By 2014, the amount of government deposits at the Bank should have increased to around $22 billion ($20 billion to satisfy the requirements of the prudential liquidity plan, and another $2 billion or so for normal operating balances). Bank of Canada assets, mostly government bonds, will have increased by that same amount.

A few scattered questions and comments before I sign off.

US readers will notice that for better or for worse, the Bank of Canada can do something the Fed cannot -  buy government debt directly from the executive branch of the government.

The Federal government evidently feels it needs to build up a cushion to safeguard its ability to meet obligations should funding markets freeze up. But if the Bank of Canada can simply increase the amount of government debt it purchases at auctions, one wonders why the government feels that it need ever worry about liquidity to begin with. I think the answer is somewhere along the lines of... markets don't mind if you monetize government debt in good times, it might be taken poorly during difficult times. So better to do it now.

At some point, the government may spend those deposits. Does the Bank have a plan in place to ensure that the government can spend them without influencing the overnight rate and therefore the ability of the Bank to target inflation? For instance, in a liquidity event in which the government has troubles issuing debt to the market, it will have to spend down its deposits at the Bank of Canada. But the Bank will have to simultaneously sell bonds in its portfolio in order to sterilize the government's spending. If it doesn't, there will be an excess position in LVTS and the overnight rate will fall below its target. How easily, both technically and politically, will it be to sell government bonds when they are less liquid than before?

Lastly, is the prudential liquidity plan really just a way for the government to lock in low interest rates? By selling low coupon debt to the BoC and holding it there interest free (all BoC profits flow back to the government), the government avoids the necessity of having to issue long term debt at potentially higher interest rates in the future. Do the BoC and Finance Department know something that we don’t – that they expect to be raising rates soon?
Posted by JP Koning at 10:31 PM