How Irish pubs helped cure a shortage of safe assets 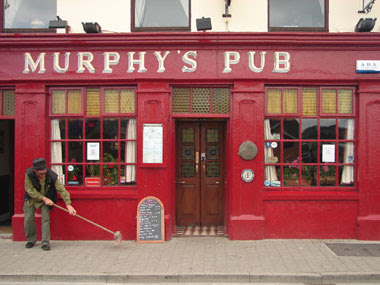 By way of David Andolfatto's comment on my earlier post on safe assets, I stumbled onto a talk by John Moore and Nobuhiro Kiyotaki called Evil is the Root of All Money, which in turn invokes a 1978 paper by Antoin Murphy called Money in an Economy Without Banks: The Case of Ireland (pdf link). For anyone interested in the conjunction of history of economic thought and economic history, Murphy is a great resource. I definitely suggest his The Genesis of Macroeconomics.

Murphy's paper describes an interesting episode in Irish financial history. From May 1 to November 17, 1970, all banks in Ireland went on strike. This meant that Irish bank deposits were indefinitely frozen. Despite being deprived of a large chunk of their safe and liquid assets, the Irish populace managed to soldier on with little economic difficulty—according to Murphy, retail sales were barely affected by the bank closures.

Ireland filled the void vacated by frozen deposits by using uncleared cheques as a circulating medium. Cheques are normally accepted with the intention of quickly cashing or depositing them. During the strike, an Irish family could now sign and spend a cheque at the grocer for food, and the grocer in turn could pass off that family's cheque to the local pub for a beer, who in turn was free to spend it onwards. Thus cheques boomeranged around the economy, even though they could not be cleared and no one knew when the banking system would reopen.

The genius of this system is that it resorted to an unused asset to create the new circulating medium: personal credit. Says Murphy:


In a normal banking system cheques are readily acceptable because it is believed that they are drawn against known accounts and will be cleared quickly. During the bank disputes they were drawn, not against known credit accounts or allowed overdraft limits, but against the value of other uncleared cheques and/or the transactor’s view as to his creditworthiness.

The tight-knit nature of Irish society allowed for an informal credit-rating network which, according to Murphy, was underpinned by Irish public houses. At the time, there was one pub for every 190 adults. The information that various retail outlets had about their customers allowed them to verify the ability of individuals to stand by their credit. This system had a degree of sophistication, since cheques were not universally accepted but rather were graded by risk.

This illustrates one of the ideas that I was (perhaps ineptly) trying to explain in my previous post. Just as the Irish quickly fabricated safe and liquid assets when their existing ones disappeared, wouldn't a modern shortage of safe assets be remedied in a few weeks, maybe months? What is blocking the same set of powerful market forces that quickly resupplied the Ireland with safe assets from operating today? Won't a rise in existing safe asset prices provide the economy with the desired level of safety? An excess demand for safe assets just doesn't sound like it can be a chronic problem to me.

In any case, give the Murphy paper a read. It has some gems in it.
Posted by JP Koning at 12:24 AM