Milton Friedman and the mania in "copy-paste" cryptocoins

When I last wrote about alternative cryptocoins — the universe of small bitcoin competitors — TerraCoin and PPCoin had just debuted, but by and large the list was a relatively stable one that included Litecoin, Namecoin, Devcoin, and a few non-functioning coins. All of these alt-coins paled in size and breadth to Bitcoin, of course, and as the chart below shows, this dominance continues to be the case.

Since April, what was once a trickle of new alternative cryptocoins has turned into a veritable flood. Nowadays, a new coin is being announced every day, and it isn't rare for two or three to debut on the same afternoon. Almost all of these are "copy-paste" coins. Their creator simply takes the source code of a previous coin (usually Litecoin), alters a few parameters, and then announces its debut on the alternative crypto-currency forum at Bitcointalk.

Most of the changes implemented by new alt-coins are arbitrary. RichCoin, one of the newest coins, sets an 88.88 million upper limit for the number of coin in existence and a block reward of 88 coins, presumably to appeal to the Chinese user (Bitcoin has a 21 million upper limit and block reward of 25). FastCoin targets a block generation rate of twelve seconds, compared to Litecoin's 150 seconds, and Bitcoin's nine minutes. These are little more than cosmetic modifications that involve changing a variable or two in the initial source code.

New issuers usually jazz up their coin with a cheezy logo made in MS Paint, a website, and a silly gimmick, like SexCoin did by proclaiming itself as the coin "for the adult industry". Sometimes their creators forget to erase references to the coin they've copied. YACoin, for instance, launched May 6, was mocked for accidentally including NovaCoin's logo on its client, the coin from which YACoin drew its sourcecode. Apart from amusing errors like these, it seems that creating your own coin these days is as easy as printing up business cards. In fact, this blog post provides a complete guide for coining one's own fiat alt-chain.

Here is a partial list of new coins and issue dates. You can find the definitive list here: 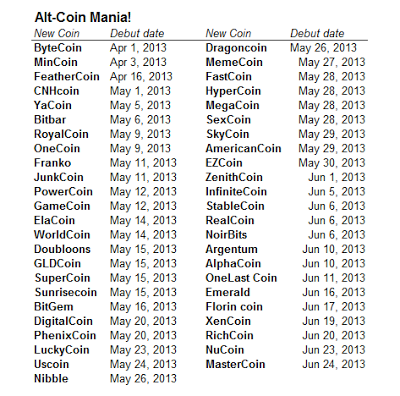 The great alt-coin rush seems to be a fine illustration of Milton Friedman's views on privately-issued inconvertible fiat money. As long as the reigning intrinsically valueless currency like Bitcoin, Litecoin, and others have a positive price, individual issuers will have an incentive to (almost costlessly) copy and paste new clones into existence in an effort to capture the premium.


So long as the fiduciary currency has a value greater than its cost of production—which under conditions can be compressed close to the cost of the paper on which it is printed—any individual issuer has an incentive to issue additional amounts. A fiduciary currency would thus probably tend through increased issue to degenerate into a commodity currency—into a literal paper standard—there being no stable equilibrium price level short of that at which the money value of currency is no greater than that of the paper it contains. [1960, A Program for Monetary Stability]

A great example of Friedman's dictum is the odd case of Somali shillings, vividly illustrated by William Luther. Though the Somali central bank was destroyed in 1991, shillings continued to circulate. Local businessmen and warlords printed counterfeit shillings and spent them into the local economy until the purchasing power of shillings was driven down to the value of paper, printing, and shipment.

How does the profit incentive work in the case of new alt-coins? Here's how a new issuer makes a profit. Prior to announcing their new coin on Bitcointalk, the issuer "pre-mines" a few million coins for themselves. When the public starts to mine the new coin in earnest and trade it on the forums — a sort of over-the counter-market — the issuers seize the opportunity to sell all the coins that they've premined. More ambitious coin issuers endeavour to have their coin listed on any of the larger formal alt-coin markets like BTC-e or Vircurex, rather than the OTC market. This adds a larger liquidity premium to the coin, thereby improving the price at which the originator can make an exit. The lure of a listing is so tantalizing that NovaCoin, for instance, a coin premiering back in February, initially premined a quantity of coins which it used to payoff BTC-e in order to procure an immediate listing on its exchange (when controversy ensued, this payoff was later rescinded).

Because premining is roundly vilified on the forums, and coin ledgers are public (rendering it fairly easy to determine if a coin has been premined), issuers have resorted to less overt techniques to profit from new issues. Insta-mining is one practice. An issuer and his/her confederates prepare their computers to mine the coin "instantly" upon the coin's public release on Bitcointalk. The ease of mining is set very low for the first few hours, allowing the issuer and his/her friends to snap up a large percentage of coins. Later, when the public begins to participate, the issuer ups the difficulty and sells their booty. In the first twenty-four hours of Feathercoin's existence, for instance, some 2.9 million coins were mined out of a total of 336 million minable coins, far more than would be mined on an average day.

The dozens of coins issued in the last months are largely worthless, or close to it. You can track some of their prices at Cryptsy, an alt-coin exchange. This would seem to bear out Friedman's theory that the price of a competitive fiat currency will inevitably be driven down to zero. Incidentally, that's the same theory I've been adopting in many of my bitcoin posts, and why I (mostly) sold out of the ledger a few months ago.

A major data point seems to disconfirm Friedman's theory. While we've seen a new wave of coins being issued in order to exploit the value differential between cost and market price, these new coins have not been particularly successful in arbitraging away the positive price of the incumbents Bitcoin and Litecoin. When I posted this, Bitcoin's market cap was around $1.1 billion and Litecoin's at around $50 million.

I take two things from this. Either we're still in the short run, and Bitcoin's price will eventually get knocked down to zero.

Alternatively, something else is at work. It could be that cryptocoins are not indistinguishable fiat monies as per Friedman's theory of fiat money but rather are heterogeneous and differentiable. Multiple carbon copies of Bitcoin are simply not enough to arbitrage away the original's value because the earliest mover has superior features compared to late moving clones. To begin with, incumbents like Bitcoin and Litecoin have already attracted a large mining community. The hashing power that the miners bring with them makes the coin more secure against 51% attacks, or forks, than upstart coins that don't have the same degree of mining power. So while the source code for a clone may be identical to the original, the degree of security inherent in each is very different.

Secondly, incumbents will tend to be more marketable. Merchants may have begun to accept them, securities might be denominated in them, and formal exchanges like MtGox offer direct convertibility into US dollars. This liquidity does not emerge in medias reas, or on its own, a fact that puts Bitcoin and Litcoin clones at a disadvantage. Like the security problem above, the liquidity hurdle is difficult to overcome because, chicken-and-egg-like, you can't become liquid or secure without users, but if you're not liquid or secure you don't attract users.

It appears that Milton Friedman is wrong, at least for the time being. Despite the recent onslaught of competing alt-coins, privately-issued fiat currencies like Bitcoin and Litecoin are still worth many millions of dollars. I suppose we'll have to wait another few years to see if Friedman is wrong not just about the short term, but also the long term. Until then, I'll throw in my chips with Friedman. Bitcoin's biggest competitors probably haven't arrived yet.