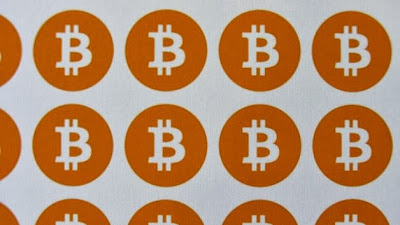 While bitcoin could one day kill most of the roles that the Fed plays, monetary policy will probably stay intact. The reason for this, as I'll show, is that the no matter what happens to all its other functions, the Fed will probably continue to define the economy's unit of account.

Let's start in the present day US. Most modern transactions involve transfers of dollar banknotes, reserves, or dollar-denominated bank deposits. A small minority of transactions are made with bitcoin. But these transactions are rarely priced in terms of bitcoin. Rather, a merchant's website will typically display prices in terms of dollars, and then compute the amount of bitcoin that a customer must fork over by referring to the current dollar-to-bitcoin exchange rate. The dollar is very much the the unit of account in the US, not bitcoin.

The first of the Fed's functions to be killed off by bitcoin will inevitably be the issuance of paper banknotes. Bitcoin enjoys all the benefits of cash, on top of which it can be transferred instantaneously over long distances. Bulky hand-to-hand paper simply can't compete. Unwanted notes will reflux back to banks and then to the Fed. From there Fed officials will cancel and destroy them, the Fed's balance sheet shrinking to a fraction of its previous level. Paper dollars will now be extinct, and the Fed much smaller.

Even with its printing presses idled by bitcoin mania, the Fed will still continue to issue reserves. Reserves are used by banks in the interbank market to settle cheques and make large value payments, normal people don't get to own them.

The Fed has traditionally not paid a pecuniary rate of return on reserves. In other words, it hasn't offered interest. Banks have been willing to hold barren reserves because in addition to their usefulness as payments media, the Fed has exercised its monopoly powers to keep their supply artificially scarce. This combination of usefulness and scarcity conspire to produce significant non-pecuniary benefits that bankers will eagerly pay to enjoy. After all, any banker that holds a base level of scarce reserves can rest easy knowing that they are well-prepared for an uncertain future—a banker that forgos them must bear the discomfort of being ill-equipped to deal with unforeseen events.

The Fed can alter the relative scarcity of reserves via open market operations. This in turn either increases or decreases the non-pecuniary return on reserves, or their marginal usefulness.  If increased, the rush to buy reserves causes economy-wide fall in the price level. If decreased, a rise ensues. Thus even though bitcoin has rendered cash extinct, the Fed's power over the economy isn't diminished one iota since prices continue to be priced in the dollar unit of account, and the Fed's artificially scarce reserves are effectively the medium that defines the unit.

But say that bitcoin and a raft of other alt-coins become popular among banks as a way to settle payments among each other. Say these new electronic media are blazingly fast, safer, and far cheaper than the Fed interbank alternative. Banks, their electronic vaults full of bitcoin, no longer want to hold reserves and are lobbying the Fed governor to buy them back with the assets the Fed holds in its vaults. Should this happen, the Fed's balance sheet is set to contract to zero—into irrelevance.

At this point the Fed will have effectively lost its tight grip on the market for interbank settlement media. Reserves will neither be special nor scarce—banks can now hold a wide variety of assets as interbank media. The Fed finds itself powerless. Its traditional tool for manipulating the price level has always been to lever its monopoly power so as to fiddle with the relative scarcity—or specialness—of highly-liquid reserves. But this tool is gone. It can't do anything to control the price level. As for the media it once issued, both cash and reserves have lost their distinct characteristic as "money". They are no longer the most liquid assets in the economy, having been displaced by cryptocoin.

However, this ignores the fact that even though reserves have lost all their monetary usefulness in the face of cryptocoin competition, the Fed still has one other tool at its disposal—it can start to pay a pecuniary return, or interest, on reserves. By raising or lowering the interest rate it offers, it can either entice or repel banks to hold more or less reserves at any given price level. Since the economy's prices continue to be expressed in terms of the dollar, the Fed can now manipulate the economy-wide price-level by jacking up or reducing interest on reserves. Even if there are only a piddling $20 million worth of illiquid reserves outstanding, the Fed can still get a bite on the macroeconomy by changing rates.

So to sum up, though cash has gone the way of the dodo bird, and the Fed has lost its clearinghouse monopoly, and bitcoin is gushing everywhere, the Fed can still exert itself over the economy because it issues the one special asset that defines the unit of account—reserves.  Monetary policy can still exist in a world without central bank money.

The Fed would only become truly powerless when economic actors choose to price their goods in terms of cryptocoin. At that point, Fed reserves will have lost all their traditional uniqueness—they will be just one fixed-income asset among a sea of many millions of fixed-income assets. The economy's unit of account will be BTC, and the economy-wide price level will now be driven by the vicissitudes of the demand and supply of bitcoin. But a switch in the unit is unlikely since the network effects generated by centuries of tradition are in the dollar's favor. For the time being, bitcoin is just too volatile to be used for price expression.

The Fed needn't worry about becoming irrelevant. Hell, it might even learn a bit from the competition along the way.


Along these lines, give Michael Woodford's Monetary Policy in a World Without Money a read. Written in 2000, Woodford tries to answer whether the "development of 'electronic money' poses any threat to the ability of central bankers to control the value of their national currencies through conventional monetary policy." Nine years before bitcoin even arrived on the scene, academic scribblers like Woodford were already mulling over its potential effect on Fed policy. How's that for forward guidance?
Posted by JP Koning at 8:41 AM