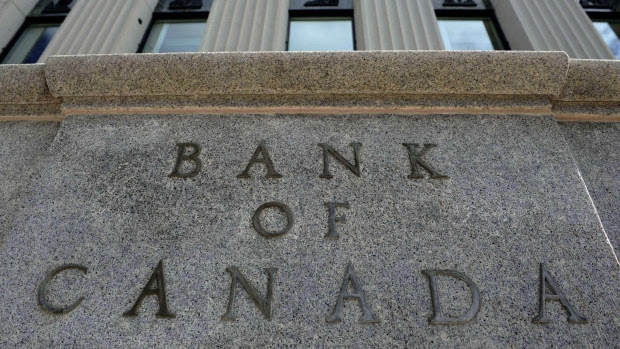 On a recent trip to Ottawa, I stopped by the Bank of Canada. The door was locked and the building empty. Odd, I thought, why would the Bank be closed in the middle of a business day? A security guard strolled up to me and told me that the entire staff packed up back in 2010 and left the country. He hadn't seen them since. Bemused I walked back to my hotel wondering how it was that with no one guiding monetary policy, the loonie hadn't run into either hyperinflation or a deflationary spiral.

Exactly 175 months passed between February 1996, when the Bank of Canada began to target the overnight rate, and September 2010, the date of the Bank's last rate change. Some 63 of those months bore witness to an interest rate change by the Bank, or 36% of all months, so that on average, the Governor dutifully flipped the interest rate switch up or down about four times a year. Those were busy years.

Since September 2010 the Governor's steady four-switches-a-year pace has come to a dead halt. Interest rates have stayed locked at 1% for 51 straight months, more than four years, with nary a deviation. I enclose proof in the form of a chart below. Not only has the Bank of Canada been silent on rates, it hasn't engaged in any of the other flashy central bank maneuvers like quantitative easing or forward guidance. In the history of central banking, has any bank issuing fiat money (ie. not operating under a peg) been inactive for so long?


Now the Bank of Canada will of course insist that you not worry about the lack of activity, its staff is still toiling away every day formulating monetary policy. But maybe the security guard was right. How do we know they haven't all been on an extended four-year vacation, hanging out in Hawaii or Florida? Who could blame them? Ottawa is awfully cold in the winter! With no one left at the Bank to flip the interest rate switch, that's why it remains frozen in time at 1%.

In theory, the result should be disastrous. With no one manning the interest rate lever, the price level should have either accelerated up into hyperinflation or downwards into a deflationary spiral. Why these two extreme results?

In theory, there is no natural escape from these processes. The Bank needs to intervene and throw the interest rate lever hard in the opposite direction in order to pull the price level out of its hyperinflationary ascent or deflationary descent.

By the way, if this is all a bit boring, you can get a good feel for things by playing the San Francisco Fed's So you want to be in charge of monetary policy... game for a while. When you play, try keeping the interest rate unchanged through the course a game—you'll set off either a deflationary spiral or hyperinflation. Be careful, this game can get a bit addicting.

The upshot of all this is that with the Bank of Canada policy team on holiday and the policy rate stuck at 1%, any rise (or fall) in the Canadian natural interest rate is not being offset by an appropriate shift in the policy rate. Prices should be trending sharply either higher or lower.

However, a glance at core CPI shows that Canadian inflation has been relatively benign. Canada has somehow muddled through four years with no one behind the monetary rudder. How unlikely is that? Imagine Han Solo falling asleep just prior to entering an asteroid field only to wake up eight hours later to discover he'd somehow brought the ship through unscathed. We already know that the possibility of successfully navigating an asteroid field is approximately three thousand seven hundred and twenty to one—and that's with Han awake. If he's asleep, the odds are even lower. By pure fluke, each asteroid's trajectory would have to avoid a sleeping Han Solo's flight path in order for the Millennium Falcon to get through.

Success seems just as unlikely for the Bank of Canada. For us to have gotten this far with no one behind the wheel, the return on capital must not have changed at all over the last four years, the flat 1% interest rate thus being the appropriate policy. Either that or the return on capital zigged only to zag by the precise amount necessary to cancel out the zig's effect on the price level. However, I find it unlikely that the economy's natural rate of interest would stay unchanged for so long, or that its zig zagging was so fortuitous as to preclude a change in rates.

Alternatively, it could be that Canadians assume that the Bank is being vigilant despite the fact that the entire staff has skipped town. Even if a difference between the rate of return on capital and a rate of return on money arises thanks to normal fluctuations in natural rate of interest, Canadians might not take the obvious trade (buy higher yielding capital, sell low-yield money) because they think that the Bank will react, as it usually does, in the next period by increasing the rate of return on money. And with no one taking the trade, inflation never occurs. But is it safe to assume that people are willing to leave that much money on the table?

Another possibility is that the traditional way of thinking about monetary policy needs updating. I considered this possibility here. In short, when the return on Bank of Canada liabilities lags the return on capital, rather than a perpetual acceleration developing the price level stabilizes after a quick jump. This sort of effect could arise from central bank liabilities having some sort of fundamental value. Once the purchasing power of these liabilities falls low enough, their fundamental value kicks in, closing the rate-of-return differential between capital and money and preventing a hyperinflation from developing. So even with no one manning the Bank of Canada interest rate lever, the fundamental value of Bank of Canada liabilities provides an anchor of sorts, explaining why prices have been stable over the last few years.

I may as well come clean about the Bank of Canada. They haven't all gone to Hawaii. The real reason its HQ on Wellington Street was shut the day I visited is that it's being renovated. Rest assured the whole crew is hard at work at a temporary spot elsewhere. But does it make a difference? The monetary policy staff may just as well have gone to Hawaii in 2010. With the interest rate lever neglected and rates frozen at 1%, the evidence shows that prices would not have been sent off the rails, despite the fact that returns on capital surely jumped around quite a bit. It's all a bit odd to me.
Posted by JP Koning at 10:15 PM