I have been hitting my head against the wall these last few weeks trying to understand Chinese monetary policy, a project that I've probably made harder than necessary by starting in the distant past, specifically with the nation's experience during the Great Depression. Taking a reading break, I was surprised to see that Paul Krugman's recent post on the topic of freshwater macro had surprising parallels to my own admittedly esoteric readings on Chinese monetary history.

Unlike most nations, China was on a silver standard during the Great Depression. The consensus view, at least up until it was challenged by the freshwater economists that people Krugman's post, had always been that the silver standard protected China from the first stage of the Great Depression, only to betray the nation by imposing on it a terrible internal devaluation as silver prices rose. This would eventually lead China to forsake the silver standard. This consensus view has been championed by the likes of Milton Friedman and Anna Schwartz in their monumental Monetary History of the United States.

This consensus view is a decidedly non-freshwater take on things as it it depends on features like sticky prices and money illusion to generate its conclusions. After all, given the huge rise in the value of silver, as long as Chinese prices and wages—the reciprocal of the silver price—could adjust smoothly downwards, then the internal devaluation forced on China would be relatively painless. If, however, the necessary adjustment was impeded by rigidities then prices would have been locked at artificially high levels, the result being unsold inventories, unemployment, and a recession.

Just to add some more colour, China's internal devaluation was imposed on it by American President Franklin D. Roosevelt in two fell swoops, first by de-linking the U.S. from gold in 1933 and then by buying up mass quantities of silver starting in 1934. The first step ignited an economic rebound in the U.S. and around the world that helped push up all prices including that of silver. As for the second, Roosevelt was fulfilling a campaign promise to those who supported him in the western states where a strong silver lobby resided thanks to the abundance of silver mines. The price of silver, which had fallen from 60 cents in 1928 to below 30 cents in 1932, quickly rose back above its 1928 levels, as illustrated in the chart below. According to one contemporary account, that of Arthur N. Young, an American financial adviser to the Nationalist government, "China passed from moderate prosperity to deep depression." 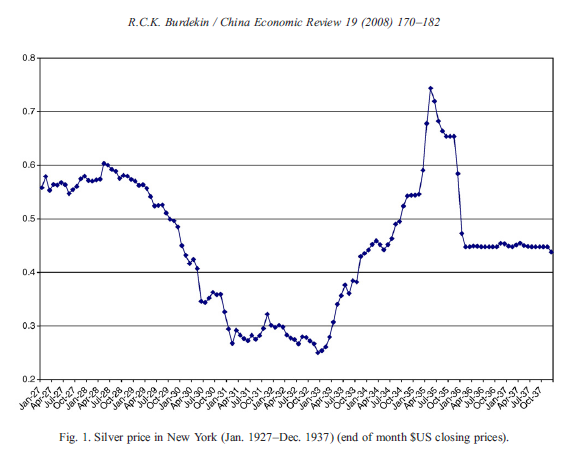 As I mentioned at the outset, this consensus view was challenged by the freshwater economists, no less than the freshest of them all, Thomas Sargent (who was once referred to as "distilled water"), in a 1988 paper coauthored with Loren Brandt (RePEc link). New data showed that Chinese GDP rose in 1933 and only declined modestly in 1934, this due to a harvest failure, not a monetary disturbance. So much for a brutal internal devaluation.

According to Sargent and Brandt, it appeared that "that there was little or no Phillips curve tradeoff between inflation and output growth in China." In non econo-speak, deflation.not.bad. They put forth several reasons for this, including a short duration of nominal contracts and village level mechanisms for "haggling and adjusting loan payments in the event of a crop failure." In essence, Chinese prices were very quick to adjust to silver's incredible rise.

Four years later, Friedman responded (without Schwartz) to what he referred to as the freshwater economists' "highly imaginative and theoretically attractive interpretation." (Here's the RePEc link). His point was that foreign trade data, which apparently has a firmer statistical basis than the output data on which Sargent and Brandt depended, revealed that imports had fallen on a real basis from 1931 to 1935, and particularly sharply from 1933 to 1935. So we are back to a story in which, it would seem, the rise in silver did place a significant drag on the Chinese economy, although Friedman grudgingly allowed for the fact that perhaps he may have "overestimated" the real effects of the silver deflation.

So this battle of economic titans leads to a watered-down story in which Roosevelt's silver purchases probably had *some* deleterious effects on China. China would go on to leave the silver standard, although what probably provided the final nudge was a bank run that kicked off in the financial centre of Shanghai in 1934. Depositors steadily withdrew the white metal from their accounts in anticipation of some combination of a devaluation of the currency, exchange controls, and an all-out exit from the silver standard, a process outlined in a 1988 paper by Kevin Chang (and referenced by Friedman). This self-fulfilling mechanism, very similar in nature to the recent run on Greece, may have encouraged the authorities to sever the currency's linkage to silver and put it on a managed fiat standard. The Chinese economy went on to perform very well in 1935 and 1936, although that all ended with the Japanese invasion in 1937.

As I mentioned at the outset, these events and the way they were perceived by freshwater and non-freshwater economists seem to me to have some relevance to modern Chinese monetary policy. As in 1934, China is to some extent importing made-in-US monetary policy. The yuan is effectively pegged to the U.S. dollar, so any change in the purchasing power of the dollar leads to a concurrent change in the purchasing power of the yuan.

There's an asterisk to this. In 1934, China was a relatively open economy whereas today China makes use of capital controls. By immobilizing wealth, these controls make cross-border arbitrage more difficult, thus providing Chinese monetary authorities with a certain degree of latitude in establishing a made-in-China monetary policy.  But capital controls have become increasingly porous over the years, especially as the effort to internationalize the yuan—which requires more open capital markets—gains momentum. By maintaining the peg and becoming more open, China's monetary policy is getting ever more like it was in 1934.

As best I can tell, the monetary policy that Fed Chair Janet Yellen is exporting to China is getting tighter. One measure of this, albeit an imperfect one, is the incredible rise of the U.S. dollar over the last year. Given its peg, the yuan has gone along for the ride. Another indication of tightness in the U.S. is Scott Sumner's nominal GDP betting market which shows nominal growth expectations for 2015 falling from around 5% to 3.2%. That's quite a decline. On a longer time scale, consider that the Fed has been consistently missing its core PCE price target of 2% since 2009, or that the employment cost index just printed its lowest monthly increase on record.

If Chinese prices are as flexible as Brandt and Sargent claimed they were in 1934, then the tightening of U.S. dollar, like the rise in silver, is no cause for concern for China. But if Chinese prices are to some extent rigid, then we've got a Friedman & Schwartz explanation whereby the importation of Yellen's tight monetary policy could have very real repercussions for the Chinese economy, and for the rest of the world given China's size.

Interestingly, since 2014 Chinese monetary authorities have been widening the band in which the yuan is allowed to trade against the U.S. dollar. And the peg, which authorities had been gently pushing higher since 2005, has been brought to a standstill. The last time the Chinese allowed the peg to stop crawling higher was in 2008 during the credit crisis, a halt that Scott Sumner once went so far as to say saved the world from a depression.

Chinese GDP [edit: GDP growth] continues to fall to multi-decade lows while the monetary authorities consistently undershoot their stated inflation objectives. In pausing the yuan's appreciation, the Chinese authorities could very well be executing something like a Friedman & Schwartz-style exit from the silver standard in order to save their economy from tight U.S. monetary policy. This time it isn't an insane silver buying program that is at fault, but the Fed's odd reticence to reduce rates to anything below 0.25%. Further tightening from Yellen may only provoke more offsetting from the Chinese... unless, of course, the sort of thinking underlying Wallace and Brandt takes hold and Chinese authorities decide to allow domestic prices to take the full brunt of adjustment.
Posted by JP Koning at 2:30 PM