What if Apple pegged its stock price at $1? 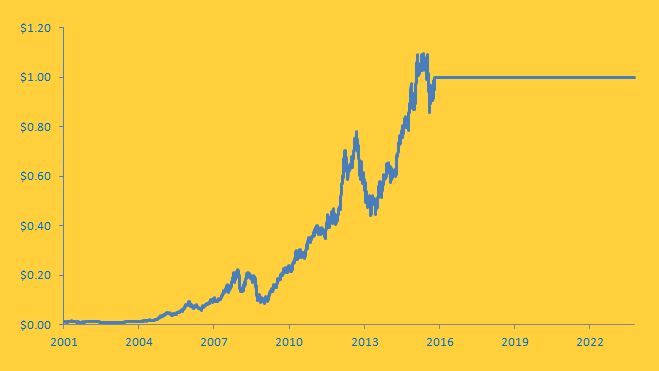 Would it make sense for Apple to peg its stock price at $1? If so, how would it go about doing this?

From the perspective of shareholders, there's an advantage to a firm's shares being valued not only as a pure store of value but also as useful in trade, or as money. All things staying the same, the increase in demand that is created by the monetary usefulness of a share will ratchet up the multiple applied to a firm's earnings, resulting in a higher market capitalization and richer (and happier) shareholders. As long as the costs of making shares more moneylike aren't too high (I'll assume they aren't), Apple will prefer that its shares be ubiquitous and pervade all corners of an economy, much like a U.S. dollar note or a bank deposit.

The problem is that people aren't fond of unstable exchange media (see here & here). Bills and deposits tend to show low price variability. And because retailers keep prices sticky in terms of the unit of account, a $100 deposit or $100 bill is guaranteed to purchase $100 worth of stuff one month hence. Unlike bills and deposits, volatile assets like Apple shares can crater at any moment, thus ruining their effectiveness as a monetary medium.

Could Apple solve this problem? If Apple were to peg its stock price at $1, it would provide individuals with all the benefits of a dollar bill or deposit. Add in some infrastructure for allowing payment via stock (say a permissioned block chain), and demand for Apple shares would treble as they stole business from banks. Apple's market cap would spike.

What about investors, say hedge funds and mutual funds? Why would they want to own an asset that never deviates from $1? They need a return, after all, to justify holding Apple in their portfolio. The answer, in short, is that the peg wouldn't reduce Apple's return to zero; rather, it would change the form of the return. Instead of rewarding shareholders with a higher share price, Apple management would reward them by augmenting the quantity of stable-value shares they own.

Say Apple's earnings are to grow 10% over the course of a year. Without a peg, investors expect one share of Apple, currently trading at $1, to be worth $1.10 in one year, providing a 10% return. With a peg, investors will instead expect the quantity of $1 shares in their portfolio to grow from 1 to 1.1, thus providing the same 10% return. Think of the 0.1 increase in shares as a stock dividend to all existing shareholders.

If Apple has a blowout year and earnings grow 20% rather than just 10%, investor demand for Apple shares will rise, putting upwards pressure on the peg. Management will grant existing owners whatever extra stock dividends are necessary to relieve the pressure. Likewise, a rise in the monetary demand for Apple shares, perhaps due to a liquidity crisis, will by counterbalanced by a stepped up pace of stock dividends, ensuring the peg's integrity.

Conversely, downwards pressure on the peg will be relieved with a series of reverse stock dividends. Shareholders will find that, where before they had $1 share worth $1, they have been docked 0.01 shares and only have 0.99 shares worth $1 dollar.

For the public to accept Apple's pegged shares as an exchange medium, they need to suffer from some sort of money illusion. After all, even though Apple is enforcing its $1 peg and providing nominal stability, this is little more than an illusion. The reverse stock dividend mechanism threatens to reduce the quantity of shares in each individual's portfolios, thus diminishing their overall purchasing power. Will people be fooled by the $1 price? I don't know, but if so, Apple can increase its market capitalization for free and thus enrich its shareholders.

This leads into a bigger question that I'll let others try and answer. What quirks of human psyche (or institutions) lead publicly traded companies to universally set a floating stock price and a fixed quantity of shares? Why not let the quantity float and the price stay fixed? If we were perfectly logical beasts, we should be indifferent between the two.
Posted by JP Koning at 12:56 PM