A recent tweet from Matthew Yglesias made me smile:

Tipping might certainly be one reason for the annual cash spike, but I'd bet if you look at data from Europe where tipping is not a tradition you'll still see a jump.  Because we can't anticipate all the random events that will arise when we travel long distances to meet our loved ones, we purchase insurance in the form of larger cash holdings. Thus you can see a consistent seasonal spike in currency in circulation in the weeks before Christmas. Those amounts falls heavily in January. Having returned to our regular schedules, insurance against uncertainty is no longer necessary so we redeposit our cash at the bank.

The U.S. Christmas spike has gotten less marked over the years, most likely because of increasing usage of U.S. banknotes in non-Christian countries and by criminals. But you can still pick it out on the chart. 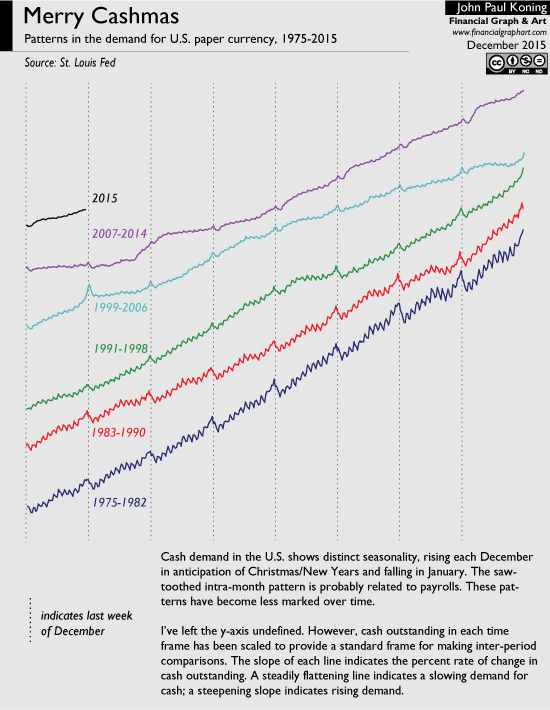 A few differences between my December 2012 post and this one...

Why is this? Well, it has nothing to do with interest rates being near their lower bound. Rather, consider that the U.S. dollar had become quite unpopular as a world transactions medium during the 2000s thanks to its steady decline in value relative to other currencies, especially the euro. Once the euro crisis hit in 2011, that changed. Since then, the U.S. dollar has appreciated relative to almost every currency in the world. Along with this, its cachet outside the U.S. has returned. I go over all these factors in this post.


This may be my last post in 2015, so once again, thanks to all my readers, lurkers, haters, and commenters.

My most popular blog posts this year according to number of page views were:

1. The final chapter in the Zimbabwe dollar saga?
2. Why bitcoin has failed to achieve liftoff as a medium of exchange
3. Freshwater macro, China's silver standard, and the yuan peg
4. Sweden and Peak Cash
5. The ZLB and the impending race into Swiss CHF1000 notes
6. A Lazy Central Banker's Guide to Escaping Liquidity Traps
7. Euros without the eurozone
8. Zimbabwe's new bond coins and the demonetization of the rand

...of which, I'd say my Lazy Central Banker's guide is the most important. For some reason no one liked Why Big Fat Greek Bank Premiums, despite the fact that I think I pretty much nailed it. And as usual, I wrote my share of material that, at the time, seemed stellar to the author but upon rereading a few months later, t'was dreck.

My main blog referrers in 2015 were Mark Thoma, FT Alphaville, Marginal Revolution, Chris Dillow, and David Andolfatto. Thanks!
Posted by JP Koning at 12:36 AM