Is the Fed breaking the law by paying too much interest? 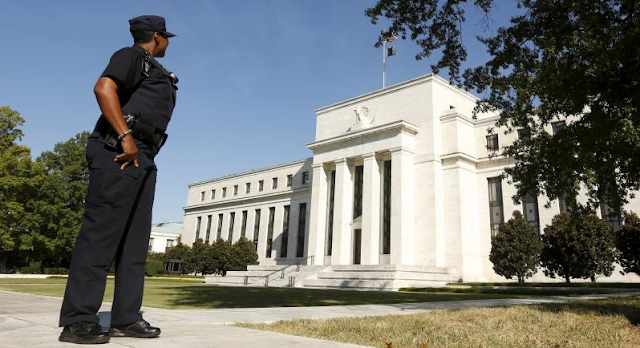 George Selgin had an interesting post describing how the Fed appears to be breaking the law by paying too much interest to reserve-holders. This is an idea that's cropped up on the blogosphere before, here is David Glasner, for instance.

I agree with George that the the letter of the law is being broken. That's unfortunate. As Section 19(b)(12)(A) of the Federal Reserve Act stipulates, the Fed can only pay interest "at a rate or rates not to exceed the general level of short-term interest rates." With three month treasury bills currently around 0.33% and the fed funds rate at 0.4%, the current interest rate on reserves (IOR) of 0.5% exceeds the legal maximum.

Unlike George, I don't think the Fed deserves criticism over this. If the letter of the law is being broken, the spirit of the law surely isn't.

If there is a spirit residing in the law governing IOR, it's the ghost of Milton Friedman. Since the Fed's inception in 1913, IOR had been effectively set at 0%, far below the general level of short term interest rates. This has acted as a tax on bankers. They have been forced to hold an asset—reserves—that provides a below-market return. Friedman's big idea was to remove this distortionary tax by bringing IOR up to the same level as other short term interest rates. Banks would now be earning the same rate as everyone else. The Fed would only get the authority to set a positive rate on reserves in 2008, long after most modern central banks like the Bank of Canada had implemented Friedman's idea.

Friedman wanted to remove the tax, but he didn't want to introduce a subsidy in its place. To prevent central bank subsidization of banks, the Federal Reserve Act is explicit that IOR should not exceed other short-term interest rates.

In practice, how might the Fed set IOR in a way that subsidizes banks? This is more complicated than it seems. If the Fed sets IOR at 1%, arbitrage dictates that all other short term rates will converge to that same level. After all, why would a financial institution buy a safe short term fixed income product for anything less than 1% if the central bank is fixing the yield of a competing product, reserves, at 1%?

Short-term yields won't converge exactly to IOR. Some will trade a hair above IOR, others a bit below. This is because each short-term fixed income product has its own set of peculiarities and these get built into their yield. For instance, buying federal funds is riskier than parking money at the Fed; in the latter transaction the Fed is your counterparty while in the former it's a bank, So the fed funds rate should trade a bit above IOR. But we wouldn't say that a higher fed funds rate is a sign of a below-market return on reserves, or that this spread represents an implicit tax on reserve owners. The fed funds rate exceeds IOR only because that is how the market has chosen to appraise the risk of owning fed funds.

Conversely, because a treasury bill is ofttimes less risky then parking money at the Fed, its yield should regularly dip below IOR. When it does, no one would say that the Fed is providing an unfair subsidy to reserve holders by paying IOR in excess of the treasury bill rate. The lower treasury bill rate is simply the free market's way of accounting for the superior risk profile of treasury bills relative to reserves.

Nowadays, with IOR at 0.5% and treasury bills yielding 0.33%, the Fed is clearly contradicting the wording of the Federal Reserve Act. IOR has been set at a rate that "exceeds the general level of short-term interest rates." But this by no means implies that the Fed is breaking the spirit of the law. The spirit of the law only tells the Fed not to pay subsidies to banks. As I explained above, the yield differential may simply reflect the market's assessment of the unique risks of various short-term fixed income products, not  a policy of paying subsidies.

To get the ghost of Milton Friedman rolling in his grave, here is how to structure IOR so that it offers a subsidy to banks. The Fed would have to set up a tiered reserve system where a bank's first tier of reserves earns a higher rate than the next tier. To begin with, assume that Fed officials deem that a 0.5% fed funds rate is consistent with a 2% inflation target. The Fed offers to pays interest of 100% on required reserves (I'm exaggerating to make my point) while offering just 0.5% on excess reserves. Banks will hold required reserves up to the maximum and reap an incredibly 100% yearly return. All reserves above that ceiling will either be parked at the Fed to earn 0.5% or lent out in the fed funds market.

Thanks to arbitrage, the 0.5% rate on excess reserves ripples through to other short term rates. Because a bank can always leave excess reserves at the Fed and earn an easy 0.5%, a borrower will have to bid up the fed funds rate and t-bill rates to at least 0.5% in order to coax the marginal lender away from the Fed.

And that's how the Fed would subsidize banks. The "general level" of rates as implied by the rate on fed funds and treasury bills hovers at 0.5% while banks are earning a stunning 100% on a portion of their reserve holdings. It's highway robbery! Milton Friedman would be furious; the distortionary tax he so disliked has been replaced with a distortionary subsidy.

By the way, if you really want to know what tiering and central bank subsidies to banks look like, this is the exact same mechanism the Bank of Japan and Swiss National Bank have introduced to help banks deal with negative interest rates. See here and here.

So the bit of legalese that says that IOR should not exceed the "general level of short-term interest rates" is really just a poorly chosen set of words meant to describe a very specific idea, namely, a prohibition against setting a tiered reserve policy where the first tier, required reserves, earns more than the second, excess reserves, the ensuing subsidy flowing through to banks.

At the end of the day, what accounts for the current divergence between IOR and the other short term rates? Because the Fed has not set up a tiered reserve policy, there is simply no way that the divergence reflects a subsidization of banks. There is only one remaining explanation. Peculiar developments in the microstructure of the fed funds and t-bills markets have led traders to discount these rates relative to IOR.

So you can rest easy, Milton.

The peculiarities bedeviling the fed funds market are explained by Stephen Williamson here. There are several large entities, the GSEs, that can keep reserves at the Fed but are legally prevented from earning IOR. Anxious to get a better return, they invest in the fed funds market market, but only a limited number of banks have the balance sheet capacity to accept these funds. This oligopoly is able to extract a pound of flesh from the GSEs by lowballing the return they offer, the result being that the fed funds rate lies below IOR.

As for treasury bills, they are unique because, unlike reserves held at the Fed, they are accepted as collateral by a whole assortment of financial intermediaries. Put differently, treasury bills are a better money than reserves. Because the government is loath to issue too many of them, the supply of treasury bills has been kept artificially scarce so that they trade at a premium, a liquidity premium.

George ends his post by appealing to his readers to sue the Fed. I don't think think a lawsuit will bring much justice. If there are to be any legal battles to be fought, better to petition Congress to adjust the wording of the Federal Reserve Act so that it better fits the spirit of the law. We don't want the law to misidentify a situation involving IOR in excess of the "general level of interest rates" as necessarily implying subsidization when microstructure is actually at fault. While Milton Friedman had a lot of reasons to criticize the Fed, this probably wouldn't be one of them.
Posted by JP Koning at 4:10 PM