The shares of the Swiss National Bank (SNB), Switzerland's central bank, have almost doubled since July, despite there being no real news. Yep, you read that right, the SNB is listed on the stock market. There are four other central banks with listed shares: Belgium, Japan, Greece, and South Africa. I discussed this odd group back in 2013.

Why are SNB shares catapulting higher? This is a staid central bank, after all, not a penny stock.

Let's look at the fine print. Swiss National Bank shares aren't regular shares. To begin with, the dividend is capped at 6% of the company's share capital. The SNB was originally capitalized back in 1907 with 25 million Swiss francs, an amount that hasn't changed in 109 years. Which means that the dividend is, and always has been, limited in aggregate to a minuscule 1.5 million francs per year (about US$1.5 million). Because this amount must be divvied among the 100,000 shares, each share gets just 15 francs per year.

The SNB has faithfully paid this 15 franc dividend since its founding (apart from 2013, when it was omitted due to massive capital loss on its gold holdings). For instance, here it is paying the dividend throughout the 1980s: 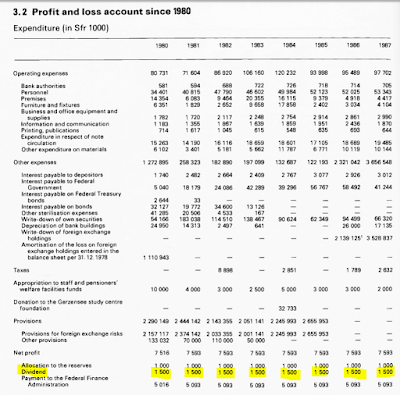 Once the 1.5 million franc dividend is paid, Swiss law dictates that all remaining profits get sent to the Swiss central government and the cantonal governments. It further stipulates that if the SNB is to be liquidated, shareholders will only receive a cash payment equal to the nominal value of their shares. This means that if shares are trading for 1025 Fr, but there is residual firm value (after paying debtors) of 10,000 francs per share, well too bad—shareholders only get 1025 Fr.

Given these peculiar details, an SNB share isn't really equity; it's best thought of as a perpetual government bond with a 6% coupon, sometimes known as a consol. It throws off 15 francs per year for the rest of time. With the SNB as issuer, these securities are pretty much risk-free.

The math behind SNB shares is straightforward. Just use the Finance 101 formula for a perpetual bond, PV=c/r, or present value (PV) equals yearly cash flow (c) divided by yield (r). With annual interest payments of 15 francs and SNB shares trading at 2000 Fr, the yield comes out to 0.75%.

Here's what I think explains the rise in SNB shares. In July, an odd thing happened. The yield on the Swiss 50-year bond, the closest instrument in Switzerland to a perpetual government bond, fell below 0%. SNB shares (i.e. perpetual bonds) were themselves trading at around 1000 francs at that point for a yield of 1.5%. A few large investors probably began to ask themselves: Why the devil are we accepting a negative nominal return on our ultra long-term government bond portfolio if these other government bonds, which happen to be issued by the central bank and masquerade as shares, still have a positive yield? And so they started to buy SNB shares in quantity, driving the price up and the yield down.

This sort of thinking explains why SNB shares have risen, but not necessarily the explosive nature of the move. The shares haven't just risen by a few bucks, after all. They've almost doubled!

In the table below, I've illustrated the relative dynamic of a 50-year bond and a perpetual as rates fall to zero.


At the limit of 0%, SNB shares will have an infinite price. If all existing and yet-to-be-issued government fixed term bonds are guaranteed to lose money over the course of their existence, but there exists a government security that is guaranteed to perpetually offer a positive cash flow, then an investor will pay *any* amount of money to own those cash flows. There is no price to which SNB perpetual bond can rise that chokes off their demand.

The behavior of perpetual bonds at low interest rates *might* explain why SNB shares have gone hyperbolic. It also means that if Swiss rates continue to fall, the shares could have another double or two in the tank. So much for staid Swiss central banking.


Hat tip to Leon Oudejans for alerting me to the recent rise in SNB shares.

P.S. Does anyone know how rare perpetuals are, specifically perpetuals like SNB shares that don't provide the issuer with the option to call it? My understanding is that this sort of security just isn't issued anymore, at least not since British consols.

What the difference between an SNB share and a 1000 Swiss banknote? Not much, right? They're both perpetual bonds, one paying 15 francs a year, the other paying zero francs per year. If you were to write the number 1000 on an SNB bearer share, and 500 on a half share, and 100 on a fifth share, etc you'd have the entire series of Swiss banknotes. Cut the dividend on shares to zero, and won't banknotes and shares be exactly the same?

Here's a chart of the Bank of Japan, which is also a perpetual bond underneath the hood.
Posted by JP Koning at 12:40 AM