This continues a series of posts (1, 2, 3) I've been writing that tries to improve on Indian PM Narendra Modi's clumsy demonetization, or what I prefer to call a policy of surprise note swaps.

The main goal of Modi's demonetization (i.e. note swapping) is to attack holdings of so-called "black money," or unaccounted cash. The problem here is that to have a genuine long-run effect on the behavior of illicit cash users, a policy of demonetization needs to be more than a one-off game. It needs to be a repeatable one. A credible threat of a repeat swap a few months down the road ensures that stocks of licit money don't get rebuilt after the most recent swap. If that threat isn't credible, then people will simply go back to old patterns of cash usage.

It's worth pointing out that the idea of behind demonetization precedes Modi by many decades. In a 1976 article entitled Calling in the Big Bills and a 1980 a follow-up How to Make the Mob Miserable, James S. Henry, who is on Twitter, described what he called "surprise currency recalls."

In 1976, @submergingmkt wrote the original call for an aggressive demonetization: https://t.co/tDro2hnvAZ Does he approve of Modi's effort? pic.twitter.com/wM2EzLjkWB
— JP Koning (@jp_koning) January 10, 2017


Specifically, Henry advocated a sudden cancellation and reissuance of all US$50 and $100 notes as a way to hurt "tax cheats, Mafiosi, and other pillars of the criminal community." Rather than a one-shot action, which would only annoy criminals, the idea was that "the recalls could be repeated, at random, every few years or so, raising the 'transaction costs' of doing illegal business."

In order to credibly threaten a series of repeat note swaps, I'd argue that the quantity of notes recalled in each demonetization must be small. Small batches of notes can be quickly cancelled and replaced without disturbing people's lives. This keeps the economic and political costs of withdrawing demonetized cash (lineups, cash shortages, etc) manageable. If these costs are too high, the threat of repeats isn't credible.

Instead of going small, Narendra Modi decided to go big by having the Reserve Bank of India demonetize both of India's highest value banknotes, the ₹500 and ₹1000 note, which together comprised some 86% of India's cash. This has caused all sorts of problems. For instance, almost four months after the November 8 announcement the amount of cash in circulation is still far below the required levels of ₹17-19 trillion, the RBI unable to run its printing presses fast enough to keep up. The RBI's inability to fill the vacuum left by demonetized notes has been ably explained by James Wilson and is illustrated in the chart below: 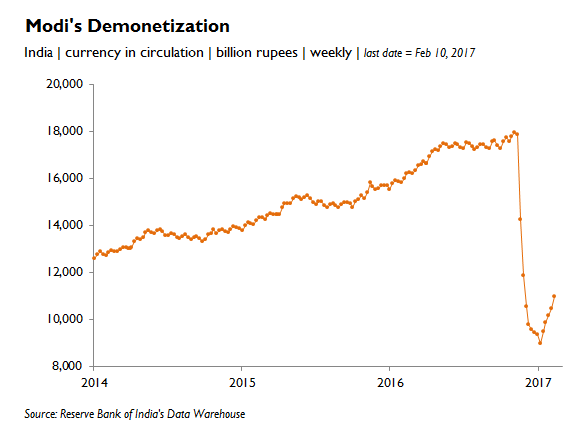 Because of the enormous disruption it has caused, Modi's massive demonetization departs from Henry's script—it cannot be repeated, not for decades (a point that Russell A. Green makes here as well). Were Modi to begin discussing another demonetization, say for 2018, Indians would probably rise up in anger at the possibility of more lineups, empty ATMs, and hurdles to making basic purchases. Which means that post-Modi demonetization, it's entirely safe for India's illicit users of cash to wade back into the waters. If cash usage patterns return to normal, it seems to me that the entire demonetization project was an exercise in futility.

In India's case, demonetizing entire note denominations is too powerful a tool to ensure repeatability. Even if Modi had demonetized the ₹1000 note and not the ₹500, for instance, the exercise would still have involved some 30-40% of the nation's cash supply. This would have been an arduous affair for all involved, certainly not one that could be repeated for many years.

Weeding out rupee banknotes according to serial number rather than denomination would have allowed for a more refined policy along the lines advocated by Henry. Here's how it would work. The government begins by declaring that all ₹1000 notes ending with the number 9 are henceforth illegal. Anyone owning an offending note can bring it to a bank to be swapped for a legitimate ₹1000 note (one that doesn't end in 9). However, the government sets a limit on the number of demonetized notes that can be exchanged directly for legitimate notes, say no more than three. Anything above that can only be exchanged in person at a bank teller for deposits, which requires that they have an account (i.e. their anonymity will be lifted). Once an individual has deposited five notes in their account, all subsequent deposits of demonetized notes would require a good explanation for the notes' provenance. Should the requisite paper trail be missing, the depositor gives up the entire amount.

The process begins anew a few months hence, the specific timing and banknote target being randomly chosen. So maybe thirteen months after the first swap, the government demonetizes all ₹500 notes ending in 6. Randomness prevents people from anticipating the move and hiding their illicit wealth in a different high denomination note.

Too understand how this affects black money owners, consider someone who owns a large quantity of illicit ₹1000 banknotes, say ₹70 million (US$1 million, or 70,000 banknotes). This person faces the threat of losing 10% to the note swap. After all, when the 9s are called, odds are that he or she will have around 7,000 of them, of which only eight can be returned without requiring a paper trail. The owner can simply accept a continuing string of 10% losses each year as a cost of doing business.

Alternatively, they might protect themselves ahead of time by converting their hoard into a competing store of value, say gold, bitcoin or low denomination rupee notes like ₹100s (which are not subject to the policy of ongoing swaps). If they flee high denomination notes to avoid subsequent demonetizations, illicit cash users in a worse position than before the adoption of the policy of note swapping. Gold and small denomination notes have far higher storage and handling costs than ₹1000 banknote. And unlike gold and bitcoin, a banknote is both supremely liquid and stable. So even if large-scale owners of banknotes manage to avoid painful note swaps, they still endure higher costs.

As for licit users of high denomination notes, the fact that the 10% clawback would not apply to them means they needn't change their behavior. Nor would the poor--who are unlikely to be able to provide a paper trail--have to worry about the policy. Demonetizations would only occur in high denominations, in India's case ₹500 and 1000s, and the poor are less likely to own these in quantities above the three note limit.

Incidentally, readers may recognize a policy of repeat demonetizations as akin to a Gesell stamp tax, named after Silvio Gesell, who in 1916 proposed the idea of taxing currency holdings in order to increase the velocity of circulation. Greg Mankiw famously updated Gesell's idea during the 2008 credit crisis to remove the zero lower bound. He did so by using serial numbers as the device for imposing a negative return rather than stamps. This post updates Mankiw's idea, except rather than applying the tax to all cash it strikes only at illicit cash holdings, and does so in the name of an entirely different policy goal—attacking the underground economy, not removal of the zero lower bound.

A series of small serial number-based swaps seems like a better policy than Modi's ham-handed demonetization of all ₹1000 and ₹500s. It would certainly do a better job of promoting a long-term decline in undocumented cash holdings and would do so by imposing a much smaller blast radius on the Indian public. There would be no currency shortages, huge lineups at banks, empty ATMs, or trades going unconsummated due to lack of paper money.

That being said, while superior to Modi's shock & awe approach, a policy of repeat note swaps certainly has its flaws. In principle, the idea of surprising citizens every few months—i.e. forcing them to keep on guessing—does not seem entirely consistent with the rule of law. Another problem is that once the policy has been ongoing for several years, the list of demonetized serial numbers will be quite long. The process of buying stuff with notes will become evermore difficult given the necessity that the merchant consult this list prior to each deal to ensure that bad notes aren't being fobbed off. Finally, commenting recently on Henry's plan, Ken Rogoff notes that "there is a fine line between a snap currency exchange and a debt default, especially for a highly developed economy in peacetime." Since debt defaults hurt a countries credit standing, serial demonetizations might lead the investment community to be more leery about the nation's other liabilities, say its bonds.
Posted by JP Koning at 9:08 PM