Why the American taxpayer might prefer a large Fed balance sheet

David Andolfatto and Larry White have been having an interesting debate on the public finance case for having a large (or small) Federal Reserve balance sheet. In this post I'll make the case that American taxpayers are better off having a large Fed balance sheet, perhaps not as big as it is now, but certainly larger than in 2008.

To explain why, we're going to have to go into more detail on some central banky stuff.


There's a problem with the above chart. It shows reserves clocking in at just $10 billion prior to 2008, but it's important to keep in mind that this *understates* the quantity of reserves issued by the Fed. Prior to 2008, the Fed would typically lend out tens of billions worth of reserves to banks during the course of the day, these amounts being paid back before evening. These loans are referred to as "daylight overdrafts." Because the above chart uses end-of-day data, it omits daylight overdrafts, thus making the balance sheet look smaller than it actually was.

How big did the Fed's balance sheet actually get during the course of a day thanks to overdrafts? Prior to the 2008 credit crisis, daylight overdrafts typically peaked at around $150 billion. So if we recreate the chart using intraday Fed data, the pre-2008 balance sheet would be around $800 billion + $150 billion, or 20% larger than if we use end-of-day data. And rather than a relatively flat pattern, we see a pulsing pattern. I've drawn out the chart by hand to give a sense for how the balance sheet would have looked, although its not to scale and doesn't use real data. 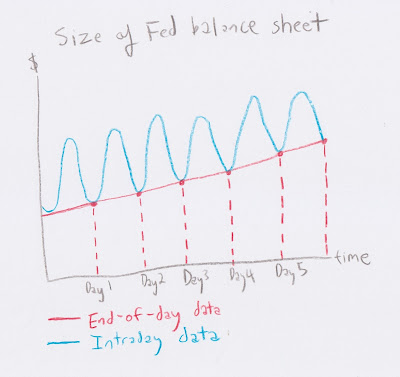 So why does the Fed offer daylight overdrafts? One of the business lines in which a commercial bank participates is the processing of payments on behalf of its clients to other banks, these recipient banks in turn crediting sent funds to their clients. To make these interbank payments, banks use deposit accounts at the central bank, or reserves.

In the U.S., legally-stipulated reserve requirements force banks to hold small quantities of central bank reserves overnight. So when the U.S. banking system opens in the morning for business, a bank will typically already have some funds in their reserve accounts that can be used to make client payments. However, the ability of this small layer of required reserves to carry out the nation's payments will soon be swamped—after all, the quantity of transactions conducted on a single day using reserves is massive, currently clocking in at $3 trillion.

In theory, banks might choose to hold an excess quantity of reserves overnight (i.e. more than the legally mandated minimum) in preparation for the next day's payment cycle. However, the Fed has historically kept the overnight interest rate on reserves at 0%, far below the market overnight interest rate. So no bank wants to hold reserve overnight if they can avoid it. If they did, their profits would suffer.

To ensure that banks have the ability to carry out the nation's business come morning, the Fed has typically provided the necessary reserves via daylight overdrafts. When the banks close for business in the evening, the Fed then sucks the reserves it has lent to banks back in. Alex Tabarrok once fittingly described banks as inhaling credit during the day, "puffing up like a bullfrog" —only to exhale at night.

As I mentioned earlier, before the credit crisis hit Fed-granted daylight overdrafts used to rise as high as $150 billion over the course of the day. Since 2008, the quantity of daylight overdrafts has declined quite dramatically. See the chart below:


Why have banks stopped applying for overdrafts? In 2008 the Fed began to pay interest to any bank that held reserves overnight. Rather than "exhaling at night," it suddenly made sense for banks to hold reserves till the next morning. This new demand for overnight balances was not met by daylight overdrafts, which must be paid back by the end of the day. Rather, a new permanent supply of reserves began to emerge thanks to the Fed's policy of quantitative easing. Under QE, the Fed created reserves and spent them to purchase bonds, these reserves staying outstanding as long as the Fed did not repurchase them, potentially for decades. The upshot is that banks are now quite happy to hold huge amounts of Fed-issued reserves on a permanent basis. As such, they no longer need to make use of daylight overdrafts to carry out the nation's payments.

So let's bring the conversation back to the taxpayer. As you should hopefully see by now, the debate between keeping a big balance sheet and returning to its pre-2008 size is closely intertwined with the following question: do we want our central bank to provide daylight overdrafts or not? Because if we are to go back to 2008—i.e. to a period when overnight reserves were "scarce," as Larry White describes it—then by definition we are advocating daylight overdrafts.

I'd argue that taxpayers might prefer that the Fed not provide daylight overdrafts. To begin with there is the question of credit risk. If a bank that has been granted an overdraft were to fail during the course of business, the Fed would be out of pocket. Since the central bank is ultimately owned by the taxpayer, that means taxpayers could take a big hit when a bank fails.

The Fed could protect itself by requiring banks provide collateral as security for access to Fed overdrafts. Now when the offending bank goes under, the Fed has a compensatory asset in its possession that it can use to make good on the loan, thus sparing the taxpayer. However, the protection afforded the Fed by collateralized daylight overdrafts comes at the expense of the nation's deposit insurance scheme, the Federal Deposit Insurance Corporation, or FDIC. To ensure that depositors of a failed bank are made whole, FDIC typically sells off the bank's assets. If the Fed has taken one of those assets for itself as collateral for a daylight overdraft, FDIC will have one less bank asset at its disposal and may have to dip into taxpayer funds to make up the difference. The overall risk faced by the taxpayer has not been reduced.

By maintaining the status quo—i.e. a large quantity of reserves—the taxpayer gets more protection from bank failures. Banks must buy reserves, or tokens, ahead of time to ensure that they can meet the payments needs of their clients. So the Fed acts as a seller, not a creditor, and therefore does not expose taxpayers to risk of bank failures. At the same time, FDIC does not face the prospect of having risk shifted onto it should the Fed seize collateral from a failed bank with unpaid daylight overdrafts.

Now the preceding discussion might seem to tilt me towards David Andolfatto's position of keeping a large balance sheet, albeit for different reasons than him. Not entirely. While a large quantity of reserves will be sufficient to insulate the taxpayer from bank failures, it needn't be as large as the current $2.5 trillion in outstanding reserves. As I pointed out earlier, prior to the 2008 credit crisis the Fed would typically grant around $150 billion in daylight overdrafts. This was sufficient to facilitate ~$2.7 trillion in payments (see data here). So each dollar in reserves was able to support 18x that value in payments. The Fed currently processes around $3.1 trillion in payments, a task that could probably be discharged with ~$200 billion in daylight overdrafts, assuming that the 18x ratio still prevails. So as long as the Fed were to keep at least $200 billion of the $2.5 trillion in reserves outstanding, that amount should be sufficient to replace the need for daylight overdrafts.

1. How the High Level of Reserves Benefits the Payment System and Settlement Liquidity and Monetary Policy Implementation, both by Bech, Martin, and McAndrews
2. Divorcing Money from Monetary Policy by Keister, McAndrews and Martin
3. Turnover in Fedwire Funds Has Dropped Considerably since the Crisis, but It’s Okay by Garratt, McAndrews, and Martin
Posted by JP Koning at 12:29 AM