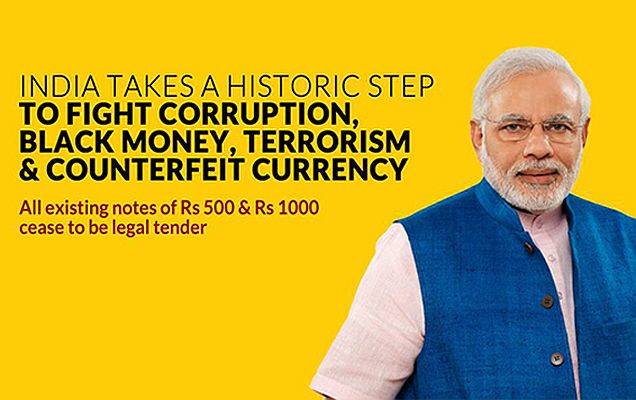 One of the world's most notorious cases of counterfeiting was the 1925 Portuguese banknote crisis, when Artur Virgilio Alves Reis managed to pass off 200,000 fake five-hundred escudo notes, worth around £56 million in 2016 terms. When the Bank of Portugal discovered the counterfeits in December 1925, it announced an aggressive demonetization of the five-hundred escudo note, giving citizens just twenty days to bring in old notes for redemption. By then, the damage had been done. Reis had managed to increase Portugal's supply of banknotes by 5.9%, spending the equivalent of 0.88% of Portugal's nominal GDP into circulation! (More here.)

An aggressive note demonetization in the face of large-scale counterfeiting is a thoroughly justified response as it immediately puts a halt to the problem. In this context, it's worth revisiting the world's most recent attempt to combat counterfeiting with an aggressive demonetization—India PM Narendra Modi's forced recall of the Rs1000 and 500 notes on November 9, 2016, some 290 days ago. How does it compare to Portugal in 1925?

If we go back to Modi's initial speech, India's demonetization was targeted at the three "festering sores" of corruption, black money, and terrorism. On the latter, Modi said:


Terrorism is a frightening threat. So many have lost their lives because of it. But have you ever thought about how these terrorists get their money? Enemies from across the border run their operations using fake currency notes. This has been going on for years. Many times, those using fake 500 and 1,000 rupee notes have been caught and many such notes have been seized.


Given Modi's fighting words, we'd expect the demonetization to have caught quite a bit of bad currency. Last month, finance minister Arun Jaitley revealed how many counterfeit notes had been detected:


Translating Rs11.23 crore into dollar terms, the monetary authorities have found just US$1.7 million worth of counterfeit notes. Step back for a moment and compare $1.7 million to the full breadth and width of the demonetization. In declaring that all Rs1000 and 500 notes were to be useless, Modi  demonetized US$240 billion worth of paper rupees, around 85% of India's stock of banknotes. So only 0.001% of the entire face value that has been brought in for conversion was fake! That's an incredibly low value of counterfeits, especially when you consider that in 1925, Reis's counterfeits accounted for around 5% of the entire Portuguese paper money supply.

Central bankers usually measure counterfeiting in parts per million, or PPM, the number of fakes detected in one year for every one million genuine notes in circulation. I've inserted a chart below, which comes from this Reserve Bank of Australia document. Canada, for instance, once had a much higher PPM (it even hit 450 back in 2004), but the Bank of Canada managed to bring this down to the low double digits by introducing new security features and, later, polymer notes. 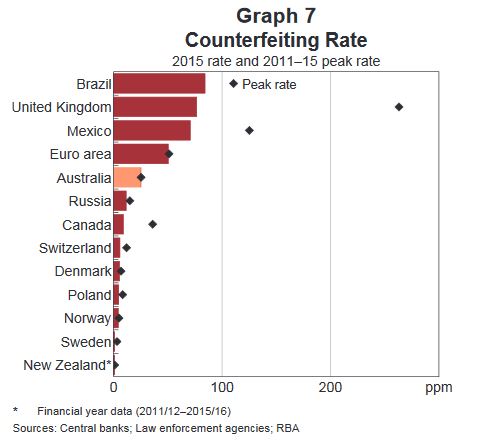 Australia, the first nation to introduce polymer notes in the early 1990s, used to boast one of the lowest incidences of counterfeiting (below 5 PPM). Criminals are finally starting to make polymer fakes, perhaps because the RBA hasn't bothered to update the series for over two decades, giving plenty of time for counterfeiters to catch up.

In India's case, the recent numbers show a total of 158,000 fake notes detected (out of a 24 billion banknotes demonetized) between November 8, 2016 and July 14, 2017, this totaling up to a minuscule 6.6 PPM—in the same range of countries like Canada or Australia. And certainly not in the same category as Portugal in 1925.

Nor is this data anomalous. Back in January, James Wilson—an Indian civil engineer-turned-demonetization expert—perused official banknote statistics only to find that over the last few years India has not had a high incidence of counterfeit rupees, leading him to describe the demonetization effort as a cannon shooting at sparrows. Using some of the data from James' post, it's possible to calculate that India had a PPM of 7.1 in 2015/16. (I get this from 90.266 billion units of currency in circulation, and 632,926 counterfeits detected that year). This is consistent with earlier data from the Reserve Bank of India showing a PPM from 2007-2012 ranging between 4.4 to 8.1. So India's rate of counterfeits detected is fairly reasonable relative to other countries.

This low PPM could be due to two factors. Either India doesn't have a counterfeiting problem, or it does have one but the authorities are just really bad at detecting counterfeits. If neither Indian banks nor its central bank are particularly good at identifying fake notes, then a large stock of unidentified fakes may be permanently circulating along with legitimate banknotes with no one capable of draining out the fakes. But even so, why instigate a massive note recall to catch counterfeits if the institutions that do the catching are so leaky to start with? If it is the case that India has a counterfeiting problem, then Modi's go-to fixes should have been to improve note security features and the banking system's ability to detect fakes, not implement a massive Portuguese-style recall.

So the data certainly destroys one of the pillars on which Modi's demonetization was based; terrorism and fake currency. You need something like a Portugal in 1925 to justify an aggressive demonetization, and India wasn't even close. Over the next few months more data will pour in, expect Modi's scheme to be further tested.

P.S. The title is cribbed from here: