Post-demonetization, the role of cash has been diminished 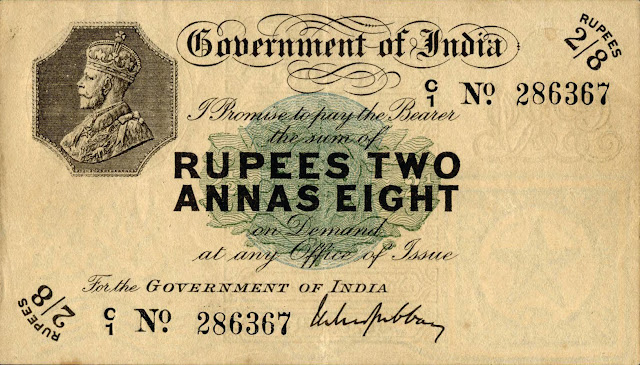 Narendra Modi's demonetization scheme, which involved the sudden cancellation of all ₹1000 and ₹500 rupee notes, was designed to hurt those in the underground economy who had stashed away large amounts of cash. But many smaller cash users got caught up in the blast radius. Has Indian behaviour surrounding cash changed? More specifically, what long-term impact has the painful demonetization process had, if any, on the population's preferences for holding cash?

Luckily for us, we have a great data set for evaluating this question: the supply of currency in circulation. If the propensity of Indians to hoard notes has changed, we'd expect to see a long-term reduction in currency outstanding relative to trend.

Before we take a look at the data, I want to make one point on the economics of paper money. The old phrase "cranking up the printing presses" is a bad one because it implies that central bankers play an active role in deciding the quantity of paper money in the economy—they don't, their role is purely passive. At any point in time the stock of paper money in circulation has been determined by the decisions of the public. If people feel they need more notes, they'll go to their bank and withdraw them, the bank in turn submitting a request to the central bank to provide more. The job of a central bank is a simple one: react to the public's desire by printing new notes, or—in the case of a decline in demand for paper currency—withdrawing them.

While the stock of notes is always a reflection of people's preferences, there are a few exceptions. If there is a sudden spike in the demand for banknotes, and the central bank's printers can't keep pace, the public's desire for more paper will be temporarily frustrated.

This frustration is exactly what occurred in India in the months after demonetization. A whopping 85% of the nation's notes were suddenly cancelled. Indians needed to get their hands on replacement notes in order to move back to their preferred holdings of cash, but the RBI didn't have the printing capacity to meet this demand. Lineups at banks and ATMs grew, and withdrawal limits were imposed, a sure indication that the quantity of paper rupees in circulation was not consistent with Indian's preferences.

With 315 days having passed since demonetization was announced, has the RBI finally caught up to the public's desired stock of cash? I'd argue that it has. If we go back to this post by James Wilson, he calculates that—given various assumptions about the number of presses brought on line and shifts per day—all demonetized ₹500 would be replaced by as early as mid-June and late as mid-September 2017. We have now passed the later of the two dates.

The second reason that I think the RBI has caught up to Indians' demand for cash is the return of the same sawtooth pattern in the weekly currency-in-circulation data that characterized the pre-demonetization period. See below: 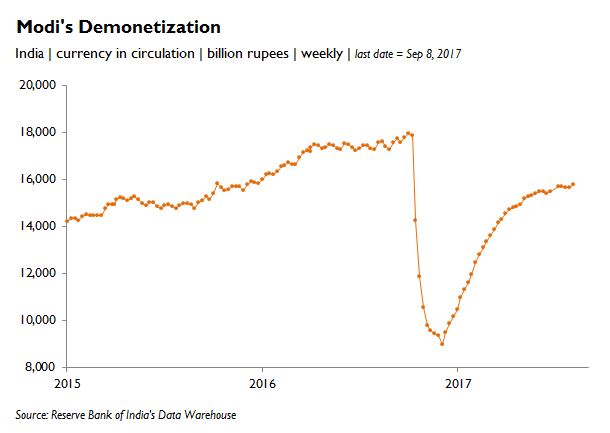 While currency in circulation consistently grew from mid-December 2016 onward, consistent with a dearth of paper money, it finally had its first week-to-week drawdown in July 2017, followed by several since then. The Indian public would only have returned currency to their banks if their collective demand for currency was finally satiated. If there was still a structural deficiency in the supply of notes, they would have kept these notes in their wallets rather than bringing them in.

The point of all this is to show that current data on the stock of rupees represents the true preferences of Indians, not RBI printing constraints. So let's take a closer look at the data itself. Prior to demonetization, India's currency supply had been consistently growing at around 15% a year, as represented by the black trendline below. In September 2016, just two months before demonetization, Indians had collectively chosen to hold ₹17.5 trillion in cash (around US$272 billion). 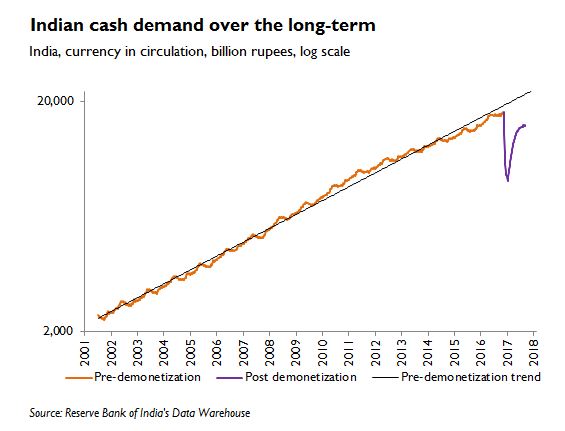 If there has been no change in cash-holding behaviour then the pre-demonetization growth path of 15% should still be in effect. If so, from a post-demonetization low Indians would have rebuilt their cash holdings to a trend amount of ₹20 trillion today. Instead, currency in circulation clocks in at just ₹15.8 trillion, around ₹4.2 trillion (or US$65 billion) less then the counterfactual.

So demonetization has certainly modified the cash-using behaviour of Indians. Their fingers burned, they have decided to hold just 75% of what they would otherwise have in their wallets had demonetization never occurred. It remains to be seen if this is a one-time change in the level of currency in circulation or whether the 15% growth rate itself will be permanently modified. In other words, from this point on growth in cash can either continue to grow 15% from a lower base of ₹15.8 trillion, or a new rate of growth might emerge, say 5-10%. Demonetization will have been a more effective cudgel if it succeeded in changing the actual rate of growth, not just the level.

One wonders what filled the ₹4.2 trillion void. Has the cash-using public decided to hold a larger stock of state-sanctioned digital money (i.e. mobile money balances and bank accounts) or have they simply chosen to swap one form of anonymous "black money" for another (i.e. cash for gold, diamonds, real estate)? I've gathered some data showing that at least some of the gap is being filled by the former. 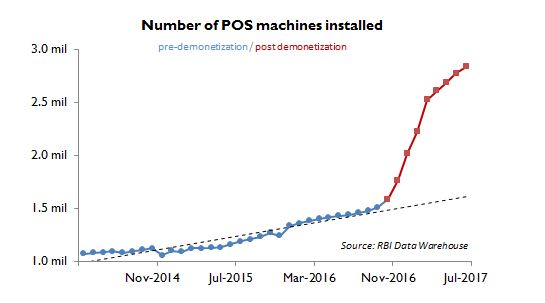 The above chart shows that the number of point-of-sale (POS) terminals installed has experienced a one-time shot to the arm after last fall's demonetization announcement. 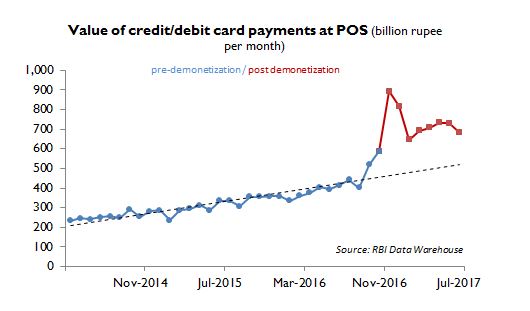 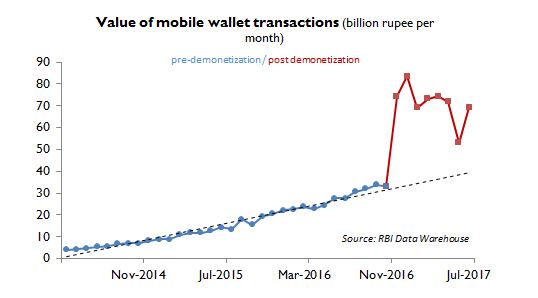 The other two charts show that the value of POS transactions using debit and credit cards moved to a new and higher plateau, as did mobile wallet payments (like Paytm). It is notable that transactions using these methods are not returning to their previous levels (although this is from a relatively small base) indicating that these payments options weren't mere fill-ins during the cash shortage period, but have enjoyed a permanent increase in adoption. Given that these new forms of digital payment are doing much more "work" as media of exchange, it probably makes sense to assume that they have captured at least some of the substitution out of cash.

So demonetization has certainly changed Indians' attitudes to cash. They like the stuff a bit less than before and are holding fewer bills in their wallets. This change might seem like an inevitable one, but at the time demonetization was announced it was by no means certain that it would have any effect whatsoever on tastes for paper money. Whether these effects justify the whole affair is a much more complex question.


P.S. You can also tell a story in which demonetization caused a depression in India's informal economy, and since economic activity in this sector plunged people had less demand for notes. So contrary to everything I wrote above, a one time change in preferences for alternative forms of money over cash didn't occur--people simply need less of the stuff because there are fewer transactions to be made. I don't doubt that demonetization hurt the informal economy, but I am skeptical that it would have led to a 25% reduction in cash usage. I think the changing-of-tastes story explains the data better.
Posted by JP Koning at 11:17 AM