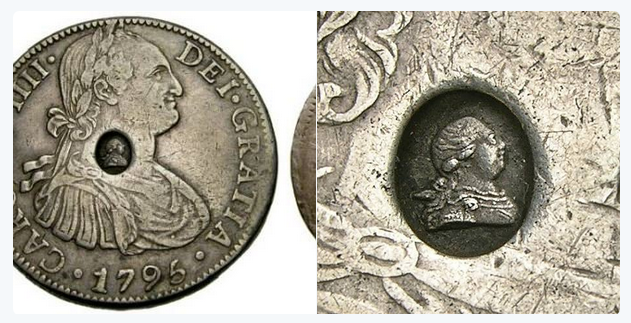 That's how Londoners described the strange silver coin pictured above, which first appeared in Britain in 1797. Due to worries that Napoleon was about to invade the British Isles, a run had developed on the Bank of England. In response, Parliament allowed the Bank to refuse to redeem its notes with gold coins, but this had only resulted in an inconvenient shortage of coins.

To remedy the shortage, the Bank of England decided to open its vault and put its hoard of silver coins into circulation. Complicating matters was the fact that these coins were not native shillings or pennies, but Spanish dollars, otherwise known as eight real pieces. As such, they had to be re-purposed into local currency. The Bank of England accomplished this task by stamping the head of King George III—the fool—on the neck of Charles IV of Spain—the ass—who occupied the obverse side of that era's version of the Spanish dollar. The Bank then declared that all stamped Spanish dollars were to be worth four shillings and nine pence. People flocked to the Bank of England's window to get their hands on the new coins.

That the Spanish dollar temporarily became part of England's circulating media of exchange was due to its ubiquity—in its heyday the Spanish dollar, like today's U.S. dollar, was everywhere. After discovering huge amounts of silver in the new world, the Spaniards had set up a mint in Mexico City in 1536 to produce large quantities of silver coins. Mints in Potosi (Bolivia), Lima (Peru), and elsewhere soon followed. It is estimated that some four-fifths of the world's silver produced between 1493 and 1850 came from Spanish America, almost all of it in the form of Spanish dollars!

Although their design changed over the centuries, by the 1700s the Spanish dollar—easily identified by the two "pillars of Hercules" on the reverse side of the coin—had become known and accepted all over the world. As the map above shows, the two pillars refer to the Rock of Gibraltar in Spain and its counterpart on the Moroccan side of the narrow strait separating Africa from Europe.

In addition to England, the Spanish dollar shows up in the Caribbean islands where it made up a major part of the local coinage. To provide small change, locals cut dollars up into pieces. Below, an 1806 dollar used in Guadeloupe has had its centre carved out of it and stamped with the letter "G". Earmarking of coins was done to prevent exportation and restrict usage within borders. In this way, local currencies were literally piggybacked into existence off of the ubiquitous Spanish dollar.


In the next image, a Trinidadian version of the dollar has been carved up like a pizza. The half piece has been countermarked with a "6", the third with a "4", and the sixth with a "2". These numbers refer to the number of bits or bitts the piece was worth, the bit being a local accounting unit. By marking the letters "TR" on each dollar to indicate Trinidad, the Spanish dollar has been forked to create a second currency.


All possible methods of cutting up Spanish dollars were used. Here's a 1797 dollar from Saint Lucia that has been cut up lengthwise, like a loaf of bread, with "SLucie" being countermarked on each section.


The Spanish dollar also made a notable appearance on the opposite side of the globe. In 1813, the colony of Australia minted its first currency, the so-called holey dollar. To deal with a shortage of coins, the governor of New South Wales imported thousands of Spanish dollars. A convicted forger was contracted to cut the centre from each one, countermarking each of the resulting pieces with the name of the colony and its nominal value in shillings and pence. As in the case of the Caribbean Islands, this mutilation of the dollar was an attempt to render them useless outside of the colony. The outer ring was rated at five shillings and the centre—the dump—at fifteen pence, or one shilling and three pence.


The Spanish dollar, which would become the Mexican dollar after Mexico won its independence from Spain, was also popular in China. Merchants and professional money exchangers, or shroffs, would test a coin to verify its silver content. According to James Gullberg, they went about this by balancing the coin on their finger and tapping it. If it rang, it was legitimate. The theory goes that once the coin had passed their purity test, a shroff would stamp that coin with his own peculiar chopmark—a Chinese character, an emblem, symbol, or a pseudo character. (I discussed this practice in more depth here). The more chops a Spanish dollar had, the better its quality—even after it had been chopped beyond recognition.


Pictured above is a chopped Spanish dollar from 1807. According to Gullberg, Chinese merchants preferred the Carolus IIII dollar, which was issued between 1772-1810. They referred to it as four work, the IIII resembling the Chinese character for going to work. The influence of the Spanish/Mexican dollar continued even into the 19th century: the banknote below, issued in 1912 by the Sino-Belgian Bank, is redeemable in Mexican dollars.


Moving back west, the Spanish/Mexican dollar had a key role to play in the North American economy up to the mid-1800s. In both Canada and the U.S., the unit of account function of money was separated from the medium of exchange function. Early colonists kept prices in pounds, shillings, and pence unit of account, but Spanish dollars and their subdivisions were used to transact business. Because of the long distance from England, there simply weren't enough shillings and pennies to make do.

Even though a local U.S. dollar coin—which was modeled off of the Spanish dollar—had been minted as early as 1794, the Spanish version remained by far the most popular form of coinage in the U.S. The presence of the Spanish dollar was even enshrined in American law, the coins having been declared legal tender in 1793. Many people have even speculated that the famous dollar sign, $, has been bastardized from the symbol for peso.

To illustrate the ubiquity of the Spanish dollar in the U.S., below I've included a 6¼ cent note issued in 1816 by Easton and Wilkesbarre Turnpike Company, which built and operated private toll roads. This odd denomination only makes sense if you consider it in the same context as the Spanish dollar. Unlike U.S. dollars, which were divisible by 100 into cents, the Spanish dollar was divisible into 8 reals. A one-real coin, a fairly common unit around that time, would have been worth 12½ cents, and a ½ real coin worth 6¼ cents. So while the turnpike company's decision to issue a 6¼ cent note might seem odd to us today, it was probably meant as a convenience to its users, who would have been more familiar with Spanish coins than any other type of coin.


As for Canada, below is an 1819 $5 bill from the Bank of Upper Canada. To help customers who couldn't read, the bank conveniently printed an image of five Spanish dollars at the bottom of the note.


For a number of reasons, the Mexican dollar was eventually killed off . The U.S. had originally been on a bimetallic standard, but in 1834 the authorities changed the silver-to-gold ratio to 16:1 from 15:1, in the process slightly overvaluing gold. The discover of the yellow metal in California only further pressured the price of gold down relative to silver, exacerbating the legally-imposed undervaluation of silver. As a result, silver coins began to disappear. After all, anyone who had a stash of silver coins would have found it more profitable to melt them down and export them overseas where they traded at their true economic value. The U.S. had effectively flipped onto a gold standard. To compound matters, Spanish dollars lost legal tender status in 1856, which would have further crimped their demand.

As for Asia, several competing coins were created, including the Japanese yen, a near-replica of the Mexican dollar. The U.S. began to produce special trade dollars that were to be used solely in Asian trade (I wrote about the trade dollar here). Further reducing the demand for Mexican silver was the decision by many nations to follow the major western nations and officially adopt gold standards, including Japan in 1897 and the Philippines in 1904.

Even though it was eventually eclipsed, there are still modern day echoes of the old Spanish dollar. The pejorative term two bit is still used in the U.S. as a synonym for cheap or insignificant, as in two-bit thief. One bit was ⅛ of a dollar, or 12.5¢, and two-bits 25¢, so a two-bit thief is a 25¢ thief. Amazingly, the practice of pricing in sixteenths continued on the New York Stock Exchange up till 2001. The Toronto Stock Exchange decimalized in 1996.

Up here in Canada, Quebecers use the word piasse for dollar. I had always assumed that they meant piece, but I recently discovered that the wording actually goes back centuries to piastre, the French word for the Spanish peso. Even more interesting is the vernacular usage of trente-sous (or 30 sous) to mean 25-cents, which I only understood after reading this from Frédéric Farid.


The story goes like this. In the 18th and 19th Centuries, an English halfpenny was referred to in the colony of Lower Canada (i.e. Quebec) as a sou. The pound-shilling-pence unit of account (£/s/d) was still in use at the time but Spanish dollars were the most common coin in circulation in both Upper and Lower Canada. Dollars were officially rated by the British authorities at $4 for each £1. A quarter Spanish dollar (a two-real coin or 25 cent piece) would therefore be worth £0.0625.

Since an English pound contained 240 pence, that meant a quarter Spanish dollar was worth 15 English pennies, or 30 half-pennies. And given that Quebecers referred to half-pennies as sous, that gave rise to the ongoing practice of referring to 25 cents as 30 sous. When they use this term today, Quebecers are just referring to the archaic exchange rate between Spanish dollars and pence.

To end things off, you can also see a ghost of the old Spanish dollar in Venezuela's 12½ centimos coin. This coin is an eight of a bolivar—reckoning in terms of eights and sixteenths is a hallmark of the days of the old pillar coin.

Given Venezuela's ongoing hyperinflation, the likely destiny of the 12½ centimos coin is to be nothing more than another two-bit dead coin.


Sources:
George Selgin, Good Money
A. Piatt Andrew, The End of the Mexican Dollar (link)
J.B. Caldecott. The Spanish Dollar as Adapted for Currency in Our West Indian Colonies (link)
Posted by JP Koning at 11:32 PM