I executed one of the oddest financial transactions of my life earlier this week. I did Norbert's Gambit.

Outsiders may not realize how dollarized Canada is. Many of us Canadians maintain U.S. dollar bank accounts or carry around U.S. dollar credit cards. There are special ATMs that dispense greenbacks. Canadian firms will often quote prices in U.S. dollars or keep their accounting books in it. I suppose this is one of the day-to-day quirks of living next to the world's reigning monetary superpower: one must have some degree of fluency with their money.

Anyways, the first time I swapped my U.S. dollar income for loonies I did it at my bank. Big mistake. Later, when I reconciled the exchange rate that the bank teller had given me with the actual market rate, I realized that she had charged me the standard, but massive, 3-4% fee. In an age where the equivalent fee on a retail financial transaction like buying stocks amounts to a minuscule $20, maybe 0.3%, a 3-4% fee is just astounding. But Canadian banks are an oligopoly, so no surprise that they can successfully fleece their customers.

So this time I did some research on how to pull off Norbert's gambit, one of the most popular work-a rounds for Canadians who need to buy or sell U.S. dollars. From a moneyness perspective, Norbert's gambit is a fascinating transaction because it shows how instruments that we don't traditionally conceive as money can be recruited to that cause. The gambit involves using securities listed on the stock market as a bridging asset, or a medium of exchange. More specifically, since the direct circuit (M-M) between U.S. money and Canadian money is so fraught with fees, a new medium--a stock--is introduced into the circuit (like so: M-S-M) to reduce the financial damage.

To execute Norbert's gambit, you need to move your U.S. dollars into your discount brokerage account and buy the American-listed shares of a company that also happens to be listed in Canada. For instance, Royal Bank is listed on both the Toronto Stock Exchange and the New York Stock Exchange. After you've bought Royal Bank's New York-listed shares, have your broker immediately transfer those shares over to the Canadian side of your account and sell them in Toronto for Canadian dollars. Voila, you've used Royal Bank shares as a bridging medium between U.S. dollar balances and Canadian ones.

These days, Norbert's gambit no longer requires a New York leg. Because the Toronto Stock Exchange conveniently lists a wide variety of U.S dollar-denominated securities, one can execute the gambit while staying entirely within the Canadian market. In my case, I used a fairly liquid Toronto-listed ETF as my temporary medium of exchange, the Horizon's U.S. dollar ETF, or DLR. I bought the ETF units with my excess U.S. dollars and sold them the very next moment for Canadian dollars.

Below I compare how much Norbert's gambit saved me relative to using my bank: 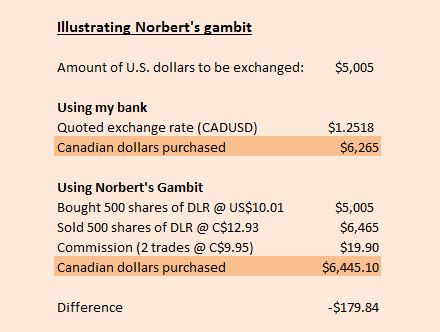 What is occurring under the hood? Norbert's gambit is providing a retail customer like myself with the same exchange rate that large institutions and corporations typically get i.e. the wholesale rate. Because there is a market for the DLR ETF in both U.S. dollar and Canadian dollar terms, an implicit exchange rate between the two currencies has been established. Call it the "Norbert rate". Large traders with access to wholesale foreign exchange rates set the Norbert rate by buying and selling the DLR ETF on both the U.S. and Canadian dollar side. If any deviation between the Norbert rate and the wholesale exchange rate emerges, they will arbitrage it away. Small fish like myself are thus able to swim with the big fish and avoid the awful retail exchange rate offered by Canadian banks.

This workaround is called Norbert's gambit after Norbert Schlenker, a B.C-based investment advisor who it to help his clients cut costs. Says Schlenker in a Globe & Mail profile:


"In 1986 I moved down to the States, and while I was there I needed to be able to change funds from U.S. dollars to Canadian and vice-versa, and I had a brokerage account in Canada. It came to me that I could use interlisted stocks to do this."

But using stock as money isn't just a strange Canadianism. Back in 2014, I wrote about other instances of stocks serving as a useful medium-of-exchange. During the hyperinflation, Zimbabweans used the interlisted shares of Old Mutual to evade exchange controls, lifting them from the Zimbabwe Stock Exchange to London. Earlier, Argentineans used stocks (specifically American Depository Receipts) in 2001 to dodge the "corralito". But I never imagined I'd use this technique myself to skirt around Canada's banking oligopoly!
Posted by JP Koning at 9:53 AM