Are Argentinians paying for Uber rides with bitcoins? 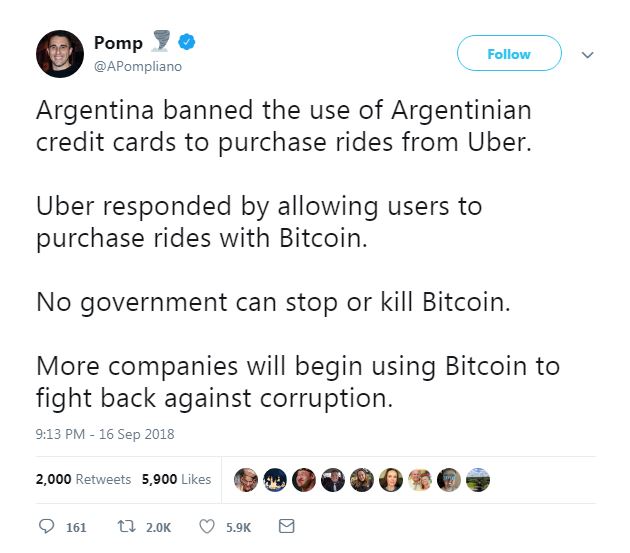 The tweet comes from Anthony Pompliano, aka Pomp, who works at Morgan Creek Digital Asset where he runs a cryptocurrency fund.

So, have I been wrong all along about bitcoin? As anyone who has been reading me for a while will know, I've been skeptical of the bitcoin-as-money story. Rather than fulfilling Satoshi Nakamoto's vision as being a next generation medium of exchange, bitcoin has gone mainstream as a new type of gambling technology—an exciting decentralized zero-sum financial game. This is a somewhat useful role, but let's face it, it's not quite as revolutionary as digital cash.

But if Argentinians are indeed hailing rides and paying drivers directly with bitcoins, as Pompliano seems to be saying, then maybe I've been too quick to dismiss the bitcoin-as-money scenario. Paying for stuff is exactly what Satoshi Nakamoto intended bitcoin to do, right? So I dug further into the tweet.

Twitter: Couldn't find anything in the news about this. Anyone got a solid source?
Pomp: https://cointelegraph.com/news/uber-switches-to-bitcoin-in-argentina-after-govt-blocks-uber-credit-cards
Twitter: Pomp that was 2 years ago
Pomp: Does that make it less important?

And that's how Pomp left things. So it looks like I've got some work to do.

Here's the fine print. In 2016, the City of Buenos Aires ordered the major credit card companies to block Uber's App. Stanford Law School's WILmap project has a detailed post on this. So Argentinians suddenly found that while their MasterCard and Visa cards worked for everything else, they could no longer be used to get an Uber ride.

Contra Pompliano, Uber did not respond by allowing users to purchase rides with bitcoin. Rather, the company pointed out that anyone who had a certain type of pre-paid debit card could sneak by the Uber embargo.

To carry out the hack, the first thing that an Argentinian had to do was to apply for a prepaid debit card from any of Entropay, EcoPayz, Payoneer, or ZapZap. These are non-Argentinean payments companies. Entropay, for instance, is based in Europe and issues Visa-branded debit cards in partnership with a Malta-based bank, Bank of Valletta. Once Entropay had approved an Argentinean for an account, either a physical debit card would be sent by mail to the applicant's address in Argentina or a virtual card would be instantly created. An Argentinean could then log on to Entropay's website and use their local credit card, the same one that had had been neutered by the Uber embargo, to top up the Entropay prepaid debit card. With the debit card now funded, it could be used locally to pay for Uber rides.

The nub seems to be this: the ban seems to only have applied to payments instigated by domestically-issued cards. When payments to Uber originated from Entropay or any of the cards listed above, they were earmarked as originating internationally, in Entropay's case probably from Malta-based Bank of Valetta, and so Entropay payments were able to squeak by. Voila, by swapping domestic cards with international ones, Argentinians could avoid the blockade.

A number of bitcoin debit cards also enabled the hack, including Xapo and Satoshi Tango. Maybe this is what Pomp is referring to in his tweet. But it would be wrong to say that these cards allowed Argentinians to "purchase rides with Bitcoin," as he claims.

Prior to paying for an Uber ride, an Argentinian had to load U.S. dollars onto the bitcoin debit card by selling bitcoins for dollars on a bitcoin exchange. Either the card owner did this manually, or the card provider rapidly sold bitcoin in the very same instant that the payment was requested. In either case, bitcoins weren't flowing from the card holder to Uber. A fiat currency had been pre-loaded onto the card, and everything after that was just a  regular transfer over the Visa or MasterCard network.

These bitcoin debit cards are really no different from gold-based debit cards. Nor are they any different from the cheque-writing and debit card privileges provided by some U.S. money market mutual funds. Neither bitcoins nor gold not mutual fund units are being transferred from the card holder to the seller. Rather, each item is being quickly sold and turned into fiat, then processed along the same rails as any other payment.

In theory, all sorts of assets might be debit card-ized in this way. Buy a coffee with your Facebook debit card, for instance, and underneath the transaction's hood your Facebook share(s) are being quickly sold on the stock market for dollars, those dollars being the medium that ultimately settles the payment between you and the cafe. Complicating matters is that Facebook shares, which trade at $165, can't be cut into fractions, unlike bitcoins or fractions of a gold bar, so paying for a $3 coffee might get a bit awkward.

So returning to the tweet, recall that Pomp proclaimed that "more companies will begin using Bitcoin to fight back against corruption." But this wasn't the case with Uber. As you can see from the above, the company fought back by pointing to a neat hack of the existing credit card networks. The reason that Xapo and Satoshi Tango bitcoin cards were able to enable Uber purchases in Argentina wasn't because of their unique bitcoin nature. In Xapo's case, the card was issued by Wave Crest Holdings, a Gibraltar-based company. Like a regular fiat-based Entropay card, the incoming Xapo card payment was classified as an international one, and thus it escaped the domestic blockade.

Most bitcoin debit cards are no longer functional. Wave Crest, the card provider through which most bitcoin firms partnered, was suspended by Visa for non-compliance with Visa's rules in early 2018. If you go to VoyEnUber.com, an independent Argentinean website that reports on Uber, you'll see that it has delisted Xapo and Satoshi Tango from its list of ways to pay for Uber. The non-bitcoin prepaid debit cards are still there. So Pomp's tweet is twice wrong: 1) not only were Argentinians not using bitcoin to pay for Uber rides in 2016, but; 2) by the time of his tweet, they are not even making Xapo card payments, since Visa has cut that option off.

In addition to using foreign cards to pay for Uber rides, it seems that people in Buenos Aires are also paying with cash. According to the article, when riders pay with banknotes, there is no way for Uber to collect its 25% commission, so driver's are increasingly indebting themselves to the company. Or put differently, drivers are accepting cash, then paying Uber with a personal IOU. The irony here is that a combination of old fashioned fiat banknotes and trust-based IOUs—not bitcoin—are being used to "fight back against corruption."

So be careful what you read, folks. This sort of reminds me of the Zimbabwe bitcoin story from last year, which was seen as a crystallization of the long-held dream that bitcoin would help unbanked Africans. I rebutted that particular myth here.

Pompliano seems like a nice guy, so I'll just assume that excitement got the best of him. I normally try to avoid someone is wrong on the internet posts, but since he has over a 100,000 followers on twitter, and this particular meme has been retweeted over 2,000 times, I feel like it's my duty to try undo some of his error. The good thing with twitter is you can untweet retweets, feel free to go ahead and do that right now. :)
Posted by JP Koning at 11:35 AM