I've written before about an exotic type of unit-of-account known as an abstract unit of account. A nation's unit of account is the symbol used by its citizens and businesses to advertise and record prices. Here in Canada we use the $ while in a country like Japan people use the ¥. The national unit of account almost always corresponds to the national medium-of-exchange. In both Canada and Japan, the $ and the ¥ amounts advertised in shop aisles are embodied by physical dollar and yen banknotes and coins.

Abstract units of account, on the other hand, don't correspond to anything that exists. In the UK, for instance, race horse auctions are priced in guineas, a gold coin that hasn't been minted in over two centuries. The guinea is a ghost money, an accounting unit that according to John Munro is "calculated according to the precious metal content of some famous, once highly favoured coin of the past than no longer circulates."

There are some strange units of account out there. In the UK, race horse auctions are priced in guineas, a coin that hasn't been minted in over 200 years. Source: https://t.co/cGujWAmlO8 One guinea = Sterling £1.05 pic.twitter.com/vMv927yooU
— JP Koning (@jp_koning) January 29, 2019


Other examples of abstract units of account include include Chile's Unidad de Fomento, or UF, (which I wrote about here) and Angolan macutes (see here).

Like the guinea, the Haitian dollar is an abstract unit of account. I should warn you that I've never been to Haiti--all of this comes from what I've read in tourist guides, newspapers, Haitian blogs, and an academic paper on the topic from Federico Neiburg. But from what I understand, it is quite common for prices in Haiti to be set in a unit referred to as the 'Haitian dollar.' However, there is no corresponding Haitian dollar banknotes or coins. The U.S. dollar and the Haitian gourde, a currency managed by Haiti's central bank, circulate in Haiti and are used to consummate all payments. But the Haitian gourde is not the same as the Haitian dollar.

How does this work in practice? Say that a restaurant is selling sandwiches for fifteen Haitian dollars. Paying with Haitian dollars is impossible--they don't exist--so some other route must be taken to complete the deal. Haitians have spontaneously adopted a rule of thumb that the Haitian dollar is equal to five Haitian gourdes. So to pay for the sandwich, it will be necessary to hand over 75 gourdes (H$15 x 5$H/HG).


A certain degree of mental gymnastics is thus required of Haitians, since sticker prices must always be multiplied by five (to arrive at the gourde amount) and banknotes held in a wallet divided by five (to arrive at the Haitian dollar amount). For foreigners, this can be confusing, but for Haitians the motley of U.S. dollars, gourdes, and the Haitian dollar unit of account has become second nature. Says Nieburg:


"The adjective Haitian (aysien), as in dolà aysien, is only used when one of the participants in a transaction is foreign. Among Haitians, when people say dolà they always mean dolà aysien."


"...in the urban islands of foreigners scattered across various regions of the city, the US dollar predominates as a unit of account and means of payment in sectors such as the housing market, as well as in restaurants, hotels, night clubs, and supermarkets (which used to double as currency exchange bureaus) that cater for upper-class Haitians and the legion of ex-pats, relief workers, and consultants. As we move down the social scale, the US dollar begins to be used as a means of payment for transactions calculated in Haitian dollars. Lower down—where the majority of transactions are to be found—people calculate in Haitian dollars and pay in gourdes."

Where does the practice of using the Haitian dollar come from? I wasn't aware of this, but during WWI the U.S. invaded Haiti, occupying it till 1934. There was a strong German mercantile presence in Haiti and apparently the U.S. authorities feared that Germany might take over.

By 1918 the government's gourdes had become "so worn and torn" that a shortage of banknotes arose. As part of a 1919 U.S.-initiated monetary reform, all previous issues of gourdes were to be replaced by a new issue by the Banque Nationale de la Republique d'Haiti, which by then was owned and controlled by New York-based City Bank (and would eventually become Citigroup). The BNRH was granted a monopoly on banknote issuance, which meant that the Haitian government could no longer print its own currency.

The new banknotes were to be convertible into U.S. dollars at a rate of five gourdes to the dollar, a promise that the BNRH printed on the face of each bill, as the images below illustrate.

Even after the U.S. occupation ended and City Bank sold the BNRH back to the Haitian government, the promise to redeem gourdes with U.S. dollars continued. This peg stretched right through the rule of "Papa Doc" Duvalier until the gourde was finally untethered from the dollar in the late 1980s.

So several generations of Haitians had become used to a five-to-one ratio between U.S. dollars and gourdes. Dividing a price by five in order to get the U.S. dollar price may have become such a standard piece of mental arithmetic that the practice continued into the 1990s and 21st century, even after the calculation's answer no longer corresponded to the correct U.S. dollar amount. The Haitian dollar may simply have been a placeholder that was invented in order to provide continuity for the age-old custom of dividing by five. 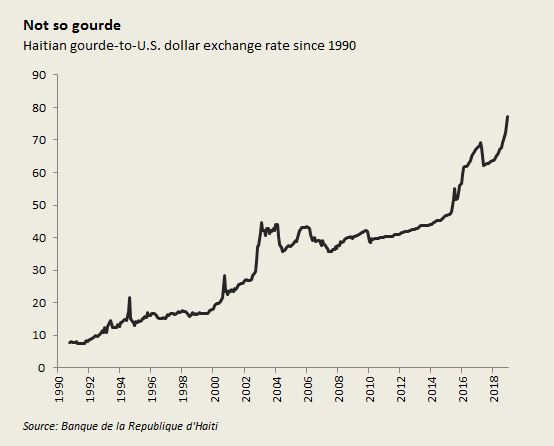 Since it was unpegged, the Haitian gourde has fallen consistently against the U.S. dollar, possibly contributing to the tradition of using the Haitian dollar unit. Quoting prices in Haitian dollars could be a non-violent way for Haitians to show their dissatisfaction with their government's finances. Or perhaps it is a marketing trick that Haitian merchants use to make their wares seem less cheap, sort of like how shopkeepers here in Canada often set prices at $4.99 instead of $5.00.

According to Nieburg, the government has even tried to ban the practice of pricing in Haitian dollars. Intellectuals who support the measure have condemned the abstract unit as just "another sign of the country’s backwardness." But the attempt failed. Units of account are just a part of language. And language is very difficult to control.

The Haitian dollar is probably the best (and simplest) modern example I've ever run into of an abstract unit of account. For monetary enthusiasts like myself, it provides a great illustration of the many different functions packaged into the thing we call "money." These functions needn't be unified into one object or instrument. They can be split up, so that the instruments that we pass from hand to hand (or from phone to phone), the so-called medium-of-exchange, no longer correspond to the symbol used for pricing, the unit-of-account.

Nobel Prize winning economist Robert Shiller has written enthusiastically about so-called monetary separation. William Stanley Jevons's tabular standard, which was never implemented but has been considered by some to be the ideal monetary system, relies on a split between the medium-of-exchange and unit-of-account. Rather than being backwards, the sort of Haitian dollar standard that we see in modern Haiti could one day become the guiding principle of the monetary systems of the future.
Posted by JP Koning at 3:54 PM