In 2011, hedge fund manager Kyle Bass reportedly bought $1 million worth of nickels. Why on earth would anyone want to own 20 million nickels? Let's work out the underlying logic of this trade.

A nickel weighs five grams, 75% of which is copper and the rest is nickel. At the time that Bass bought his nickels, the actual metal content of each coin was worth around 6.8 cents. So Bass was buying 6.8 cents for 5 cents, or $1.36 million worth of base metals for just $1 million.

To realize this 6.8 cents, Bass would have to sell the copper and nickel as metal, not coin. But liberating the actual metal from each token isn't so easy. Since 2006 it's been illegal to melt pennies and nickels down. As a regulated hedge fund manager, Bass probably isn't willing to break the law. Which means he'd only be able to realize the metal content of nickels indirectly, by on-selling them to a buyer who is willing take on the risks of melting nickels. That wouldn't be me, mind you. Five years in jail sounds like a long time.

At the right price, would-be smelterers will surely emerge out of the woodwork to buy Bass's stash. Say the prices of nickel and copper explode such that a nickel now contains 20 cents worth of metal. Bass should have no problems finding someone who'd pay him 12-15 cents for each of his nickels. Bass wouldn't be doing anything illegal, he'd just be selling nickels on to a stranger at a premium. And given that he only paid face value for each nickel, he'd be more than doubling his bet.

So Bass has upside exposure to the next bull market in copper and nickel prices. The neat part of this trade is that he has no downside exposure. That's because a nickel can never be worth less than its face value of five cents. For example, consider that the price of base metals has fallen by quite a bit since Bass bought his stash of nickels. And so the melt value of a nickel has tumbled too, currently registering at around 4 cents, or 41% less than when he bought them. But Bass needn't worry. His nickels can still be taken to the Federal Reserve where they can be exchanged for twenty to the dollar, or five cents each.

Huge upside and no downside—why isn't everyone doing this trade? There's a catch. Carrying costs. Bass's trade has yet to pay off. A bull market in commodities hasn't developed. Which means that Bass has had to store 20 million nickels for eight years. But storing stuff isn't free. What follows is an estimate of the cost of doing so.

The first big cost that Bass faces is storage. His nickels take up a lot of space. Stacked one on top of the other, would twenty million nickels fit into a standard 20 foot freight container? Given that a container measures 8 x 8.5 x 20 ft, it has enough space to fit around 32,700 nickels per layer, 1,328 nickels high. That's room for 43,480,000 nickels—more than enough for Bass's hoard.

Stacking individual coins on top of each other isn't a realistic storage technique. Imagine the amount of time this would take. The industry standard for storing and handling large amounts of coins is using certified bags. According to the Fed, the standard bag size for nickels is $200, or 4,000 nickels per bag. In addition to bags, it also typical for banks to sell customers boxes filled with $100 worth of rolled-up nickels. Either bagged or boxed, there will be plenty of 'honeycombing,' or gaps between coins and packaging material. 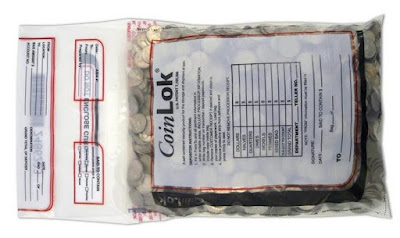 Bass's hoard would be extremely heavy, far exceeding the capacity of a lone shipping container. Twenty million nickels weighs 100,000 kg, or 220,462 pounds. But a 20' container is only rated to hold 25,000 kg (55,120 lbs). Both the weight of the coins and the honeycombing effect mean that it could take as much as four freight containers to handle $1 million worth of nickels.

Bass could find a farmer who would be willing to store four freight containers in his field for a few hundred bucks a year. But he probably wants something more formal than that. One option is a warehouse. Warehouses charge by the pallet. A pallet can hold up to 4,600 lbs worth of goods, which works out to around 417,000 nickels, or 104 bags per pallet. Which means Bass will have to store 48 pallets of nickels.

I searched around a bit and found that warehouses generally charge a monthly fee of anywhere from $5 to $20 per pallet. There are a lot of variables that can affect this amount. If the pallets are stackable, and thus take up less floor area, then the monthly fee will be less. Location of the warehouse is another factor. Securing space in the vicinity of New York costs more than Des Moines.


Given that Bass has the flexibility to choose an out-of-the way warehouse (he doesn't need to access his inventory every few days), he should be able to get a cheap deal. Let's assume $5/month per pallet. With 48 pallets of nickels, that works out to around $2875 per year, or 0.29% of the total value of his $1 million stash.

Bass probably wants to insure his nickels for theft and damage as well. Commercial property insurance seems to cost around $750 per year for each million dollars insured. Over eight years, that's $6000, which brings Bass's stash of nickels down to $971,000.

The last major cost is foregone interest. Instead of investing his $1 million in Treasury bills, Bass is keeping his wealth inert in warehoused nickels. Interest rates have been pretty low for the last decade, which means that Bass has only given up around 0.1 to 0.15% per year in interest income, or $1500. So for the period between 2011 and 2016, he would have given up about $9,000 in interest. That brings the value of his nickles down to $962,000.

So as you can see, even though Bass doesn't have to worry about taking a capital loss on his stash of nickels, the ongoing grind of carrying costs means that it's been a pricey trade. In eight years he's down by around $70,000, or 7%. In the end it could still all be worth it. If base metal prices triple, he'll still be able to make a lot of money on his initial investment. And I'm sure they will triple... at some point.

I've described the nickel trade from Kyle Bass's perspective. But let's view it from the perspective of the taxpayer. The U.S. Mint and the Federal Reserve (and therefore the taxpayer) are providing Bass with the opportunity to win big while offering him protection him from capital losses. In options lingo, they've sold him a put option. Is this a smart thing to do? Bass's isn't an isolated trade. For every Kyle Bass there are probably dozens of others trying the same thing. So the stakes aren't small.

The taxpayer is not providing this put option for free. There is at least some quid pro quo. In choosing to hold $1 million in nickles, Bass is effectively loaning money to the government at an interest rate of zero. If Bass had chosen to hold $1 million in Treasury bills instead of coins, the government would have to pay him 2% a year in interest, or $20,000. Coins don't yield interest, so the government needn't pay Bass a cent for his loan. We can think of the $20,000 in interest as the fee or compensation that tax payers get for providing Bass with downside protection on his speculative bet on metals prices.

But is the government extracting enough out of Bass for the trade? When interest rates were still at 0.1% a few years back, and Bass's yearly interest costs were a mere $1,000, Bass was probably getting the better end of the deal. But with rates at 2%, it's not so obvious who is coming out ahead. Whatever the case, should the government even be in the business of providing principle-protected commodity bets to citizens? Aren't exotic financial bets more Goldman Sach's game?

One way for the government to extract itself from these bets would be to reduce the commodity value of the nickel. Put differently, it can debase the coinage. The last time the U.S. debased the nickel was in 1965 when it stopped minting them with silver.

The U.S. Mint could carry out a debasement by switching to steel, which is cheaper than copper/nickel. With a lower metal value, the nickel would be much less inviting for Bass and other speculators. He'd need a much bigger bull market in metals prices before he'd be able to break even.

Or maybe the U.S. could adopt plastic nickels, like Transnistria.


Whether steel or plastic, the key is to avoid an possibility of being Bass's dupe.

An even better way to avoid being the dupe? The nickel is monetary pollution. Let's just get rid of it. It made sense to have a five-cent coin back in the 1950s. A five cent coin back in the 1950s would have been worth about as much as a fifty cents, and fifty cents is a meaningful amount of money. You can buy stuff for fifty cents, say a cheap drink. But go to a grocery store today and try to see what you can buy for a nickel. Nothing.

Most nickels are used just once. Cashiers pays them out as change to customers, and from there they go straight into people's cupboards where they are forgotten. Or they get thrown in the trash. Or they're hoovered up by speculators like Kyle Bass. All of this is socially wasteful behaviour. Bass's speculation is no exception: the resources he consumes storing nickels could be put to far better use. Let's put an end to all this waste by ceasing to produce five-cent coins.
Posted by JP Koning at 1:19 PM

Email ThisBlogThis!Share to TwitterShare to FacebookShare to Pinterest
Labels: coins, store of value