I recently spent some time on Twitter discussing the monetary wonders of Starbucks. In this post I'll bring a bunch of tweets together into a single blog post.

I don't go to Starbucks very often, so I only recently learnt that the company has succeeded in getting many of its customers to stop using cash and debit/credit cards to buy coffee. Instead, they are using  Starbucks's own payments option:

Wow Starbucks, what a great gig.

Starbucks has ~$1.6 billion in 'stored value card liabilities' i.e. the Starbucks Card. So ~6% of the firm's liabilities are comprised of coffee addicts paying 0% for the privilege of lending to their supplier.
Source: https://t.co/nGH2arujYz pic.twitter.com/cGcSW3L4MM
— JP Koning (@jp_koning) August 11, 2019

Starbucks has around $1.6 billion in stored value card liabilities outstanding. This represents the sum of all physical gift cards held in customer's wallets as well as the digital value of electronic balances held in the Starbucks Mobile App.* It amounts to ~6% of all of the company's liabilities.

This is a pretty incredible number. Stored value card liabilities are the money that you, oh loyal Starbucks customer, use to buy coffee. What you might not realize is that these balances  simultaneously function as a loan to Starbucks. Starbucks doesn't pay any interest on balances held in the Starbucks app or gift cards. You, the loyal customer, are providing the company with free debt.

Starbucks isn't the only firm to get free lending from its customers. So does PayPal. That's right, customers who hold PayPal balances are effectively acting as PayPal's creditors. Customer loans to PayPal currently amount to over $20 billion. Like Starbucks, PayPal doesn't pay its customers a shred of interest. But Starbucks's gig is way better than PayPal's. PayPal is required to store customer's funds in a segregated account at a bank, or invest them in government bonds (see tweet below). So unfortunately for PayPal, it earns a paltry amount of interest on the funds that customers have lent it.

PayPal is a good example of a modern 'narrow bank'. Customers have deposited ~US$20 billion at PayPal. And PayPal invests these funds in very boring things listed below, like bank deposits, time deposits, government debt etc.


Starbucks, on the other hand, doesn't have to keep customer funds in a low yielding segregated account or government bonds. Why is that? PayPal allows people to cash-out of PayPal dollars into regular dollars, so for regulatory purposes it must keep an adequate reserve on hand to facilitate redemptions. But the only way to cash out of Starbucks balances is to buy a coffee--a promise that Starbucks can always keep! And so Starbucks can immediately put its customer loans to work in higher-yielding opportunities like funding its operations and expansion.

In addition to borrowing from its customers, Starbucks also borrows from professional investors. Here's a list Starbucks's long-term debt: 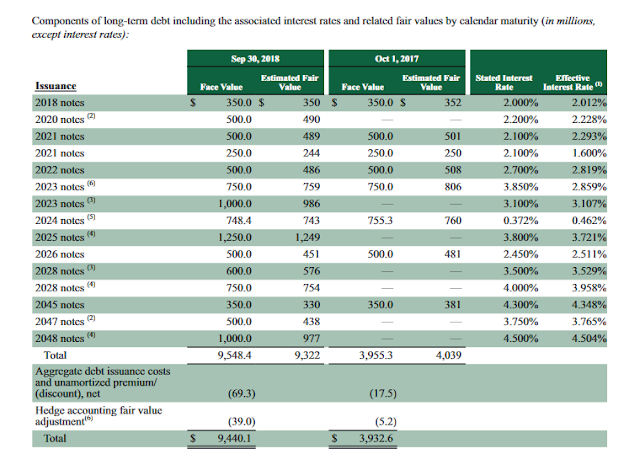 Starbucks is paying an interest to bond and note-holders that ranges as low as 0.46% (on its yen notes maturing in 2024) to 4.5% (on its 2048 notes). You can see why borrowing from customers in the form of stored value card liabilities is the better option. By expanding its borrowing from its non-professional lenders and using the proceeds to cancel its debts to professional lenders, Starbucks can make an immediate profit.

But there's more. As I pointed out in the following tweet, don't forget breakage. Bond and note holders are pros. They don't forget about debts. But customers aren't so exact. They are sloppy, or busy, or forgetful, which means that many gift cards and balances will go unspent:

Few companies can get that much free financing. But don't forget breakage—balances that will never be redeemed. In 2018 Starbucks recorded breakage of $155 million,~10% of all card balances.

So the true rate at which customers are lending to Starbucks is probably closer to -10%. pic.twitter.com/hRaN7LGoEf
— JP Koning (@jp_koning) August 11, 2019

On Twitter, Wayne points out to me that I need to add back the impact of Starbucks rewards. App users receive stars on each purchase which can be saved up for free coffee. This functions as a form of implicit interest that Starbucks pays to its customers.

I earn about 50% equivalent interest per year on my Starbucks card. 2 Americanos per week earns me a free one about once every 3 months. Roughly $12 per year in free purchases. I keep between $10-$25 balance on the card. Earning $12/year on a $25 investment is a good return.
— Wayne Culbreth (@wayne_culbreth) August 11, 2019


That's a good point. But if were going to bring rewards into our calculation, then there are other non-pecuniary flows that need to be added in too. Keep in mind that each payment made through the Starbucks app is a payment that isn't made by credit card. Since each credit card payment will cost Starbucks 1-2% in interchange fees paid to the card networks and banks, the company saves a lot of money by guiding customers to its payments app. As for Wayne, while he may earn an implicit interest return in the form of Starbucks points, by forgoing a card payment he's giving up on the associated cash-back or airline points.

Another flow that needs to be accounted for is data. By capturing the customer's wallet, Starbucks is getting loads of free but valuable personal information that would otherwise be lost, or for which it would have to pay. Any customer who pays with cash forgoes rewards, but at least they get to retain their information.

Adding all of this up, (0% interest + breakage - rewards + interchange savings + customer information), Starbucks's stored value liabilities are a terrific liability to have.

More generally, I think this calculation demonstrates how providing financial services to a retail customer base is a great business. Retail customers don't seem to be too fussy about the return they get. And they are busy and distracted and sloppy and forgetful. Take central banking, for instance, which serves a retail clientele. People are pretty happy to hold banknotes that pay 0%. But you never see businesses or professional investors hoarding banknotes. They quickly return the cash they take in during the course of the day to their bank so that they can harvest interest. Commercial banking is also a good example. Like Starbucks, banks are able to borrow from their retail customers at a measly rate approaching 0%. But professionals who lend to banks by purchasing their bonds require a much higher rate. To top it off, retail customers unnecessarily sign up for high-fee products and avoid changing banks when there is a cheaper option.

Why doesn't every retail chain try get into this game? By borrowing as much as they can from the non-professional public, they'd steal plenty of profitable business from central banks and retail banks. Well they do. Gift cards are a big business. And if you think about it, retailers are perfect candidates for providing monetary services to the masses. Like banks, they already have a network of physical stores. But none of them have been successful at it as Starbucks. Walmart is much bigger than Starbucks, for instance, but it has just as many gift card balances outstanding:

Walmart's annual sales are 20x larger than Starbucks sales (~$500b vs $25b). But Walmart only has $1.9 billion in unredeemed gift card balances, not much more than Starbucks. Source: https://t.co/LBs6DE1cGq pic.twitter.com/wtJltMt26L
— JP Koning (@jp_koning) August 11, 2019


Perhaps Starbucks's success has to do with the regularity and homogeneity of Starbucks purchases? And so customers are willing to preload a dedicated account? I'm not sure.

In any case, there are probably a few Starbucks executives who'd love to grow the amount of negative yielding liabilities that the firm issues. Why stop at $1.6 billion in stored value liabilities? Why not grow the program to $5 billion, $10 billion, or $100 billion? It would be a terrific business line to get into.

The problem here is that Starbucks only sells coffee. Coffee is great, but the demand for dollars that are only useful for buying coffee will always be limited. To really grow the amount of stored value liabilities it issues, Starbucks would have to increase the usefulness of Starbucks dollars. One way to do this would be to open up the Starbucks app up to other stores. If consumers could also buy Big Macs with the balances on Starbucks App, this would increase the demand for Starbucks balances. To secure McDonald's cooperation, Starbucks would have to share the savings, breakage, and data. Maybe companies like Home Depot and Costco would join the Starbucks-McDonald's alliance. (And other chains, say Kroger and Burger King, might join the competing Walmart Pay alliance).

Sure, each of these companies could simply pursue their own independent stored-value liability programs. But wouldn't an alliance be better? From the customer's perspective, balances held in a single payments app that can be spent at Starbucks, McDonald's, Home Hardware, or Costco would be far more useful then dollars held in four separate and walled-off apps. And so collectively these stores should be able to get the public to hold more stored value card liabilities than they could individually. Which means more breakage, free loans, and data for everyone (and less for the banks, card networks, and central banks).

Who knows if it would be successful. And it might not even be possible from a regulatory perspective. But it would be tempting, no? In a world where most debtors have to pay interest, being  a debtor who earns interest is pretty hard to beat.


*I believe that current portion of deferred revenue is equal to around $174 million. This comes courtesy of the current portion of an up front royalty payment from Nestlé. So the stored value card liability is actually closer to $1.46 billion. Still pretty high.
Posted by JP Koning at 9:35 PM