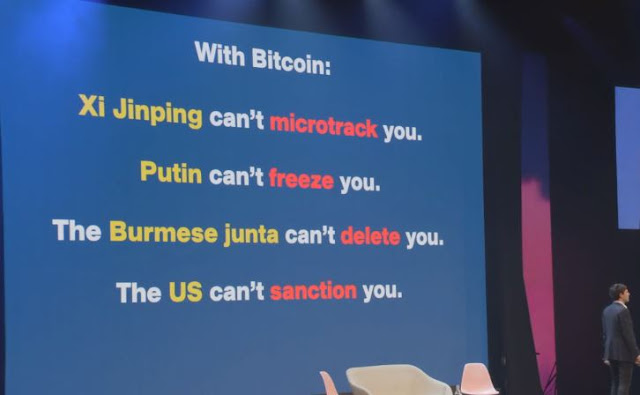 I recently watched a video with Alex Gladstein on the importance of financial privacy. In general I agree. We should be working on expanding the scope for transacting privately, although I am conscious of the tradeoffs. Anonymity helps good people evade bad rules, but we need to be wary of how it abets bad people evading good rules. (See for instance my recent post on the good & bad of using prepaid debit cards to donate anonymously).

In the above list, Gladstein intimates that bitcoin has a positive role to play in evading U.S. sanctions. I have two quick points to make.

One (admittedly-blunt) sorting mechanism for determining the morality of U.S. sanctions is how much international consensus there is on levying them. If plenty of nation's support sanctioning a regime then the odds that the target is a genuinely bad actor are higher than if just the U.S. thinks so.

Trump's recent round of Iran sanctions has almost no international buy-in. America's European allies are furious that the U.S. left the Iran nuclear deal, a carefully negotiated agreement to control Iran's access to nuclear technology. The Chinese and Russian are upset too. On the other hand, Obama's earlier round of Iran sanctions had broad support. Even Russia and China were on board.

So if consensus is a reasonable hurdle for judging sanctions, then Trump's Iran sanction don't pass muster, but Obama's passed the smell test.

All of which is to say that if bitcoin is indeed an effective tool for evading the current round of Iranian sanctions, then it had a negative role to play as spoiler to the previous round of "good" sanctions. Bitcoin might have delayed (or prevented) the 2015 Iran nuclear deal that did eventually emerge. Which would have been unfortunate.

If we do care about the morality of sanctions, bitcoin doesn't really solve anything. We need to get the sanctions correct at the outset. Don't like Trump's Iran sanctions? Try to convince your neighbours about it. Tell your American friends. Go to a protest. Dial up your government representative. Yep, it's an incredibly blunt tool. But it's the best we got.

The second point I want to make concerns how useful bitcoin actually is as a sanctions buster. In his presentation Gladstein mentions Ziya Sadr, an Iranian who can't use Visa or PayPal but can use bitcoin.

I CAN use Bitcoin


Sure, Bitcoin may give some tech-savvy Iranian freelancers a means to connect to external buyers. But it hasn't helped where it really counts. It hasn't allowed Asian refiners to keep buying Iranian oil or European manufacturers to keep their factories running. Pretty much every foreign company has stopped dealing with Iran. As a result, the nation's oil exports have cratered and its economy has gone into a tailspin. This has had a tremendously negative effect on regular Iranians.

Let's not just single out bitcoin for being ineffectual. The euro, the world's second largest currency, has also been a useless sanctions buster.

Last month I wrote a post about why U.S. sanctions are so effective. Let me give a brief recap. A foreign company--say a European refiner--currently has to choose between continuing to buy crude oil from Iran or no longer accessing U.S. markets. This means not only being shut off from U.S. energy exports, but also doing without U.S refining technology, expertise, and financial access. Any refining executive who ignores the sanctions could be blacklisted from entering the U.S. for travel, or sending their kids to U.S. schools, or getting U.S. medical care.


And so given an explicit choice between the US and Iran, most companies have chosen the US, since it has much more to offer. In our globally interconnected world, the population of willing-to-be-sanctioned companies is pretty much non-existent.

Having some sort of alternative money like euros or bitcoin doesn't provide much of a work-around.

Say that our European refiner decides to do a bit of business with Iran under the table in euros (or bitcoin) rather than dollars. All sorts of people will touch this transaction, not just the payment side but also the movement of crude. A banker, a bitcoin exchange, or a freighter captain could rat the refiner out to the US Justice department. And so the refiner would be fined or even worse blacklisted, which would means losing all access to US resources. The risk is simply too high.

In sum, the case for bitcoin as a sanctions buster is not clear-cut. Genuine evil leaders probably should be sanctioned, the less ways to short-circuit the blockade the better. And given the way that U.S. sanctions are structured, bitcoin may not provide much help anyways.
Posted by JP Koning at 7:06 AM