Every few days for the last month or so I've been refreshing a Federal Reserve page that shows data about daylight overdrafts. For some reason the Fed only updates it every few months. I had been getting quite curious to see what happened during the great September interest rate spike. Well, finally the Fed has uploaded the data.

If you don't know about the September rate spike, I'd suggest reading Nathan Tankus's tweet, listening to David Beckworth's podcast with Bill Nelson, or picking through this blog post from Stephen Cecchetti and Kermit Schoenholtz. In short, there was a sudden increase in the demand for Fed balances (also known as reserves), and the Fed was slow to react by increasing the supply of balances. And so the rate at which banks were willing to borrow balances spiked to desperation levels.

Why did the demand for balances increase?

That's where daylight overdrafts can inform us. By way of background, the Fed has had a long-standing policy of providing banks with daylight overdrafts. These are loans that last a few minutes or hours and are always paid back by the end of the day.

Why overdrafts? Banks often have to make large and unexpected payments to other banks on behalf of their customers. To facilitate this, banks keep balances on hand in payments accounts held at the Fed. For instance, say that Microsoft wants its bank to wire $200 million to Google. Microsoft's bank tells the Fed to debit its account and credit the account of Google's bank by $200 million.

Banks have to pay a fee for each minute that they borrow from the Fed. They can avoid this fee by providing collateral to secure the loan. Collateralization protects the Fed from fallout should a bank that is in overdraft go bankrupt. Either way, overdrafts are costly to banks. Fees must be coughed up or collateral sacrificed.

In the 2000s, the Fed kept a tight lid on the supply of balances it issued. Banks couldn't keep very much money in their Fed accounts--there just wasn't that much of it. So there was a big demand to get daylight overdrafts from the Fed to facilitate payments like the one between Microsoft and Google.

But during the credit crisis, the Fed created a massive amount of balances. Suddenly, banks could (and did) keep a lot of money at the Fed. And so when Microsoft wanted to pay Google $200 million, Microsoft's bank just didn't have to rely on overdrafts anymore. Odds were that it already had the money in its account. Overdraft usage cratered, as the chart below illustrates. Whereas peak Fed daylight overdrafts typically came in near $250 billion in 2008, by 2013 peak borrowing by banks typically registered below $10 billion. 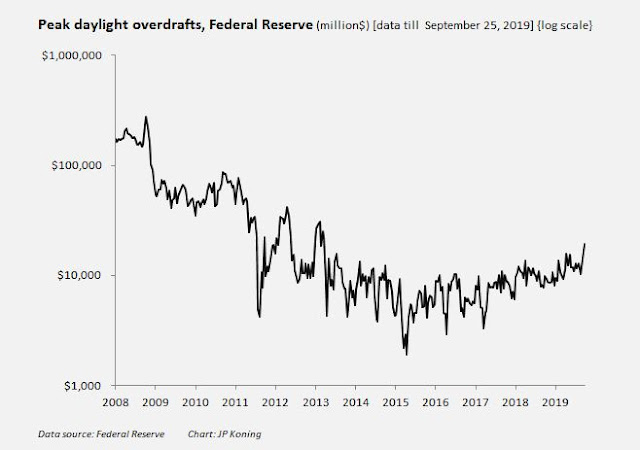 (Note, to bring out the data I have used a log scale for this chart, which may not entirely convey the degree to which overdraft usage collapsed.)

Which leads back to the September jump in demand for Fed balances. One potential explanation is that banks are concerned about holding sufficient liquidity in anticipation of customer payment requests. Perhaps banks are running into more situations in which they can't immediately satisfy Microsoft's request to pay $200 million to Google, and so they want to build up the amount of balances they keep in their accounts at the Fed.

But if this was the case, we'd also expect to see a big jump in overdrafts. After all, overdrafts are an alternative way for Microsoft's bank to satisfy Microsoft's payment requests. The chart above shows that peak daylight overdrafts clocked in at $19 billion during the two-week period ending September 25, the highest level since 2013. But that's still a tiny amount compared to $250 billion in 2008.

So the big jump in the demand for Fed balances probably arises from something other than a desire on the part of banks to facilitate routine intraday payments flow. Banks still aren't making much use of daylight overdrafts, a good indication that they still have plenty of balances on hand for transactional purposes. Other motivations must be behind the demand for Fed balances, presumably various regulations that might not have existed in 2008 or increase supervisory expectations.
Posted by JP Koning at 12:20 PM