What happens when a 96 bitcoin ransom payment ends up on Bitfinex?

This is a snippet from a recent court case concerning ransomware that just crossed my desk. Companies that fall victim to ransom attacks fear the publicity it might attract, so the details of these attacks are usually swept under the table. But in this case, the ransom payer—a British insurer that traced the bitcoins to Bitfinex, a major bitcoin exchange—has appealed to the UK High Court for an injunction, thus providing us with a vivid peak into the inner workings of an actual attack.

Ransomware is a big issue these days. A hacker maliciously installs software on a victim's computers, encrypts various files, and then asks for a bitcoin ransom to fix the problem.

It's the bitcoin leg of this transaction that has made these attacks economical. Prior to bitcoin, running an illicit business based on ransom payments was fraught. Bank accounts leave a paper trail. Cash, though anonymous, can't be transferred remotely. And gift cards are limited to small amounts. With bitcoin, hackers finally gained access to a form of electronic cash that allowed them to not only make remote ransom demands, but large ones too.

A steady parade of ransomware has since emerged. While early types of ransomware like WannaCry, CryptoLocker, and Locky targeted personal computers for small amounts of money, the most recent strains—Maze, Sodinokobi, Nemty, and others—attack governments and enterprises for million dollar amounts. The Nunavut government, a territory in Northern Canada, was a recent victim:


One thing I've never really understood is why ransomware can be so widespread given that all bitcoin transactions are written to the public blockchain. I mean, can't a bitcoin ransom payment be easily tracked to its final destination, say a bitcoin exchange, and frozen?

The court case in question, AA v Persons Unknown & Others, Re Bitcoin, provides some insights into just that. Although the judge heard the case back on December 13, 2019, the text of the injunction was only released a few days ago.

It makes for entertaining reading. Here's a short timeline:

So were the 96 bitcoins returned to the insurer?

For now, we don't know the final outcome. The document only brings us up to December 13, 2019, when the judge gave Bitfinex till December 19 to provide the names of “persons unknown”, the owner of the 96 bitcoins. To prevent "persons unknown" from getting wind of the proceedings and fleeing with their coins, the hearing was held in private and the text of the case suppressed. The document having been made public, we can assume that some sort of resolution was arrived at.

It's interesting to speculate what this resolution might have been. Bitcoin is still a relatively new, and thus largely undefined, phenomenon. As bitcoin cases slowly trickle into the court system, the decisions made by judges will be important in determining the eventual legal status of cryptocurrencies.

It could be that "persons unknown" is the same individual who perpetrated the initial ransom attack, and they just haven't yet sold the 96 bitcoins yet. In which case the conclusion is simple: the guilty party will be prosecuted and Bitfinex will return the bitcoins.

But it is more interesting (and more likely) that "persons unknown" is a third-party (say an over-the-counter broker) who bought the bitcoins from the hacker, and deposited them at Bitfinex, and hasn't sold them yet.

This third-party could be entirely innocent about the origin of the coins. They might try to say to the judge: "hey—we didn't know the 96 bitcoins we bought were linked to ransom payments. We shouldn't have to give them back."

But that's not how property law works. Even if you accidentally come into possession of stolen property—and surely ransomed bitcoins qualify as stolen—then a judge can still force you to give them back to the rightful owner. This would be bad news for the innocent broker. Being obliged to cough up 96 bitcoins could easily bankrupt it.

"Persons unknown" might respond to the injunction by pleading that the 96 bitcoins are a form of money, like banknotes, and so they needn't be returned. Banknotes, coins, and other highly-liquid paper instruments have a very special legal status. If you unknowingly accept some banknotes from someone who just obtained them illegally (say via ransom or theft), the law can't compel you to give those banknotes back to the original victim. Money, as the great British jurist Lord Mansfield once declared, isn't like regular property: it "can not be recovered after it has passed into currency."

This special legal status (which I’ve written about before) was granted to banknotes centuries ago in order to ensure that these early forms of money remained highly liquid. If every merchant had to verify that the notes they were about to receive weren't stolen, the wheels of trade would have ground to a halt. Whether a modern judge would be willing to extend this sanctuary to cryptocurrency, and thus allow “persons unknown” to keep the 96 coins, remains to be seen. But I’m skeptical. 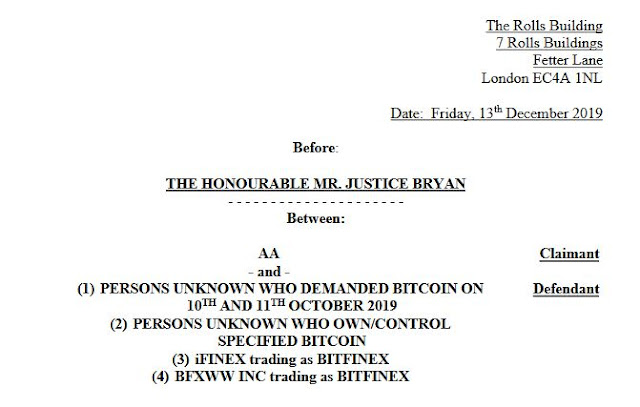 Another possibility is that the person (or company) that innocently accepted the 96 ransomed bitcoins and deposited them on Bitfinex has already sold them. If so, which party does the British insurance company have to pursue? Some entity (or group of entities) must now be in possession of the 96 bitcoins, right? Can’t the insurer just go after the next person down the chain?

I don't know the specifics about how an exchange like Bitfinex hold bitcoins for clients, but it may be very difficult to pinpoint who actually has title to those specific 96 bitcoins. When bitcoins are deposited at an exchange, they are sent to the exchange's hot wallet along with all other incoming bitcoin deposits. So the ransomed bitcoins would have been commingled with a bunch of clean bitcoins.

When the person who originally deposited the 96 bitcoins on Bitfinex put in an order to sell on the exchange's order book, the unsuspecting buyers (all of them Bitfinex customers) would now have a claim on various bitcoins held in Bitfinex's hot wallet. Are the bitcoins on which they have a claim necessarily the ransomed ones, and thus subject to the injunction? Or do the buyers just have a general claim on any random bitcoin held on their behalf by Bitfinex? If so, would that mean that Bitfinex itself is on the hook for paying the insurer 96 bitcoins?

Anyways, you can see how this all gets complicated very fast. A lot is riding on how thoroughly the history of unspent bitcoin outputs can be traced.

Given bitcoin traceability and the ease of getting an injunction, one can imagine that it might make sense for insurers, bitcoin exchanges, and over-the-counter traders to build some sort of private "ransom registry". The moment that an insurer pays a ransom to a hacker, that insurer simultaneously announces the offending address to the registry. A verified OTC trading desk can now protect itself from potential bankruptcy by always checking the registry to make sure that any bitcoins offered to it are "good" bitcoins. Exchanges too would likewise cross-check incoming bitcoin deposits against the registry.

This would be good news for potential ransom victims. With the exits for ransom payments being choked off, these sorts of exploits would become less feasible. Extortionists may simply stop trying to run their schemes.

You could also imagine hackers coming up with strategies for dissuading victims from posting transactions to the ransom registry. "If you announce the ransom payment to the registry, we'll leak your files to the public," or something along those lines.

Or maybe extortionists will simply start to use bitcoin mixers more. Mixers are services that allow people to commingle their bitcoins in order to preserve anonymity. Astonishingly, most ransom payments don't currently go through mixing services. According to Chainalysis, the company that was hired by the British insurer, around half of the addresses to which ransom is paid redirect the bitcoins to an exchange.

But even if hackers did use mixers, bitcoin exchanges may be reticent to accept incoming deposits. Binance, for instance, recently refused to make a payout to Wasabi, a wallet that automatically mixes bitcoins. Should exchanges like Bitfinex all refuse to accept bitcoins that have been mixed, that chokes off the ability to extort people using bitcoin as ransom.

For now, we don't know how the defendant’s responded to the injunction. But in any case, it makes for interesting speculation.
Posted by JP Koning at 1:23 PM