The best investment in the world

This post is about the best investment in the world. I won't leave you hanging. It's the U.S. "Series EE" savings bond.

But there's one corner of the U.S. government debt market where a a juicy 3.5% interest rate is still to be had: grandpa's savings bond. Snap it up quick, because it may not last.

Savings bonds have been around since 1935, when Franklin D. Roosevelt came up with the idea of getting regular folks to help fund new Depression-era programs. Savings bonds have always had low face values; investors don't need much money to get started. Each savings bond is part of a series, and each series has different features. This post is about one of those, the EE series.


On the face of it, the Series EE savings bond seems like an awful investment.

The government pays EE savings bond investors a paltry interest rate of 0.1% a year. Instead of getting interest payments in hand as you would a regular bond, the Series EE payments gets re-added to the bond every month. So no regular flows of income over time--you've got to wait years to get any return. (In bond-speak, it's a zero-coupon bond). To make matters even worse, the bond is non-marketable, meaning that it can't be resold. Once you own it, you're stuck with it.

But there's a odd feature that turns this bond from dud into stud. Here it is:

What this fine-print says is that the government guarantees that the Series EE will double in value in 20 years.

If you do the math, this works out to an incredible 3.5% yield. As I pointed out earlier, the regular 20-year government bond only yields 0.98%. So anyone who buys an EE savings bond is making over three times the market rate! It's not often you get a gift like this. Check out the chart below: 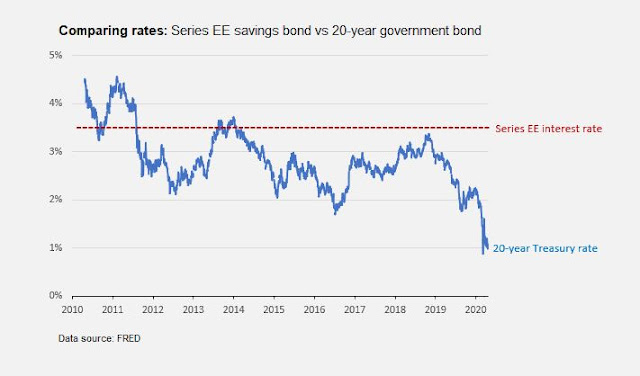 There are some catches. To earn this 3.5% return, you have to hold the thing for twenty years. No backing out! This sort of commitment isn't for everyone. Who might these terms appeal to? If you're 30 or 40 and planning to retire by holding a government bond ETF for 20 to 30 years anyways, you might want to switch into savings bonds. Or, if you're a grandparent or parent and want to gift a baby some funds for college, an EE savings bond is a great option. (They can earn interest tax-free for  education purposes.)

The other catch? The limit is $10,000 per year per social insurance number. So unlike most fancy arbitrage trades, this isn't meant for all of you fat cats out there. It's for regular Americans. Which is why I like it.

(I suppose a hedge fund manager could rig up system that evades these rules. This would involve gifting $10,000 to hundreds of straw men, using their identities to invest in savings bonds and harvest the 3.5% rate. But this seems like it might not be worth the cost.)

Hurry up. You have till April 30, 2020 to buy the current crop of  EE savings bonds. There's a chance that after April 30 the U.S. government will reduce the 3.5% interest rate on subsequent versions of the EE bond. The government would do so by replacing the guarantee to double the bond's value after 20-years with a 25-year, or 30-year, guarantee.

It's made this change to the doubling period before. Up until 2003, the government guaranteed that an EE bond would double in 17 years. But that year it changed the terms so that subsequent issues would require 20 years to double. (It doesn't make changes retroactively. So if you already own a bond, you needn't worry).

Given such a sweet deal, you'd think that EE savings bonds would be flying off the shelves. Not so. Below is a chart of showing the dollar value of EE bonds issued going back to 1999. 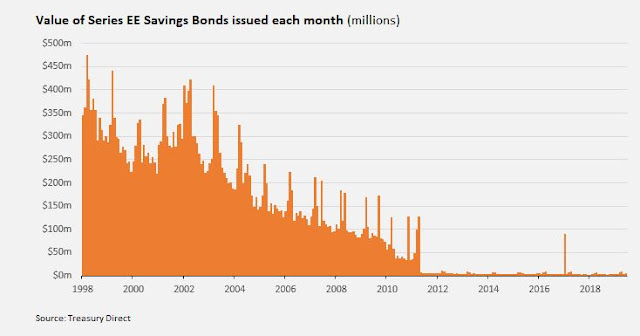 In March 2020, the U.S. government issued just $5.2 million in Series EE savings bonds. That's hardly anything! Back in 1998, it was issuing a cool half a billion dollars worth of EEs each month. (The big drop in 2011 is when the government stopped printing paper savings bonds. Conveniently, they could be bought at the post office. The government now only issues them in electronic format.) 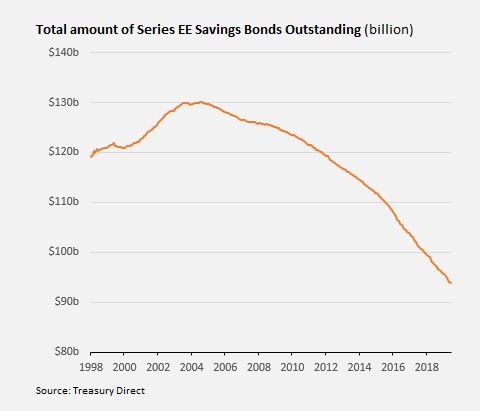 The tiny trickle of new EE bonds being issued could be good news for today's investor. It might mean that an alteration to the crazy high interest rates (i.e. the 20-year doubling period)  is not on the government's radar screen. So if you buy $10,000 before April 30, you could be able to reload and get another $10,000 next year.

Why is no one interested in buying EE Savings bonds?

I'm only speculating here, but I feel that the population's general understanding of bonds is on the decline. Today's bond investor buys government bonds packaged up in the form of an exchange traded fund, or ETF. These are available on the stock market. Not so in the old days. People had to purchase bonds individually through their broker. And this process encouraged them to be somewhat attuned to the principals of a bond. Or they had to open an account at Treasury Direct, the government's investor portal, and make the purchase themselves. That's a very hands-on way to invest in bonds, and obliges people to learn about bond fundamentals. Or they could buy a paper savings bond at the post office, a route that has been closed.

Bond ETFs provide a relatively hands-off way to buy and sell government bonds. No need to understand how a bond actually works. And so today's investor has mostly forgotten what a savings bonds is. "It's that strange thing grandpa buys." Or "RobinHood doesn't offer it."

Compounding matters is the fact the the EE's magic 20-year doubling number (which is what gives it its kick) is buried under a miserable advertised interest rate of just 0.1%. You've got to be one of those folks who enjoys combing through the fine print to catch it.

So if you're already a committed government bond holder, consider making the switch to Series EE savings bonds, folks!
Posted by JP Koning at 9:13 AM