Is fiat money to blame for the Iraq war, police brutality, and the war on drugs?

I often encounter memes claiming that fiat money is to blame for all sorts of government evils. Here is one example from Kraken bitcoin strategist spokesperson & bitcoin meme factory Pierre Rochard:


The rough idea behind this family of memes is that the Federal Reserve, the world's largest producer of "fiat" money (i.e. irredeemable banknotes), is responsible for financing all sorts of examples of government over-reach, say foreign invasions, police brutality, and the twin wars on terrorism and drugs. It does so by producing seigniorage, or profit, which it passes on to the state. Replace fiat-issuing central banks like the Fed with bitcoin or a gold standard, and seigniorage would cease to exist. With the government's purse strings having been cut, a relatively peaceful society would be the result.

This meme's premise is wrong. In practice, central bank seigniorage in both the U.S. and other developed nations is a very small part of overall  government revenues. And so even if fiat money were to be displaced, say by bitcoin or a gold standard, it wouldn't change the state's ability to fund the war on drugs and adventures in the Middle East.

You may be wondering how the Fed generated $53 billion in profit, or seigniorage, in 2019. Most of this income comes from issuing banknotes, or cash. For each $1 in banknotes that it issues to the public, the Fed holds an associated $1 of bonds in its vault. These bond have typically yielded 3-4% in interest. But the Fed only pays 0% interest to the owners of its banknotes. Which means that it gets to keep the entire 3-4% flow of bond interest for itself. It forwards this income to the Federal government at the end of the year.*

Seigniorage tends to grow over time. (But not always. Below I'll show how Sweden's seigniorage has been shrinking). The larger the quantity of banknotes that the public wants to own, the more interest-yielding bonds the Fed gets to hold, which means more seigniorage. In general, banknote demand increases with economic and population growth.

Interest rates are another big driver of seigniorage. If bond interest rates rise from 4% to 8%, the Fed earns more on the bonds it owns in its vault. Banknotes continue to yield 0% throughout, so the Fed keeps the entire windfall for itself (and ultimately for the Federal government).

US seigniorage is relatively small. In addition to enjoying revenues from the Federal Reserve, the U.S. Federal government also gets money from individual and corporate income taxes, social insurance and retirement receipts, excise taxes, duties, and more. Below I've charted the relative sizes of these contributions.

As you can see, the Fed's contribution (the grey line) is a rounding error.

Below is a chart showing what percentage of total government revenue is derived from the Fed. 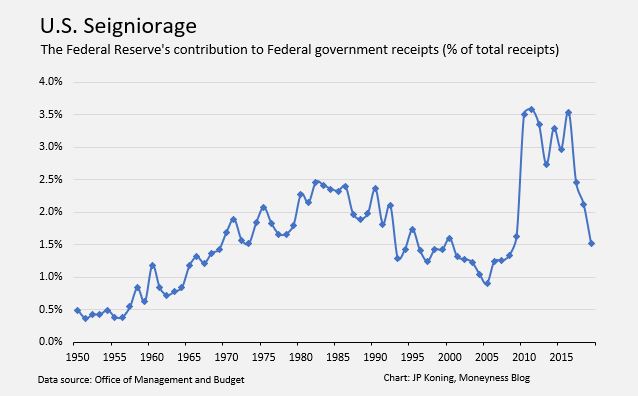 In 2019 the Fed contributed just 1.5% of total U.S. Federal government receipts. This contribution has hovered between 1% to 3% over the last four decades. So the meme that fiat money abetted the Iraq War, the expansion of the police state, or the U.S.'s military industrial complex is mostly hyperbole.

What about other developed nations?

The Bank of Canada provided $1.2 billion in earnings to the Canadian Federal government in 2018. But the Federal government took in $313 billion in revenues that year, which means that the Bank contributed a tiny 0.4% fraction of total revenues. The reason for the big gap between the Bank of Canada's tiny 0.4% contribution and the Fed's 1.5% contribution is the global popularity of the US$100 bill. Canadian cash doesn't enjoy a big foreign market.

I mentioned Sweden earlier. Below is a chart of seigniorage earned by the Swedish central bank, the Riksbank.


Sweden is one of the only countries in the world where banknote ownership has been falling. This de-cashification is compounded by interest rates that have fallen close to 0%. Which means that the Riksbank's bond portfolio isn't earning as much as it used to. This combination has just decimated the Riksbank's seigniorage. In 2018 its seigniorage amounted to a paltry SEK 267 million (US$29 million). This is just 0.00003% of all Swedish central government receipts.

So in sum, central banks in places like the US, Canada, and Sweden are not a big source of government funding. If you want to stop governments from engaging in bad policies like the war on terror, the war on drugs, and foreign meddling, you've got to work within the system. Vote, send letters, go to protests. Sorry, but buying bitcoin or gold in the hope that it somehow defunds these activities by displacing the Fed is not a legitimate form of protest. It's a cop-out.


P.S. By the way, I am not saying that control of the nation's money supply hasn't been used to finance wars in the past. Obviously it has. Greenbacks helped pay for the Union's war against the Confederates. Henry VIII paid for his wars by dramatically reducing the supply of silver in the English coinage.

*The Fed enjoyed a big spike in seigniorage after the 2008 credit crisis. This is because it issued a bunch of deposits to bank (known as reserves) via quantitative easing. The Fed only had to pay 0.25% interest on these reserves, but the bonds that backed them were earning 2-3%. This QE-related income has declined as the Fed has unwound QE (since reversed) and long-term interest rates have declined.
Posted by JP Koning at 7:23 AM