Why are so many Americans content to be unbanked?

For us non-Americans looking in, these numbers are very strange. I live in Canada, and bank accounts are pretty much universal here. If you don't have one, you'd probably be quite interested in getting one. Ditto for other developed nations such as Australia, Japan, Sweden, France, and Germany. The banked rate in these countries lies between 99%-100%, much higher than the U.S.'s 94.4%.

In this post I want to try and figure out why there are so many U.S. households without bank accounts, and why so many of them seem uninterested in having one. Lucky for us, the Federal Deposit Insurance Corporation's (FDIC) biannual national survey of bank account usage provides a ton of data on the topic.

Two major reasons for being unbanked

According to FDIC, the most popular reason cited by unbanked households for not having a bank account is don't have enough money to meet minimum balance requirements. 48.9% of all unbanked respondents chose this option. What this indicates is that banks are setting standards that many Americans simply cannot meet, particularly poor households (FDIC data shows that 23.3% of families with income below $15,000 are unbanked compared to an American average of 5.4%). Perhaps the unbanked are "not at all interested" in getting an account because they're tired of being rebuffed.

The second most popular reason that the unbanked give for not having a bank account is don't trust banks at 36.3%. The 2019 survey doesn't provide much colour on what this means. Do unbanked households not trust banks because of surprise fees? Are there cultural explanations?

Luckily, there is a bit more detail on trust in FDIC's 2011 survey. When FDIC statisticians queried those who said they didn't trust banks for follow up reasons, 60% said that they simply didn't trust banks, 20% said banks do not feel welcoming, and another 4% said there were language barriers. This clarifies things a bit, but again the vague notion of trust dominates.

In 2016 FDIC conducted a series of interviews with bank, nonprofits, counselors and consumers in an effort to better understand the lack of trust among the unbanked. Describing the barriers to trust, a bank executive mentioned "a narrative that is built up within [their] mind." Another executive listed a reputation for "trying to pull one on over me." One counselor brought up "uncertainty about the security of funds" and another said "they’re often paranoid about [banks] ... They just think that the bank is a bad institution, and they want to stay away from it... Often, it’s just a lack of knowledge or just like they don’t understand it, so they just stay away."

This last comment is especially interesting. Do people not trust banks for the same reason that they don't trust vaccines, the veracity of the moon landing, or accounts of Elvis's death? Banking, after all, is complex. It's a bit of a black box. And so the public writes its own mythologies about banks. It may be that some of these mythologies prevent people from getting a bank account.

Does FDIC data confirm this hypothesis?

I think it does. The U.S. economy has steadily improved since 2011. At the same time, banks are getting more accessible. According to Bankrate, a company that gathers data about consumer finance products, minimum balance requirements on checking accounts are at six-year lows. Half of all checking accounts are considered free, the highest percentage since 2010. 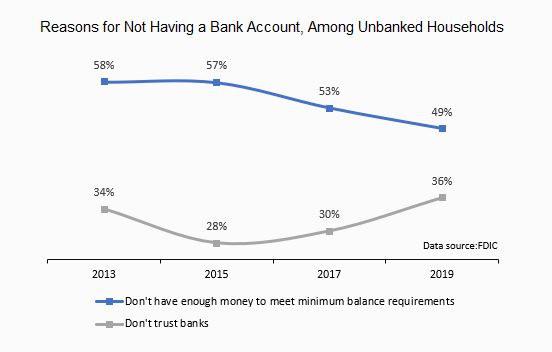 We'd expect bank account openings to be especially marked among poor Americans, since they are more likely to be constrained by minimum balance requirements than middle-class Americans. And that's what FDIC data shows. The unbanked rate for those with less than $15,000 in annual income has improved from 28.2% in 2011 to 23.3% in 2019. The unbanked rates of other vulnerable demographics have improved as well:

Not bad. Take a look at the reduction in unbanked rates among economically-disadvantaged demographics from 2011-2019. U.S. banks aren't getting enough credit for this. pic.twitter.com/lAjdVAzU8e 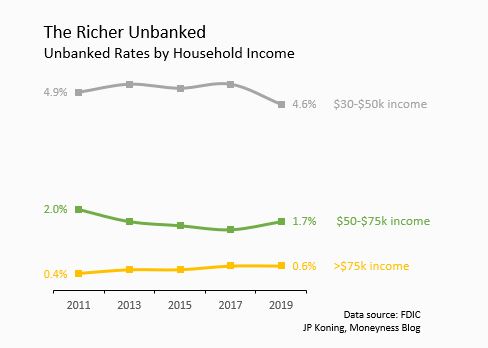 What explains the historical stability of unbanked rates among the richer unbanked? Given higher incomes, concerns about minimum account balance requirements may be less important than concerns about trust. And thus the unbanked rate among these groups is unlikely to be affected by improvements in the broader economy.

Perhaps one day all American households that were unbanked for economic reasons will have bank accounts. The only remaining unbanked would be those households who are philosophically unbanked. Subsequent improvements in the economy or bank accessibility would have no affect on their banking decisions.

How big might this core group of bank skeptics be?

Say that bank skepticism lies in the same bucket as Elvis belief and moon landing conspiracies. We know that belief in conspiracy theories is not equally distributed across income groups. Low-income people are more likely to believe that there is some evil actor pulling on the strings, and so they may be more prone to be bank skeptics. We already know that the unbanked rate among households who make $30,000 to $50,000 has stabilized at around 5%. It hovers around 1.5 to 2% among households making $50,000 to $75,000. For those earning less than $15,000, will the unbanked rate eventually stabilize at 7.5%? 10%?

So while America's overall banked rate will continue to improve from 94.4%, there may be a good chance that it peaks-out at some permanent plateau significantly below 100%. In Canada the banked rate lies somewhere between 99% and 100%. I'd guess that the US peaks below that, say at 97% or 98%. Canadians like a good conspiracy theory, but we are much less conspiracy theory-prone than Americans. If a culture of anti-bank mythologizing draws from the same source as conspiracy theorizing, we can assume that Americans are more likely to be prone to bank skepticism than Canadians.

What does all this have to say about policy surrounding the unbanked?

The plight of the unbanked has been used to justify all sorts of government fixes: a Federal Reserve-issued digital currency, FedAccounts, postal banking, a USPS prepaid card, and a public Venmo. At the core of all these projects is the idea that unbanked Americans are unbanked because of excessive fees and high minimum account balance requirements. And that theory may be right, to a degree.

But none of these projects tries to account for people who may be unbanked for the same reason they don't want to be vaccinated, or because they believe in QAnon. One of the motivating ideas behind FedAccounts, for instance, is to have the Federal Reserve provide a public option for the unbanked. But it could be that folks who are philosophically opposed to banks will also be intolerant of an account at the FED. God know the U.S. is rife with central banking conspiracy theories.

This may be one reason why places like Walmart are the best option for reaching the unbanked. Walmart isn't a bank, so it can attract bank skeptics. And it has the financial heft to offer those on a low income a set of well-priced banking products via its Walmart MoneyCenters (which offer check cashing, bill pay, and money orders) and its prepaid debit card, the MoneyCard. Many of the 5.4% of the population that FDIC categorizes as unbanked are happily getting financial services at Walmart. They aren't really unbanked; they are differently banked.

If not the Fed, perhaps the United States Postal Office is the right institution for reaching the philosophically unbanked. The USPS is not a bank. And according to Morning Consult, the post office is the most trusted brand in America. When asked how much do you trust each brand to do what is right? 42% of Americans responded that they trusted the USPS "a lot." And so people who bristle at the idea of keeping a Chase debit card in their wallet may very well be proud owners of a USPS card.

P.S.: In a recent article for AIER Sound Money Project, I wrote about postal banking. But rather than advocating branch banking I suggested a USPS prepaid debit card/mobile app. Branch banking is in long-term decline. Below is a chart showing how branch visits have fallen across all demographics from 2017 to 2019:

Also, note the differences between demographics. Older people, whites, and those without a high school diploma visit more often than the rich, blacks, and young folks. But everyone is visiting less. pic.twitter.com/P7dyVSvINl

Much of this decline in branch visits is due to the huge popularity of mobile banking. Keep in mind, however, that low income people are more likely to rely on branch visits for their primary method of accessing bank services than high income people, as the chart below illustrates: 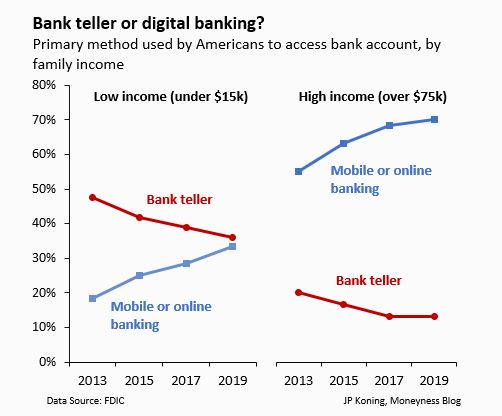 Even so, I question the wisdom of investing billions of dollars to convert 30,000+ USPS branches into full service banks when a single digital bank with an app & debit card will do. Yes, USPS branch banks would have been useful in 2017 or 2019, especially for low-income people and the elderly. But branch banking is a long-term investment, one with a payback period measured in decades. And I suspect that by 2025 or 2027 it will be uncommon for people of all income groups to visit their branch for teller services.