My recent article on Tether, a stablecoin, was just published at Coindesk. In the article I commented on Tether's recent settlement with the New York Attorney General's office. Because the settlement forces Tether to adopt a bunch of new practices, I think it's a win for stablecoin consumers.

Why have I been focusing so much of my time on Tether stablecoins? Diligent readers will recall I wrote about it twice last month. (1 | 2 ).

First, I've been writing about stablecoins for a long time now, and Tether has always been the biggest of the bunch. So it merits our attention. But it isn't just the biggest stablecoin. These days it's also becoming big by regular fintech standards. According to its website, Tether recently passed $35 billion in deposits, ranking it above PayPal's $34 billion. Which means that by my estimates it is now the largest U.S. dollar non-bank payments platform in the world ranked by customer funds.

Does that make Tether the largest fintech in the world ranked by US$ customer balances held?


Tether imprints dollars onto a blockchain. PayPal registers dollars in a centralized database. But apart from that, they're technically the same beast. Both keep some dollars (or not) on deposit with their banker and then issue dollar IOUs to their customers. And customers can in turn use these IOUs to make payments amongst each other.

The second reason I've been writing about Tether is that it is dubious. As I wrote here, it avoids U.S. money transmitter regulation by locating itself offshore. And it has somehow managed to wrest first spot away from PayPal despite doing very dangerous things with its customers' funds.

Its impropriety is a matter of public record. Even before last month's settlement with the New York Attorney General we already knew that, among other things, the firm had invested millions of dollars of customer money in a fraudulent third-party payments processor, all the while informing users that Tethers were backed by dollars "safely deposited in our bank accounts." If you want to get into this in more detail, Bennett Tomlin has been exploring these things in far more detail than I.

I am fascinated by this strange combination of popularity and sketchiness. And I'm not the only one. Tether analysis is a growing sub-field of cryptocurrency analysis.

Tether is imbued with an aura of Trumpian invincibility. Hey, look at all these bad things we do. But we're getting away with it. The market keeps buying. We're bigger than PayPal! Tether's success makes outside observers wonder whether up is down, or bad is actually good.

But I want to dispel some of this seeming invincibility.

As I suggested in my Coindesk article, much of Tether's stablecoin dominance is probably due to network effects. That is, Tether was the first stablecoin to market, and so a Tether standard of sorts emerged. Like any standard, once everyone plugs into it it's hard to move away to a better standard. New and safer stablecoins—ones that have been licensed under a financial regulatory framework—have certainly emerged, including Paxos Standard, TrueUSD, Gemini Dollar, Binance USD, and USD Coin. But Tether enjoyed a four-year head-start, and so even if it murdered someone in the middle of 5th Avenue it would still be the leading stablecoin.

For instance, Tether is the only stablecoin that doesn't provide regular attestations.

Among stablecoins, attestations have become industry standard. An independent accountant is engaged to verify that the stablecoin has the reserves that it claims, according to an accepted standard for carrying out attestations. See table below. ⬇️

Why doesn't Tether make an effort to adopt an industry-wide practice? It could be that it is just too sketchy to be able to hire an accounting firm to provide attestations. Alternatively, maybe its position as the standard stablecoin means it needn't bother. It gets to coast while everyone else has to peddle.

But if it's difficult to move away from a given standard, its not impossible. The first example that pops to mind is how the international monetary system was on a British sterling standard in the 1800s, but now we use U.S. dollars. Somehow sterling dominance evaporated. The same can happen with Tether's dominance.

In fact, I'd argue that we're already seeing a movement away from the Tether standard, particularly in decentralized finance, the set of financial protocols established on the Ethereum network.

It's hard to underestimate how much decentralized finance, or DeFi, dislikes Tether. Consider the biggest DeFi lending platforms, Compound and Aave. Both platforms allow USD Coin stablecoins to serve as collateral. (USD Coin is the second largest stablecoin). But these platforms say no to Tether. That is, if you want to get a loan from Compound or Aave, you can't use your stash of Tether as security. As I pointed out in my article, Compound's decision is based on reports that Tether is “undercollateralized” and has the “potential to collapse at any time.”

MakerDAO, a combined stablecoin/lending protocol and one of the top-three DeFi tools, has also adopted a say-no-to-Tether policy . It sets a hawkish 8% borrowing rate and 150% collateralization ratio on anyone who wants to take out a Tether-backed loan. That may sound like gibberish, so let me translate. For a $100 loan from Maker you've got to lock-up a hefty $150 in Tethers. You'll pay 8% in interest each year on the loan.

But if you want to take out a USD Coin-backed loan (remember, USD Coin is one of the newer safer coins), Maker's terms are far more dovish. It'll cost 0% and 101%. So to get a $100 loan, you need only provide $101 in USD Coin. And the interest costs is nil.

Given Maker's policy, there's absolutely no reason why you'd take out a Tether-backed loan rather than a USD Coin one. And that's why to this day Maker has a measly $700 in Tether sitting in its smart contracts versus a massive $700,000,000 in USD Coin. Below is an abridged list of collateral that has been deposited in Maker as security. The top red circle highlights how much USD Coin (USDC), that it holds. And the bottom circle indicates its Tether (USDT) holdings.

It's worthwhile to revisit the policy meetings where Maker originally established its Tether policy. Citing Tether's "history of opaqueness and fractional reserve," administrators recommended conservative parameters in order to "protect Maker." At the same time, looser parameters were suggested for Paxos Standard stablecoins because it was "significantly more transparent."

In another discussion, Maker community members disapprovingly cited a tweet in which Stuart Hoegner, Tether's lawyer, jokes about Tether's approach to safeguarding customer funds. I've screenshotted it below.

Maker voters went on to approve a stringent approach to policing Tether, and rightly so given Tether's cavalier approach to managing customer funds. Defi grew exponentially in 2020. So did Maker. But almost all of its thirst for stablecoins was directed into non-Tether stablecoins. That's why there's still just $700 in Tether in Maker.

A back-of-the envelope calculation reveals how much money Tether may have missed out on. Had Tether taken pains to become safer to consumers, say by providing regular attestations and/or applying for a money transmitter license (like USD Coin and other competitors have done), it might have around $300 million Tethers sitting in Maker right now. Assuming that it invested this extra $300 million at an interest rate of 1%, Tether would be earning $3 million more each a year.

And that's just one platform. Do the same for Compound, Aave, and more, and Tether's reputation has cost it tens of millions of dollars in profit.

Below I've charted out the ratio of the total value of all Tether stablecoins in existence to the total value of all USD Coins.The Tether-to-USDC ratio typically registered around 10 Tethers to each USDC through 2019 and early 2020, but this month it fell below 4 for the first time. USD Coin is steadily catching up to Tether for the title of largest stablecoin. 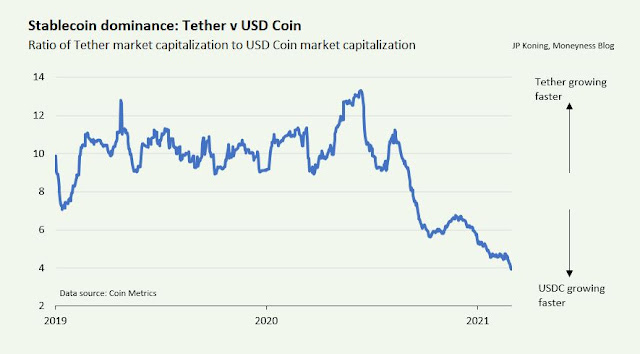 We all like the idea of justice. If you shoot someone in the middle of 5th Avenue, people should be appalled. In the case of a financial company, if you manage your customers' funds in a reckless manner and avoid informing them about the mistakes you made (and then joke about it after), then the market should discipline you, not reward you.

In the case of Tether, that is happening. As the chart above illustrates, Tether's poor stewardship of customer funds means that it is inexorably being replaced by safer stablecoins. Gresham's law, the adage that bad money pushes out good money, does not apply. The good is slowly pushing out the bad.
Posted by JP Koning at 7:15 AM