A bronze currency in ancient Europe?


1) Last month I wrote about hacksilver currency in the ancient Middle East. This month I thought I'd share some fascinating archaeological research exploring what Europeans may have used as money during the Bronze Age.

2) By Bronze Age Europe, what is generally meant is the period beginning with the first appearance of bronze, a product of copper and tin, in southern Europe around 3000 BC and spreading north into the rest of Europe. It lasted till the introduction of iron between 1000 BC - 600 BC, depending on the region.

3) Did Bronze Age Europeans develop the idea of using metal as a common medium of exchange? There's a big hurdle to answering this question. Europe lacks textual evidence.

4) This isn't a problem in the Middle East. Thanks to the survival of "texts" such as cuneiform tablets, it is commonly accepted among archaeologists that hacksilver, or bits of cut up silver, circulated as a medium of exchange in the Near Middle East (i.e. Turkey, Israel, Iraq, Egypt, Iran). Europe, by contrast, hadn't yet developed written language -- that wouldn't come till around 500 BC. And so archaeologists don't have textual evidence that they can use to get hints about what Europeans used (or not) as money during the Bronze Age.

5) One curiosity from Bronze Age Europe is why cut up pieces of bronze are habitually found at dig sites all over Europe. Here is a picture of a bronze hoard found in France that I screenshotted from a paper by Dirk Brandherm (2018). 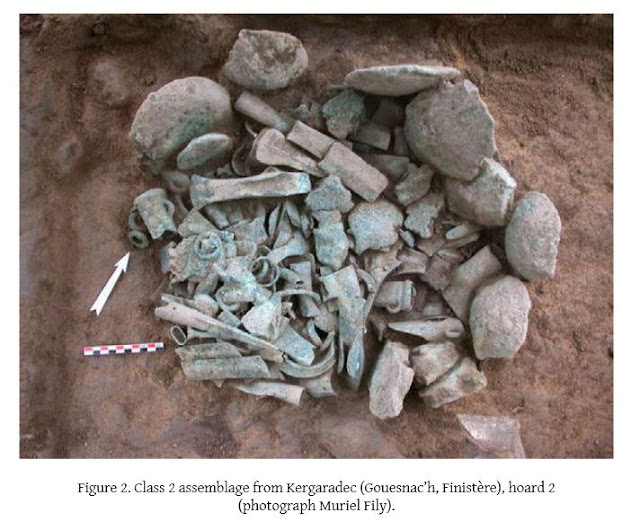 6) Europeans liked their bronze fragments. As time passed, evidence from hoards shows that more and more bronze was used in Europe. And the proportion of bronze being subject to fragmentation increased over time as well.

7) Archaeologists have long speculated why Europeans cut bronze into pieces. One theory is the owners of the bronze intentionally did so just prior to burial for religious reasons. Brandherm (2018) goes into this theory in some detail. Breaking up bronze may have been part of a ritual of "killing" objects perceived as being animate beings. These bronze fragments may have been intended for use in the afterlife or as votive offerings.

If bronze was purposefully broken up, there should be a discernible pattern in the weight and/or length of pieces making up individual hoards. For instance, one hoard might have a lot of smaller fragments, and another larger ones. That would demonstrate intentionality. However, the characteristics of bronze hoards (Wiseman studied British ones) shows that they can be best modeled as if they had each been accumulated randomly.

9) According to Wiseman, Europe's bronze hoards are best thought of as personal stashes of bronze haphazardly assembled from already-circulating bronze fragments. These bronze hoards were probably only meant to be buried for a few weeks or months. Instead they ended up being forgotten or lost.

10) Which gets us to our next theory for Europe's bronze fragments. If the bronze was not fragmented just prior to burial for religious reasons, but while it was still in circulation, might it have been fragmented for commercial reasons? More specifically, was bronze a form of currency?

11) In a recent paper, Nicola Ialongo and Giancarlo Lago provide what they believe could be evidence for the currency theory. Through a careful statistical analysis, the two archaeologists have found a relationship between bronze fragments and balance weights used by ancient Europeans to measure mass. They believe that this compliance of bronze pieces to a system of weights and measures is a good indication that bronze fragments were used as currency.

12) The technology for weighing things -- balance weights and bone/antler balance beams -- arrived in Southern Italy in Early Bronze Age (2300 to 1700 BC) and by 800 BC had been adopted all across Europe.

13) In an earlier paper published in 2018, Ialongo teamed up with Lorenz Rahmstorf to analyze around 500 stone and bronze balance weights found all across Europe. They find that these balance weights tend to form a sequence, illustrated below in a frequency distribution chart.

It's pleasing to see this regularity, because it's what you'd expect of weights -- a degree of standardization.

15) Below is a chart that illustrates this statistical relationship.

(The archaeologists have used a tool called cosine quantogram analysis to pin down this relationship. If you are interested in the details of this process, please refer to their papers. But to understand what this chart is saying, read on.)

Likewise, the chart says that weights were unlikely to clock in at a weight of, say, 6 grams, or some multiple of 6 grams (like 12 grams, 18 grams, 60 grams etc). There is no bell-shaped concentration on the chart at 6 grams.

17) Ialongo and Luca describe this regularity as evidence of a pan-European weight unit, a shekel, of about 9.4 grams to 10.2 grams, the same unit Ialongo pinpointed with Rahmstorf a few years before.

I don't know about you, but I find this three thousand year-old regularity remarkable. Both the fact that it existed and that we teased it out so many years later.

19) Why might bronze have been fragmented in a way that seems to comply with the 9.4 gram European shekel?

Presumably if bronze pieces were being used as a medium of exchange, then it would be convenient for those engaged in trade if those pieces were broken up into standardized 9.6 gram chunks (and its increments such as 19.2, etc). The possession of multiple cleanly cut pieces would have sped up the process of exchange, sort of like how having five $1 dollar bills and three $5 bills in your wallet is more convenient than having just one $20 bill. Having many denominations allows one to cleanly reach a wider number of amounts, buy more things, and transact with more people.

20) I don't think this quite gets us over the line to currency, though.

Bronze could have simply been a popular commodity at the time, not a medium of exchange. But why did bronze fragments comply with the weight system if there was nothing monetary about them? Because it was convenient. Even if bronze was just a commodity, cutting it up in a standardized way would have simplified the process of trading it.

21) Ialongo and Lago don't stop there, though. They turn to the Middle East for an analogy. Evidence shows that hacksilver (bits of broken up silver) found at Ebla, a dig site located in modern day Syria, complied with balance weights found all over the Near Middle East. In a 2018 paper with Luca Peyronel and Agnese Vacca, Ialongo illustrates this relationship with a chart.

Both the balance weights (in non-green colours) and the hacksilver (in green) tend to accumulate at regular intervals such as 8.36 grams, 16.58, grams (which is 2 x 8.36), 82.77 (which is 10 x 8.36) etc. This makes sense, since archaeologists have long believed that ancient Mesopotamia used a standard weight unit of 8.4 grams

22) To continue with Ialongo and Luca's analogy...

The statistical relationship between metal fragments and balance weights that we see in Bronze Age Europe is very much the same as the one we see see in Middle East. But in the Middle East we have textual evidence that hacksilver was a popular medium of exchange. Europe lacks textual evidence. Given that we know that hacksilver was a form of currency in the Middle East, and said currency aligned to a system of weights, could that mean that the alignment of bronze fragments to a system of weights in Europe indicates that bronze was also a type of currency?

23) It's a provocative argument. Ialongo and Luca's paper is still new, so it'll be interesting to see what their peers have to say.

24) Even if you don't buy the currency argument, it's still neat to see how bronze pieces all over Europe were being fragmented according to the same European weight standard. It implies that Europeans weren't primitive and isolated. They were engaged in continental commercial trade with each other, and were connected enough to merit the development of standardized systems of weights and measures.

Email ThisBlogThis!Share to TwitterShare to FacebookShare to Pinterest
Labels: medium of exchange