Over the last five years Yemen has stumbled into a unique monetary situation. I initially wrote about Yemen's odd currency status two years ago. Here is a quick update.

In brief, Yemen has split into two warring sides: the Houthi rebels in the North and the Saudi-backed government in the South. This split has also torn the nation's central bank into two branches – the Aden branch and the Sana branch.

Likewise, it has separated Yemen's stock of Yemeni rial banknotes into two different types of banknotes. The Houthi rebels in the North (who run the Sana branch of the central bank) have adopted rial banknotes printed before 2016. The officially-recognized Aden regime in the South controls all notes printed after 2016. (Read the original blog post for the full story.)

As a rule banknotes of different vintages, or years, are equal to each other. Put differently, cash is fungible. But not in Yemen. The value of the North's pre-2016 notes and the South's post-2016 notes began to diverge in 2019. Below is a chart published by the Cash Consortium of Yemen (which I've modified for clarity) showing how far that divergence has preceded. The value of rebel's old notes relative to the U.S. dollar has stayed stable at around 600 rials to US$1 (see red line). But the value of the official Aden government's post-2016 notes has inflated. A new rial is now worth less than half a pre-2016 note (green line). 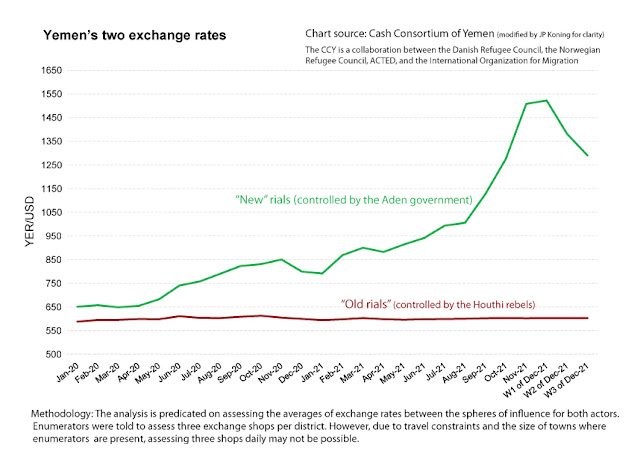 The reason for this growing gap is that the rebel North can't increase the supply of pre-2016 notes. The supply of old notes is locked. The supply of new notes, however, is not fixed. The South has been printing up new paper money and spending it into circulation.

It would be as if the northern & southern U.S. states had a civil war, the North adopting pre-2016 Federal Reserve notes and the South post-2016 notes. The South keeps printing new notes to finance itself, but the North is stuck with a fixed stock of notes. So the U.S. dollar bifurcates.

A currency war of sorts developed last summer in Yemen. It began with the Aden government printing up new notes of the same size, shape, and appearance as the rebel's pre-2016 notes and then spending them. You can see why the Aden government would want to adopt this strategy. If it could spend the replica notes at the same purchasing power as old notes, which are more valuable, the Aden government would extract twice as much goods & services than it otherwise could. If Aden's replicas succeeded in filtering into the Northern economy, we'd expect the old notes—so stable till now—to finally succumb to price inflation. The price gap between old notes and new notes would collapse.

The exchange rates illustrated in the chart above suggest that the North's efforts to filter out the replicas was successful. The Northern rial notes are still worth just as much as before, around 600 rials to the U.S. dollar. Meanwhile, Aden's notes have inflated dramatically, from around 950 rials to 1290 rials per US$1.

My hunch is that some of the rebel's success may be due to the relative quality of the North's banknotes. Given years of active use, Northern rial notes must be relatively filthy right now. Crisp new notes from the South would immediately stand out. After Aden's new notes have circulated for a few years, it may become easier for them to pass as the rebel's old notes. Only then will the price gap start to shrink.
Posted by JP Koning at 7:41 AM