Where are the customers' rate increases?

U.S. banks are at it again. Inflation is at its highest level in decades. At the same time, interest rates on deposits at the Fed, Treasury bills, bonds and mortgages are rising rapidly to compensate. Yet banks are still in a holding pattern when it comes to the interest rates they pay to customers on savings accounts, certificates of deposit (CDs), and interest-checking accounts. 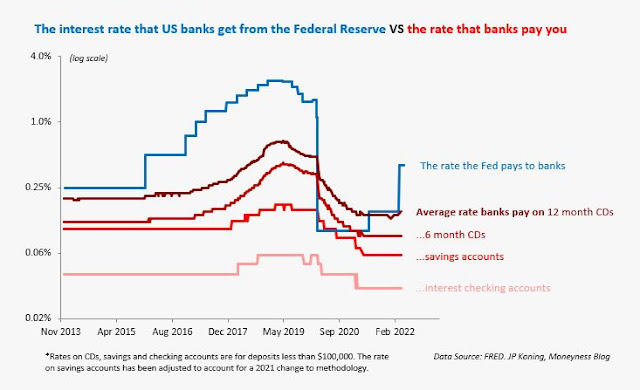 Historically, rates on CDs seem a little more responsive. But they're still sluggish. The average 6-month CD still only yields a scrawny 0.09%, whereas the yield on a 6-month Treasury bill is now at 1.4%.

This stickiness wouldn't be such a big deal if banks were also slow to reduce interest rates on customers' accounts – win some, lose some, right? But take a look at what happened when the Fed began to cut rates in mid-2019. Banks didn't hold off. They immediately started to pass lower rates on to their customers, and only became more aggressive when COVID hit in March 2020.

So for bank depositors, it's all lose. U.S. banks are slow to increase rates on checking accounts, CDs, and savings accounts, but quick to reduce them. I wrote about this sad lack of symmetry back in 2020. Do go back and read it.

This observation isn't something that economists have ignored. In a paper entitled "Sticky Deposits", Federal Reserve economists John Driscoll & Ruth Judson found that rates are "downwards-flexible and upwards-sticky." This stickiness has consequences for regular Americans. If rate stickiness didn't exist, the authors estimate that U.S. depositors would have received as much as $100 billion more in interest per year!
JP Koning at 5:17 PM
Share