A quick note on Tether redemptions during the current crypto bloodbath

The stablecoin market is currently weathering a crypto bloodbath, with some stablecoins doing a better job of holding their pegs than others. One odd thing I've noticed is that the supply of Tether stablecoins, by far the largest stablecoin, doesn't seem to be contracting. Tether's Ethereum address indicates that there are 39.8 billion Tethers outstanding, the same as in December 2021.

The situation at Tether's main competitor, USD Coin, suggests that this shouldn't be so. The supply of USD Coins is shrinking rapidly. There were around 48 billion USD Coins in existence (on Ethereum) in late February, at its peak. Now there are just 42.8 billion. That's an 11% contraction.

To get a better idea for how the supplies of the two stablecoins are acting differently, check out the chart below. USD Coin (USDC) is the green line and Tether (USDT) is the red line. (Note: this is the amount outstanding on the Ethereum blockchain. Both stablecoins also exist on other blockchains). 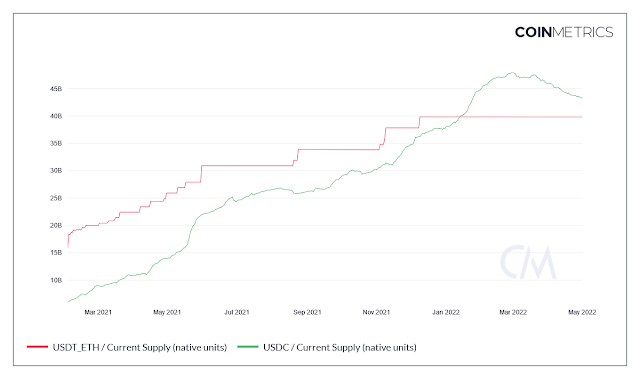 USD Coin's contraction is consistent with a crypto recession. People want to get the hell out of the cryptoeconomy. They're hurting and they're scared. To support a lower level of crypto speculation, the market doesn't require as much stablecoins as before. So USD Coin has to shrink to accommodate this reduction in demand. That's normal.

But the implication is that Tether should also be contracting. After all, it's not exempt from the broad forces hitting USD Coin. There shouldn't still be the same 39.8 billion Tethers circulating in what is now a much smaller crypto economy.

What I'm guessing may explain some of this divergence is different redemption policies among stablecoin issuers. When Circle, the issuer of USD Coin, redeems USD Coins with U.S. dollars, it simultaneously destroys those coins. And so any redemption directly reduces the total quantity of USD Coins in existence. It may be that Tether doesn't actually destroy the Tethers that it redeems. It first confines them to its treasury wallet. And so redemption don't immediately reduce the total quantity of Tethers in existence. Rather, it impounds the redeemed Tethers.

So what is happening with Tether's treasury wallet? Check out the chart below: 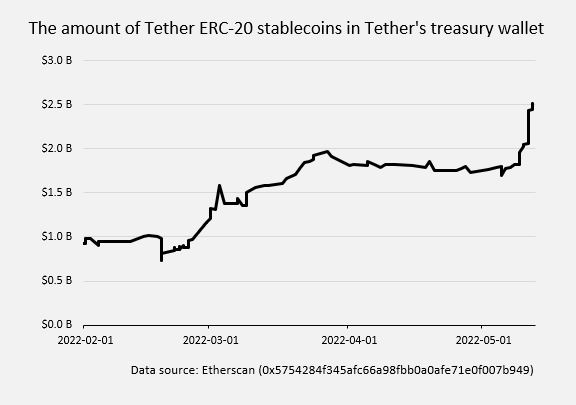 Since late February, the amount of Tether stablecoins sitting in Tether's treasury has increased from around $800 million to $2.5 billion. This is being driven by incoming Tether stablecoins, some of it from exchanges like Bitfinex and FTX. So given that Tether has impounded $1.7 billion Tethers over the last few months, the total circulating supply of Tether has concomitantly decreased by $1.7 billion, most of that in the last few days.

This suggests that Tether is in a contraction phase, just like USD Coin. But Tether's contraction is more muted, at least for now. USD Coin has shrunk by 11%. Using the quantity of Tethers in Tether's treasury wallet as our measure, Tether has contracted by only 4%.

P.P.S. One thing I'm not sure of is how much redeemed Tethers are held by Tether in temporary wallets that aren't its main treasury wallet. If that number is high, then Tether's contraction is further along than my blog post suggests.