As the world's largest stablecoin, Tether has attracted its share of critics. There are several strains of Tether criticism.

Under one strain, Tether is a black box used to manipulate the price of bitcoin higher. I've never subscribed to this critique. It seems far-fetched to me, much like the theories about gold price suppression.

Other critics see Tether as a fraud, say like Madoff or Enron. They stress many of Tether's documented past transgressions. They could be right. But I hope they're not, since that would inevitably mean a lot of people getting hurt.

For my part, I'm not a skilled enough financial bloodhound to be able to sniff out fraud. I've generally started from the assumption that the public information that Tether has disclosed, most importantly its attestation reports, is accurate. A stablecoin attestation report is an examination of a stablecoins reserves, or assets, by an external auditor.

Having generally based my analysis of Tether on its assets, that analysis has always suggested that Tether (in its current incarnation) is doomed, at least in the long term. I suppose that this gets me to a similar ending-point as the Tether-as-fraud critics, albeit via a different route.

The stablecoin competitive dynamic is best characterized as a jog to the top (rather than a race to the bottom). Over a long enough period of time, the safest and most transparent issuers will be the winners. Let me explain why.

Because stablecoins don’t pay interest to customers, customers aren’t compensated for bearing the risk of the issuer’s underlying investments. This incentivizes users to migrate towards the stablecoins with the safest investments and most transparency, the good money eventually displacing the not-so-good.

Of the big three stablecoins (Tether, USD Coin, and Binance USD), Tether has always had the riskiest investment profile. As of Tether's last attestation report, for instance, 14.4% of its assets were comprised of an opaque collection of secured loans, other investments, and corporate bonds & funds (see list below). Meanwhile, Tether's competitors USD Coin and Binance USD are currently 100% invested in Treasury bills, cash, and money market funds.

In addition to a difference in asset quality, I'd argue that USD Coin and Binance USD have better legal protections for users in the event of failure. Binance USD in particular operates under the New York stablecoin regulatory framework, which obliges Binance USD's issuer, Paxos, to operate as a trust. Trusts are effective mechanisms for ring-fencing customer funds from an issuer's other creditors.

Given Tether's outsized allocation to risky assets and fewer protections in the case of insolvency, Tether was always destined to be a victim of a jog to the top. That is, as the riskiest stablecoin it was fated to drip-drip market share to USD Coin and Binance USD until it shrunk into irrelevancy. And that's what has been happening. In the chart below, Tether's dominance has been steadily declining. 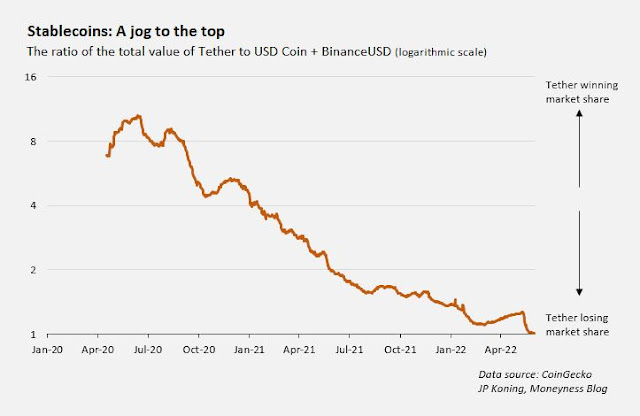 (For more on the jog to the top dynamic, I've written about it here, here, and here.)

On May 12, that slow drip turned into a rush, as the chart below shows. For the prior two years Tether had been growing, albeit at a slower rate than its competitors USD Coin and Binance USD. But over the ensuing two weeks, around 10.5 billion Tethers were quickly redeemed, a reduction of 12.6%. Meanwhile, USD Coin and Binance USD grew by around 5 billion units.

The combined value of USD Coin and Binance USD, the safest top-3 stablecoins, is now equal to the value of Tether, the least-safe of the big three stablecoins. pic.twitter.com/yIM3DS4h5s

I'd argue that Tether's May contraction wasn't the product of the slow grinding attrition of a jog to the top. It was something more serious: an old-fashioned bank run.

Once again, I blame Tether's weakest-link investments: the 14.4% of Tether's assets allocated to secured loans, other investments, and corporate bonds & funds.

What is the makeup of Tether's other investments? We don't know. Tether has never bothered disclosing these details. We also don't know what sort of collateral Tether has accepted for its secured loans, or the rating of the corporate bonds that it hold, or what kinds of "funds" it owns.

Combine this paucity of information with a big drop in cryptocurrency prices over the previous months, and I suspect that by May 12 financial market participants had begun to fill in the blanks with their own worst-case scenarios. A big enough hit to the value of Tether's other investments, for instance, would have meant that Tether was insolvent: that it didn't have enough assets to meet all redemption requests. (Here are Patrick Mackenzie's efforts, for instance, to run the accounting on Tether's solvency.)

For large Tether owners, there would have been two ways to approach a potential Tether insolvency. One option was to just ignore the problem. As long as everyone else does the same and holds on to their Tethers, then a strange sort of let's-all-pretend equilibrium emerges; Tether's peg holds and no one loses.

The other approach is to redeem now while Tether still has a large but limited supply of Treasuries and can easily meet redemption requests. If everyone else follows this same strategy, a run develops. No one wants to be the last one out, since the only assets remaining to support latecomers' redemption requests would be Tether's questionable assets, the ones potentially wiped-out during the prior crypto price crash. Being the last one out could mean only getting paid 30 or 40 cents per dollar.

The second of these two reactions likely took over on May 12, leading to the 10.5 billion contraction in Tether. Luckily for Tether, the big slide in bitcoin and crypto prices has halted. And with the pessimism surrounding all things crypto having dissipated, the run on Tether seems to have ended, at least for now.

Before another crypto market decline hits, I'm hoping that Tether seizes the opportunity to make a few changes.

First, Tether should immediately disclose details about the nature and value of its weakest-link assets: its secured loans, other investments, and corporate bonds & funds. By doing so it would reassure the market and break the collective urge to flee Tether come the next big drop in crypto prices. Tether should also begin the process of unwinding and selling-off its weakest-link assets, investing the proceeds in Treasury bills and investment grade commercial paper. Without risky assets, Tether would be relatively immune to big falls in crypto prices, and this in turn would reduce the threat of a run on Tether.

If the value of Tether's weakest-link assets has been impaired, then mere disclosure isn't going reassure anyone. Tether needs to fill the vacuum by raising new funds. That is, it is insolvent and needs to recapitalize itself. If people who hold Tether stablecoins know that there's a load of new cash sitting in Tether coffers, that'll end their urge to get out the next time the crypto market falls.

The good things about these measures is that they won't only put an end to Tether's chances of facing another run. They'd also solve Tether's longer-term problem of being the victim of a jog to the top.

In my worst case scenario, Tether doesn't do any of these things. It doesn't disclose the nature of its weakest-link assets nor does it make any effort to sell them off. Then the crypto market begins another slide. Investors once again rush to make worst-case inferences about Tether's weakest link assets. A run on Tether develops, but much bigger than the run in May.

By then it may be too late for Tether to make any of the changes that would be necessary to stabilize. In a market rout, getting a recapitalization from other crypto firms may be difficult, if not impossible, and there may be no one willing or able to buy Tether's weakest-link investments. Better to fix things now than later.