How profitable is the world's largest stablecoin?

In a recent blog post, the world's largest stablecoin issuer Tether mocked its smaller competitor, Circle (which issues USD Coin), for being unprofitable. Tether isn't wrong. Circle is losing a lot of money. In Circle's first quarter of 2022, lost $113 million).

But what about Tether? How profitable is it? Unlike Circle, which has taken steps towards an IPO and therefore publishes its finances, Tether is privately-owned, and so information about it is hard to come by.

Luckily, we can get a feel for Tether's profitability by scanning Tether's six attestation reports, the first of which dates back to February 28, 2021. In each report Tether discloses the difference between its assets and its liabilities. For those who have slogged through Accounting 101, you'll know that the difference between a firm's assets and liabilities constitutes its equity. I've plotted out Tether's equity below: 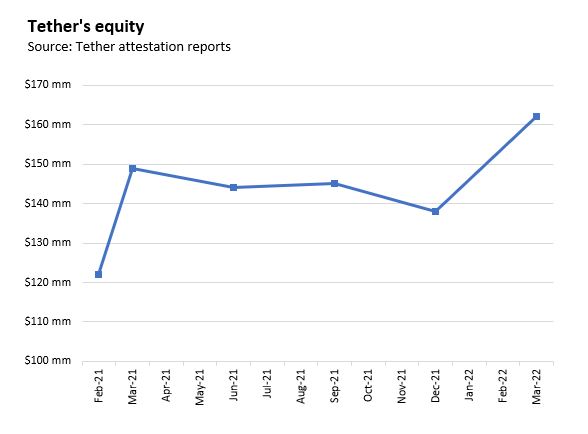 From equity, we can get an approximation of profit. Whenever a firm earns a profit, that profit gets added to its equity. So roughly speaking, an increase in a firm's equity is a measure of the flow of profits it has made over that period.

From March 31, 2021 to March 31, 2022, Tether's equity -- the gap between its assets and liabilities -- increased from $149 million to $162 million, which means that it earned $13 million over that 12-month period. For most of us, $13 million is a fair chunk of change, but it's surprisingly low given that Tether is one of the crypto-economy's largest and most important pieces of infrastructure. I know dozens of small-cap stocks that earn more than $13 million a year.

There are a few caveats to this. The increase in equity might not be due to profits. When a firm raises new capital, this capital gets added to its equity. So any increase in Tether's equity over time could be due to the profit it earns, newly raised capital, or a combination of both.

As far as I know, Tether didn't announce any capital raises in 2021 or early 2022, so based on the reasonable assumption that no capital was raised that during the 12-months ended March 31, 2022, all of Tether's $13 million rise in equity stemmed from profits.

Another caveat is dividends. A firm's equity can also change if it pays out dividends to shareholders. Say that Tether paid out $10 million in dividends in the 12-months ended March 31, 2022. That would have removed $10 million in equity from the firm. In which case its profit was much higher than $13 million. If Tether did pay a series of undisclosed dividends, then we can't use its equity over time to get a feel for its profit.

However, courtesy of an interview with Paulo Ardoino, Tether's chief technical officer, we know that Tether doesn't pay any dividends:

So assuming that Ardoino is telling the truth, $13 million in profits over the 12-month period ending March 31, 2022 seems like an accurate estimate to me, given no dividends and the assumption that no capital has been raised.

For the accounting sticklers out there, I don't think that any of Tether's $13 million in profits comes from changes in the prices of the assets it owns. The category of assets most likely to have risen in value over the last twelve months is Tether's $5 billion or so in opaque other investments. However, in Tether's attestation reports it says that it has adopted the practice of valuing its other investments at their cost price (less impairments), not their market price. So even if those assets had appreciated, it would not be recognized on Tether's profit line.

How exactly did Tether earn $13 million in profits?

During the period lasting from March 31, 2021 to March 31, 2022, Tether had an average of around 60 billion stablecoins in circulation. That is, Tether's customers had deposited $60 billion with Tether, and Tether had issued its customers 60 billion Tether tokens. The company doesn't pay interest to coin holders, which means it gets to keep all of the income generated by this $60 billion in cash for itself. Assuming an average interest rate of around 0.25% over that period, Tether would have enjoyed interest revenues of around $150 million over those twelve months.

It also would have earned a few million from fees on redemptions and deposits. Each time a customer wants to convert Tether tokens into actual U.S. dollars, they must pay a 0.1% fee.

Out of this $150 million or so in revenue from interest, and another few million from fees, Tether paid  expenses such as salaries, court settlements, rent, lawyer fees etc. after which it ended up with $13 million.

What can we expect going forward?

Thanks to research by Intel Jakal, we know that Tether has invested $62.8 million in the equity of collapsed lender Celsius (see spreadsheet). Presumably the Celsius investment is part of Tether's $5 billion in other investments. Shares in Celsius are likely be worthless now, which means that Tether will have to write off its Celsius investment as a complete loss. There's a good chance that this $62.8 million write-off will overwhelm whatever income Tether earned over the three months ending June 30, 2022, resulting in a negative quarter. So Tether's capital, which came in at $162 million at the end of March, could very well fall when it publishes its next attestation report.

Tether may have other risky assets in its other investments that are impaired, too, in which case its losses may be hefty enough to push its equity into negative territory. (Unless it raised equity, a possibility that Patrick Mackenzie considers).

Counterbalancing Tether's losses on its other investments is the improvement in interest rates. Treasury bill rates are at 2% or so these days, much higher right than the mushy 0.25% reward they offered in 2021. This jump in rates comes courtesy of a big pick up in inflation. This means that going forward, Tether will earn much more interest income on its base of customer deposits.

For instance, recall that my best guess was that over the 12-months ended March 31, 2022, Tether brought in $150 million in revenue at 0.25% on a base of 60 billion Tether tokens in circulation. Crank this rate up to 2% and revenues rise to $1.2 billion per year. Assuming costs don't rise much, Tether's profits will jump by quite a bit over the 3-months ended June 30, 2022, and subsequent quarters as well.

However, if inflation is beneficial to stablecoins like Tether, it will also be problematic, for the following reason:

Inflation is a double-edged sword for stablecoins. The yield on their backing assets rises to keep up with inflation, so they earn more. Offsetting this is user flight from stablecoins. A 0% yield doesn't offer any inflation protection, so float shrinks and stablecoins earn less.

Because Tether only pays 0% to those who own Tether stablecoins, but market interest rates are currently at 2%, people will do there best to cut their holdings of Tether in order to invest elsewhere, say in Treasury bills. This is already happening. MakerDAO, one of the largest single owners of USD Coin, is taking steps to sell its hoard of $3.5 billion USD Coin (which like Tether yields 0%), to buy higher yielding conventional fixed income securities such as bond ETFs.

As you can see, being a stablecoin issuer is a very tough business.