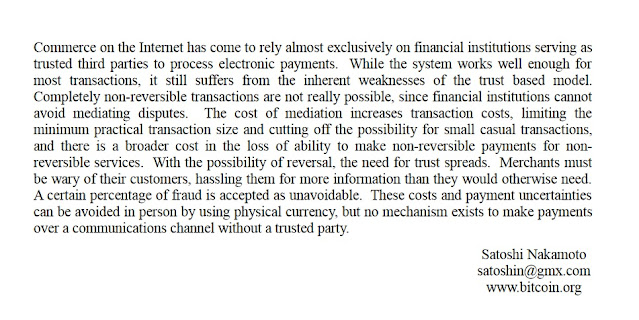 [CoinDesk published my article on reversible Ethereum transactions last month. I'm reposting it here for anyone who didn't have a chance to read it.]

Reversibility on Ethereum: The Benefits and Pitfalls

Imagine that one day you absentmindedly fall victim to a crypto phishing scam, the perpetrator stealing 10 ether (ETH) from you. Crypto transactions are final so there's not much that you can do, right?

Well, not so fast.

To ensure that stolen crypto gets returned to its rightful owner, a group of Stanford researchers recently raised the idea of introducing reversible transactions to Ethereum. If such a standard were to be adopted, your stolen 10 ETH could, in theory at least, boomerang back into your wallet, the frustrated thief being left out of pocket.

Reversibility would probably be a popular feature, especially among the risk-averse who have until now refused to adopt Ethereum. But there are costs to consider, too.With any payments system, tweaking one element to solve a particular problem means introducing a new set of problems somewhere else along the network. There's no such thing as a free fix. Let’s dig into what these costs are.

Crypto theft is everywhere, from large-scale exploits to small retail phishing scams. To make the crypto economy safer, Kaili Wang and colleagues have floated the idea of introducing an Ethereum token standard that allows transactions to be temporarily reversible. During that time period, say four days, a victim of a theft could appeal to a decentralized adjudicator to have their stolen crypto returned.

Satoshi Nakamoto, the creator of the Bitcoin blockchain, would be shocked. After all, Nakamoto's white paper can be read as a diatribe against reversible transactions. Financial institutions "cannot avoid mediating disputes," wrote Nakamoto, and as a result merchants must be "wary of their customers, hassling them for more information than they would otherwise need."

Payments systems involve many complex trade-offs. Solving one problem means adding another problem. A good way to think about this is in terms of the following too-small-blanket dilemma.

Say that you want to go to sleep but your blanket doesn't cover your toes. You pull it down, but now your neck is uncovered. You rotate the blanket to cover both your toes and neck, but now your shoulders are exposed. There is no perfect fix. You need to pick and choose what part of your body to cover and what part to leave exposed.

The same goes for payments. While reversibility may help reduce theft, the too-small-blanket dilemma dictates that it could open the network up to new problems, in particular forms of reversal fraud.

Credit card systems provide a good idea of what to expect.

Credit card owners can dispute card payments and have them “charged back,” or reversed. While this feature protects honest users from card theft, fraudsters take advantage of this feature by making purchases and then disputing the charge, falsely claiming they have not received the item or service. Merchants lose billions of dollars every year to credit card chargeback fraud.

Or take the example of PayPal. For risk-averse shoppers, the ability to dispute and reverse PayPal transactions is a helpful feature. But it has given rise to all sorts of PayPal fraud. In a PayPal overpayment scam, for instance, a scammer takes advantage of PayPal's dispute system to overpay a seller for something, then asks the seller for a refund of the excess. After the overpayment is returned, the scammer asks PayPal to reverse the original transaction. The seller effectively loses the overpayment amount.

PayPal or Visa could do away with overpayment scams and chargeback fraud by making all transactions non-reversible. But then their systems would become less friendly for risk-averse buyers, and adoption would suffer. It's the too-small-blanket problem.

So the price to pay for reversible Ethereum transactions is an inevitable wave of reversal fraud. The decentralized judicial system the Stanford researchers envisaged would quickly be flooded with scammers trying to take advantage of that very reversibility. Weeding out these scams would increase the judges’ overall adjudicating costs.

Providing a degree of protection from theft may very well be worth the hassles of reversal fraud. But the point to remember is this: There is a price to pay for introducing new features. Nothing is free

Introducing reversibility to Ethereum would also have implications for fungibility. When something is fungible, assets are perfectly interchangeable. Fungibility is an attractive feature of a payment system. If all dollars are interchangeable, then it makes the dollar payments system easier to use.

Reversibility would split the Ethereum network in half. Rather than swapping reversible tokens with each other, sophisticated traders would mostly stick to non-reversible tokens. The prospect of having one's $10 million trade unwound because of an appeal by a previous owner for a reverse is just too risky.

But not-so-sophisticated users would probably choose the peace-of-mind of reversible tokens.

Splitting the network in half wouldn't be a big deal if the two token types traded on a 1:1 basis. Alas, they probably wouldn't.

It's another instance of the too-small-blanket dilemma. By adding a new layer of protection, an extra layer of confusion has been introduced.

The Ethereum network would still be usable. Much of the extra burden of non-fungibility would probably be borne by specialist risk appraisers, or brokers, who profit by buying consumers' reversible tokens at a discount (in exchange for non-reversible tokens), and holding them to maturity. As Satoshi suggested, these intermediaries may have to “hassle customers” for extra information in order to protect against reversals.

Even after considering the twin costs of non-fungibility and new types of Ethereum-based fraud, reversible transactions may still be worth it. While non-reversibility may be great for traders, corporations and the tech elite, the enduring popularity of PayPal and credit cards demonstrate that what regular folks want is safety. An opt-in reversible standard would create a warmer and fuzzier Ethereum, one that is more inclusive and attracts a wider range of users.

My gut feeling is, go for it.