Central bank monetization doesn't have to be scary 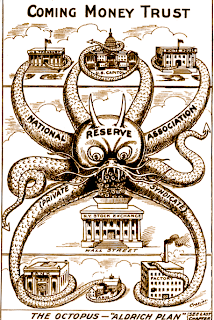 David Beckworth has a good post pushing back against people who are pounding the Fed-is-monetizing-the-debt drums. His point was that there is no evidence of monetization. The Fed today holds roughly the same amount of government debt as a proportion of outstanding debt as it did in times past.

Accusations of monetization need to start out with proper definition of the term. To "monetize" means to turn into money. All banks engage in monetization, whether they be central banks or private banks. Banks monetize houses, debt, commodities and all sorts of other assets, issuing liquid liabilities in return. A credit card essentially monetizes your 30-day IOU. So to accuse a bank of "monetizing" is like accusing someone of breathing.

In conducting QE3 purchases, the Fed is currently monetizing government debt and agency-issued MBS. Is that bad? The Fed has to monetize something. Would people be happier if it was monetizing corporate bonds? Gold? Or do they simply want it to monetize at a slower rate?

There is a pejorative sense of the word monetize. It refers to a situation in which a bank monetizes an asset at a price that benefits the borrower. This is akin to a subsidy. In providing the subsidy, the bank grants the borrower (or issuer) more financing than the borrower otherwise deserves. When applied to the Fed, monetizing in its pejorative sense would seem to indicate that the Fed is subsidizing the government by pushing the government's borrowing rate below its fundamental rate, thereby allowing it to borrow even more. In other words, the price that the Fed is paying for government bonds is above their fundamental value.

Just because the Fed is monetizing government assets doesn't mean it is monetizing in the pejorative sense. As David points out, where's the proof?

Secondly, let's pretend that the Fed is monetizing government bonds in the pejorative sense. In providing this subsidy to the government, the Fed is earning less for itself. Say that this monetization continues until the Fed has negative capital. Typically, it is believed that a government implicitly guarantees to recapitalize the nation's central bank should it be insolvent. In this case, the government just returns to the Fed all the subsidies granted by the Fed. It's a wash, and monetization (in the pejorative sense) has had no net effects.

We need to be explicit about definitions and the relationship between the government and central bank when we talk about monetization.
JP Koning at 2:58 PM
Share