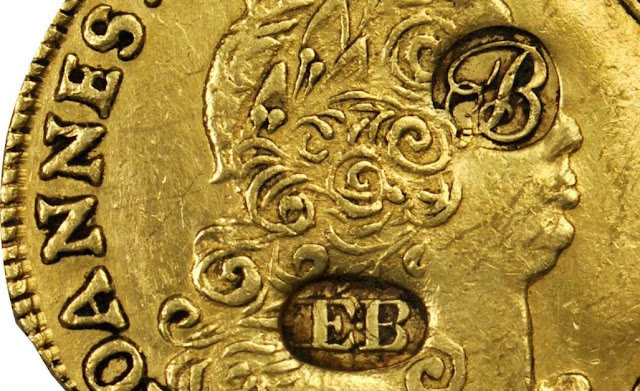 While our modern monetary system certainly has plenty of detractors, one of its successes is that we no longer need the services of the local gold regulator. In the late 1700s, the job of a gold regulator was to assay gold coins to determine if they were of the appropriate weight and fineness, modifying (ie 'regulating') the coin if necessary. When he was done, the gold regulator stamped the coin with his seal of approval and put it back into circulation.

The job of regulating coins may seem strange to us. But it was an ingenious way to cope with the lack of standardization that bedeviled monetary systems in the 1600 and 1700s, particularly in the colonies. There was no domestic supply of coins in North America back then, so settlers relied on a bewildering array of foreign coins as their media of exchange, each with its own weight and fineness, and most of poor quality. This included not only silver coins such as Spanish dollars, pistareens, and English crowns, but also a gamut of gold coins including Portuguese joes and moidores, English guineas, French Louis d'ors and pistoles, German carolines, and Spanish doubloons.

Each of these foreign gold coins was minted with a unique quantity of the yellow metal. For instance, the popular Portuguese half Johannes, or "half Joe", weighed 221 grains and was 91.7% pure when it left the mint, whereas a full-bodied Spanish doubloon weighed 416 grains (one gram equals ~15 grains). Thanks to constant wear and illegal clipping, these coins would inevitably lose some of their mass as they circulated. For merchants, the task of weighing each gold coin that was presented to them, checking if it was a counterfeit, and calculating its appropriate monetary value would have been fatiguing.

To help merchants determine the rate at which to accept a particular gold coin, the authorities published tables with coin weights and values. These coin standards were issued by various legislative bodies or by the merchants themselves. For instance, here is a table produced by the New York Chamber of Commerce in 1770:

Let's go through an example of how an American merchant might use this table. Say a customer offers a merchant a slightly worn half-Joe. The merchant measures the coin and discovers that it weighs exactly 9 dwt, or 216 grains. A dwt is a pennyweight, an archaic unit for measuring weights that derives from denarius weight. (1 dwt = 24 grains = 1.55 grams). Let's further assume say this exchange occurred in New York.

According to the above table, any half-Joe passed in New York that weighs at least 9 dwt 0 grains is legal tender for £3 and 4 shillings. Look in the columns titled "least weight" and "N. York". So if our merchant happens to be selling horses for £3 4s, then he'd be happy to accept the customer's slightly worn half-Joe as sufficient payment for a horse. But if the half-joe were to weigh less than 216 grains (or 9 dwt), then it would fail to meet the Chamber of Commerce's standards, and therefore the merchant wouldn't accept it—the coin is worth less than the horse's sticker price of £3 and 4 shillings.

Testing a coin's weight is easy, but it is unlikely that many merchants would have had the time or expertise to verify its purity. Whereas a Portuguese half-joe was minted with 91.7% fine, a good counterfeit half-joe might be just 88% pure. If a subsequent trading partner questioned a counterfeit's validity, a merchant who had accidentally accepted it could be out of pocket. To remove any doubt, a suspect coin could be brought to the local regulator to be assayed. After removing a small section of the coin, the regulator would then test the coin's gold content. If it was a good coin, he would plug up the test section and stamp his initials on it. Having been approved by a recognized member of the community, the coin could easily pass in trade.

This watchdog function reminds me of the part played by Chinese shroffs, or money changers, in the Chinese monetary system of the 17th-19th centuries. Like North America, China was inundated with a whole range of foreign coins. Local shroffs would assay a foreign coin to verify its silver content. If the coin passed their purity test, a shroff would stamp it with his own peculiar chopmark, usually a Chinese character or symbol. Over time, foreign coins circulating in China might collect multiple chops. The genius of this system is that a naive Chinese consumer could safely accept a strange coin knowing that it had successfully passed the smell test of professional appraisers—and the more chops the better.


If you are interested in the Chinese practice of chopmarking, I wrote about it here and here.

Testing for fineness is just one theory for the role played by North American gold regulators. There is a second theory. Not only were they watchdogs, but regulators also acted as enhancers or correctors. To see why this might be true, let's delve a bit more into the dynamics in play in North America in the 1700s.

If you look at the original table above, notice that the New York Chamber of Commerce listed the minimum accepted weight of the half-Joe as 216 grains. However, as I pointed out earlier, a freshly-minted half-Joe actually weighed 221 grains. So the Chamber of Commerce's standard tolerated the circulation of underweight half-Joes. (They did the same with other coins too, including the doubloon, which when freshly minted weighed 418 grains but was accepted by the Chamber of Commerce at 408 grains.) Providing some extra leeway was probably a wise move. The coins used by New Yorkers came from distant realms and inevitably suffered from wear & tear.

But if a half-joe had lost too much of it original heft it would fail to meet the Chamber's standard. This is where a gold regulator might come in handy. Say that a half-Joe was brought to a bank but found to only weigh 207 grains, well below both the Chamber's standard of 216 grains and its original mint weight of 221 grains. The bank would purchase it at discount, say by crediting the customer with just £3 1 shilling instead of the Chamber's standard £3 4s, then send the underweight coin to a gold regulator. The regulator would proceed to cut out a section of the coin and insert a purer (and heavier) gold plug into the hole, bringing its weight back up to the 216 grain standard.

The regulator would then stamp his initials on his modification, upon which the bank would pay the regulated coin out as change. The regulator's marks were proof that the coin lived up to the Chamber's weight standard, and presumably made it easier to pass from hand to hand. Here is what a coin that has been regulated with a plug looks like:

In the 1700s, only foreign gold coins circulated in the US. The job of a "regulator" was to weigh each one. If it was underweight relative to the standard, they added a plug and initialed it (like the one below, countermarked by John Bayley). If it was overweight, the shaved it. pic.twitter.com/JfRXKq20DP
— JP Koning (@jp_koning) May 14, 2018

A coin could also be modified in a way that reduced it to the Chamber's standard. If a fresh half-Joe arrived in New York weighing 221 grains, it made no sense for its owner to spend it as-is. Given the Chamber's standards, a 216 grain half-Joe was sufficient to buy £3 and 4 shillings of goods and services (or settle £3 and 4 shillings debts). A 221 grain half-Joe was overkill. A customer could deposit their full-weighted half-joe at the bank for more then its value (say £3 and 5 shillings). The bank's gold regulator would then shave it down to size and stamp his initials on it. Thus the modified half-joe could circulate legally despite having a small amount clipped from it. It would have looked a bit like this:


Note the flat part at the bottom where the half-Joe has been clipped by a regulator.

So a gold regulator's role, whether it be as a watchdog or an enhancer, or a bit of both, was to bring some much-needed order to the chaos of a multicoin monetary system. By bringing a gold coin up to standard, or reducing it to standard, they would have helped ensure the fungibility of North America's coinage. And by stamping their initials on it, regulators provided a guarantee of purity to the public—removing some of the uncertainty involved in accepting unfamiliar coins.

By the 1800s, there was no longer a need to have a gold regulators. Most of the deficiencies of the old non-standardized monetary system had been fixed. Paper money had largely displaced gold coins, so merchants had fewer occasions where they had to worry about accepting bad coins. As for smaller denomination silver coins, these were eventually replaced by token coins. The issuer's promise to buy them back at a fixed price, and not their metal content, dictates a token's value. While their time may be past, gold regulators remain a testament to monetary ingenuity.