The life and death of an internet monetary meme

Over the last few years I've increasingly crossed paths with the following claim on the internet: "The average life expectancy for a fiat currency is 27 years." Is this claim true? What definitions are being used? I mean, are we talking about inconvertible paper money here, or currency that was convertible into gold, too?

I finally got curious enough that I decided to chase down the source of this meme. After all, without knowing what data it is based on, it's hard to evaluate the claim's truthfulness. Below I give a description of my trek through internet history.

The average-life-of-fiat meme has become particularly popular among cryptocurrency types. For instance, here is Jimmy Song, a popular bitcoin educator/developer, confidently invoking the slogan back in 2017:


"When a society lacks prudence, what happens is that the society collapses or goes into chaos. It’s not a coincidence that the average lifespan of a fiat currency is only 27 years."

A long list of cryptocurrency luminaries have dutifully mentioned the meme including Dan Held (2018), Taylor Pearson (2019), Barry Silbert (2019), Tuur Demeester (2015), Francis Pouliot (2018), and Adam Back (2019). Grayscale Investments, a firm that provides cryptocurrency-based investment products, even includes it in their marketing material:

Hey @GrayscaleInvest. You say on your website that fiat currencies have "an average life expectancy of just 27 years." Do you have the data to back up your claim? https://t.co/sscStL8efj @barrysilbert pic.twitter.com/bIj7D3ZWaS
— John Paul Koning (@jp_koning) September 17, 2019


As is often the case these days, crypto bugs have cribbed their ideas from their older cousins, the gold bugs. Nathan Lewis, author of Gold: The Once and Future Money, mentioned the idea in written testimony to Congress in 2012. Ralph Benko, a gold standard advocate, invoked the meme in a 2011 article. And Max Keiser, a long-time gold bug turned cryptocurrency advocate, began mentioning it as early as 2013. Where did Keiser, Benko, and Lewis get the meme from?

One of the meme's earliest and most cited appearances comes from Washington's Blog, a platform for a group of anonymous financial writers. We know little about this group except for the fact that George, "website owner and lead writer – is a busy professional, a former adjunct professor, an American and a family man."

In August 2011, Washington's Blog published an article with the brutally long title The Average Life Expectancy of a Fiat Currency is 27 Years... Every 30 to 40 Years the Reigning Monetary System Fails And Has To Be Retooled. The author failed to explain how the 27 years claim was derived. Instead, he/she relied on another article by a writer named Chris Mack for backup. In a disclaimer the author noted that "I don't know Chris Mack," and thus couldn't vouch for the figures. "However," he/she went on to say, "the general concept is correct."

That's an odd way to do analysis, no? I've to this number for you, 27. I don't know how the number was generated, or who came up with it. But it's good enough. So go ahead and use it.

After a bit of hunting, I found Chris Mack's article here (the link at Washington's blog is dead). It is dated January 2011, pushing back the meme's genesis by another few months. At the time, Mack was President of Trade Placer, a "real-time marketplace where you can buy or sell items such as gold, silver, platinum, wine and other collectibles." Now he is the CEO at Levidge, a platform for trading cryptocurrencies. Note again the well-trodden corridor between gold buggery and crypto buggery.


"According to a study of 775 fiat currencies by DollarDaze.org, there is no historical precedence for a fiat currency that has succeeded in holding its value. 20 percent failed through hyperinflation, 21 percent were destroyed by war, 12 percent destroyed by independence, 24 percent were monetarily reformed, and 23 percent are still in circulation approaching one of the other outcomes.

The average life expectancy for a fiat currency is 27 years, with the shortest life span being one month. "

Mack mentions a study by DollarDaze, but doesn't provide a link to the article. Aha, the missing data! I hopped over to DollarDaze's website, a blog dedicated to talking about the failings of the U.S. dollar. But there are no blog posts older than 2018. No study, folks.

This puts all the meme users--Jimmy Song, Grayscale, Max Keiser, and the rest--in an absurd situation. There are some words on some websites about a study, but ask our meme users where the study is and none of them can actually find it. Did it ever exist? Why are they so confidently transmitting data when there is no data? DollarDaze has got to be right, no? How could you doubt it, JP?

Since no one was able to help me, I turned to the Wayback Machine to see if I could pull up older versions of the DollarDaze website. It took a while, but I finally found pay dirt. Back in 2009 the editor of DollarDaze, Mike Hewitt, wrote an article entitled The Fate of Paper Money. I tried to track Hewitt down, but he seems to have disappeared from the internet.

No matter. Finally, some data to evaluate! In his article, Hewitt claims to have counted 176 currencies in circulation and 599 currencies that are not in circulation. Of the 599 in his discontinued list, Hewitt comments that the "median age for these currencies is only fifteen years!" He provides links to both lists (1 and 2).

I downloaded Hewitt's list of 599 defunct currencies and put it into an Excel spreadsheet. The median age is indeed 15 years, as Hewitt claims, and the average is 27 years, as Mack claims in his subsequent 2011 article. So voila, we finally have the basis for the modern internet meme that the average age of a fiat currency is just 27 years. It's based on Hewitt's list of 599 dead currencies, with Mack taking the average duration. (They conveniently don't include the list of 176 existing currencies in their calculation, which would have increased the number).

Now for my criticisms.

The 27-years meme has been used for many years now as a prop for making gold and cryptocurrencies look good. "Ha ha, suckers! Only 27 years until your paper is worthless!" But many of the 599 defunct currencies in Hewitt's list weren't failures. Rather, they were replaced for political, economic, and cultural reasons.

And things haven't improved much from there other than getting better at not imploding in 5months flat, tho there are appalling stats about the lifetime of fiat currencies since inception (27 years average). the oldest is the GBP at 317 years and even it lost > 99.5% of value.
— Adam Back (@adam3us) July 31, 2019

For instance, the list contains all of the pre-euro currencies (Dutch gulder, French franc, Italian lira, etc). These currencies had good reasons for disappearing: they were swapped for a new monetary unit. Existing currency holders weren't robbed. They were fairly compensated for this switch.

Another example of monetary reorganization occurred in East Africa. From 1919 to the 1960s, Britain's former east African colonies relied on the East African shilling, produced by the East African Currency Board. When these countries gained their independence, the currency board was dismantled. In its place Kenya began issuing its own shillings at par with the old ones, as did  Tanzania and Uganda.

In each case, existing owners of East African shillings could convert their holdings into new currency. No wealth was being destroyed during any of these switches. But people who throw around the phrase the average life expectancy for a fiat currency is 27 years as a criticism of the very institution of currency are using the data in a way that implicitly assumes that the East African experience--and others like it--were negative. They weren't.

So the idea that Hewitt's list somehow measures the length of time between a fiat currency's birth and its impending worthlessness is just wrong. I'd go even go so far as to say that the plasticity of the listed currencies is one of their strengths. As national borders change and political circumstances shift, the writing on the bills should be updated too.

Hewitt's list contains many data errors. He makes the odd claim that the Japanese gold oban and silver momme were created in 1904 and met their end in a hyperinflation in 1905. But these were both historic Japanese coins that had existed for centuries. Hewitt also lists the U.S. greenback ("US Paper Dollar) as lasting from 1862 to 1878. But this isn't correct. Greenbacks were repegged to gold in 1878, but they continued to be issued for many decades after.

Or take Hewitt's categorization of British Military Authority (BMA) lira as dying in hyperinflation. This is an odd claim to make. BMA Lira were issued in Libya by occupying British forces both during and after World War II to provide the nation with a circulating medium. These notes were basically a military version of the British pound, with 480 lira equal to a pound sterling. In 1951 BMA Lira notes were converted into Libyan pounds, issued by Libya's new currency board, at a rate of 480-to-1. No hyperinflation here. 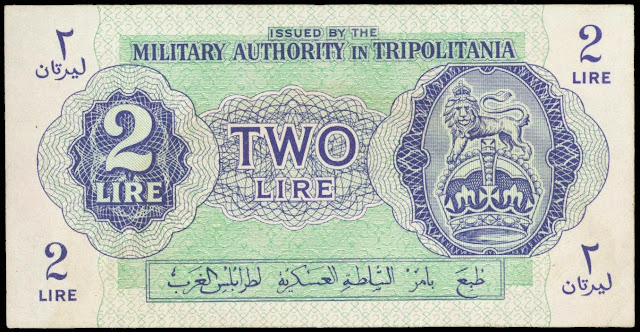 Finally, take Hewitt's claim that the Hawaiian dollar was "destroyed" by WWII. Not so. I've written about the Hawaiian overprints before. To protect against a potential Japanese invasion of Hawaii (and a confiscation of dollars by Japanese soldiers) all dollars on Hawaii were overprinted. Once the threat of Japanese invasion had disappeared they were swapped for regular U.S. dollars and withdrawn . But not a single Hawaiian lost anything during the entire process.

I don't want to nitpick too much, but given that it only took me a few minutes to find these four mistakes, one can only conclude that the rest of Hewitt's list is riddled with errors.

Finally, there are some semantic issues. Fiat currency is generally considered to be inconvertible money. It can't be redeemed for gold or silver. The world really only shifted onto a fiat standard between 1968-71 as the dollar ceased to be redeemed in gold. But Hewitt's list is replete with many metallic currencies (i.e. the riksdaler riksmynt). Are people using his data to make a claim about currencies in general, or just fiat ones? The meme isn't clear on this.

So having examined the life of an internet monetary meme, I'd like to kill it. It's time for us to retire the idea that says that "the average life expectancy for a fiat currency is 27 years." God knows there's plenty of problems with currencies. But good criticism requires diligence and accurate data. The meme in question is an example of sloppy work and bad data.

I know that the crypts and the bugs and the fiats are engaged in constant meme warfare--the bugs and the fiats for many decades now, the crypts only joining the battle a few years ago. Messages must be crafted for best efficiency, whether this be to pump bitcoin to the moon, or to push gold into the stratosphere, or to lock the fiat system in place. But most of the serious people involved in these debates, no matter which side, still keep at least one foot in the truth. Let's flush the 27-years meme down the toilet, folks.
Posted by JP Koning at 6:57 AM