Leaving a monetary union is difficult, but Hawaii pulled it off 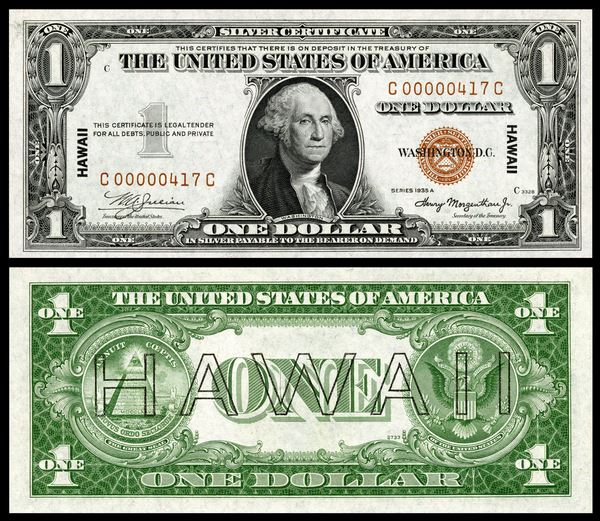 In campaigning for a departure from the Euro, both France's Marine Le Pen and Italy's Beppe Grillo,  make the process sound easy. But one does not simply walk out of a monetary union. There are all sorts of messy problems to deal with, including harmful bank runs, massive banknote shortages, and long legal battles with investors over wealth confiscation and the redenomination of debts.

I recently stumbled on a successful and rarely-discussed exit from a monetary union: Hawaii in 1942. Hawaii's was a different sort of exit than a potential French or Italian euro exit. Whereas the latter are reactions to being straitjacketed in the face of a slow and grinding recovery from financial crisis, Hawaii's exit was executed in anticipation of a potential military invasion. Despite differing motivations, it's worth investigating the Hawaiian episode to see what it takes to pull off a successful exit.

To understand the course of events, I drew on several Fed bulletins from 1942 (including this one),  but for the most part relied on Martial Law in Hawaii, written by Brigadier General Thomas H. Green, the man who designed Hawaii's exit from the U.S. monetary union (PDF here). As everyone knows, Pearl Harbor was bombed by the Japanese on December 7, 1941. Hawaiian residents soon began to fear that a full scale invasion was imminent, and a bank run of sorts developed on the island. Here is Green describing the run:


"From the time of the Blitz, everyone realized the possibility of the return of the Japs and naturally gave consideration to the safety of their money. Those who had bank deposits began to worry about the security of their deposits and as a result many withdrew their savings and secreted them in various places considered safe...The result was that the banks were gradually running out of cash."


In the light of what the Japanese invasion forces were doing in the Pacific theatre, fleeing one's bank made good sense. According to Green, when the Japanese surprised the British forces in Singapore, they confiscated all hard currency, both from banks and and individuals' wallets. For the recalcitrant, Japanese troops had "special procedures" for getting prisoners to give up their possessions. Later on, the territories occupied by the Japanese would be forced onto a scrip-based monetary standard which quickly succumbed to inflation. Given such a fate, better for Hawaiians to withdraw U.S. banknotes ahead of an anticipated Japanese invasion rather than during or after one. That way they'd have enough time to find a good hiding spot for their notes on Hawaii, or ship them to the mainland for safekeeping.

The same sort of defensive run that occurred in Hawaii also happened several years ago in Greece. Greek fears that they would be cut off from the euro, their deposits suddenly frozen only to be redenominated into a much less valuable unit of account, led them to cash out before the anticipated event. In both cases, premonitions of confiscation motivated the run.

Brigadier General Green put an end to Hawaii's bank run on January 9, 1942 by prohibiting the withdrawal of more than $200 per month from banks and forbidding anyone from holding more than $200 in cash. Although he doesn't specify, I'm going to assume that this $200 limit applied not only to cash withdrawals but also bank wires from Hawaii to mainland banks. By putting an end to the convertibility of local bank deposits, Hawaii now had one foot out of the dollar zone. A dollar held in a Hawaiian bank was no longer quite like a dollar in the rest of the U.S.

For those with long memories, the same thing happened in Greece in 2015 when capital controls and cash withdrawal limits were imposed. Frozen Greek euros held in banks were no longer fungible with the rest of Europe's money.

In principle it should be very difficult to enforce limits on cash holdings. Yet Brigadier General Green described the effect of his prohibition as "astonishing." Where before banks only had $1.5 million on deposit, over the next several days long lines developed to deposit funds so that after the order, banks found themselves with more than $20 million on deposit. Much of the banknotes were "moist and even wet," noted Green, indicating that they had been recently unearthed from hidden caches.

While Green's prohibition stopped Hawaii's bank run, it didn't solve the problem of how to prevent notes from being seized should the Japanese invade. Green's initial solution to the confiscation problem was clumsy one. On the first sign of an invasion, Treasury employees toting burlap bags were to run to important intersections in Honolulu where they would collect bundles of banknotes from citizens, providing a receipt in return. The burlap bags containing the money would then be delivered to the city incinerator where they would be burned. The receipts, which would be redeemable for currency after the war, would be worthless to the Japanese, who wouldn't be able to collect on them.

Luckily, Green soon came up with a more elegant approach: create a new currency, or scrip, ahead of time. In the event of an invasion, this scrip would be immediately outlawed by a simple proclamation, thus preventing its use by the Japanese. Far easier to solve the confiscation problem by mere proclamation than have employees standing at intersections with burlap bags. Agreeing to the idea, the U.S. Treasury had a special issue of banknotes printed up. The new bills were similar to ordinary U.S. banknotes except that the seals and the numbers were printed in brown ink instead of green and the bills bore the word "Hawaii" overprinted in black on both sides (see top image).

On July 7, 1942 the Governor announced that anyone in Hawaii holding U.S. currency had until July 15 to visit a bank and turn the notes in for special Hawaii overprints. After the 15th, it would be illegal to hold regular banknotes. Henceforth, all notes imported from the mainland had to be immediately turned over to the authorities for conversion. Exports of overprints was prohibited. Anyone who wanted to transfer wealth to the mainland had to exchange it with authorities for regular currency. The punishment for evading these rules was harsh:


"Whoever is found guilty of violating any of the provisions of such regulations, shall, upon conviction be fined not more than five thousand dollars ($5,000), or, if a natural person, may be imprisoned for not more than five (5) years, or both." (source)


Over the 7-day exchange window, U.S. banknotes that were brought into banks for conversion were collected and burned. According to the New York Times, more than $200 million was taken to a crematorium in Oahu that soon ran out of capacity, the rest subsequently being hauled to furnaces at a a local sugar mill. Among the officer ranks, the task of serving on the crew that burnt notes was much sought after. Here is Green:

So by July 15, 1942, Hawaii had effectively left the dollar zone. Gone were regular greenbacks. The sole media of exchange were Hawaiian overprints and overprint-denominated deposits. In practice, the authorities maintained a policy of pegging Hawaiian dollars to U.S. dollars at a rate of 1:1. But if they wanted, they could have easily ratcheted that peg down or up. Alternatively, in the event of an invasion, the authorities could completely unpeg the Hawaiian dollar and let its exchange rate float. Without a strong central bank to back it, the exchange rate would probably have plunged to zero, or at least close to it. Which was exactly the point of Green's scheme... to take all the difficult steps of leaving the U.S. monetary union ahead of time so that, come an invasion, only the last (and easiest) step remained, floating the currency. Very clever.

The era of the Hawaiian dollar was a short one. With the Japanese threat now much diminished, Hawaii would be reabsorbed into the dollar zone in 1944. Regular U.S. dollars were once again allowed to circulate in Hawaii while the issuance of overprints was halted. In 1946 all overprints were recalled and destroyed.

Could Le Pen or Grillo follow the Hawaii scrip script (pardon the pun) and leave the eurozone by declaring capital controls and then printing out new paper money? Greece went half way when capital controls were instituted in 2015... could it not have gone all the way?

There were probably a few factors working in Major General Green's favor that Le Pen and Grillo lack. To begin with, Hawaii is an isolated set of islands. Avoiding the note exchange window and sneaking dollars to the mainland would have been tricky. European borders are quite porous. I don't see why French or Italian citizens would submit to bringing their euro banknotes in for conversion to an inferior currency  when they could easily sneak them across the border into Germany.

Second, martial law had been imposed in Hawaii whereas Italy and France are democratic nations at peace. It would be much harder for the likes of Le Pen and Grillo to pass the draconian set of laws (and associated punishments) necessary for exit.

In executing an exit from a monetary union, in the time that elapses between the limit on bank withdrawals and the issuance of a new currency, the economy will probably suffer from a deep note shortage. Because so many people remaining on Hawaii were enlisted men whose needs were taken care of by the army, monetary exchange was less crucial. Not so the economies of modern France and Italy, which would endure a crippling shortage of transactions media.

Finally, the attitudes of citizens are different in wartime. United against a common enemy and trusting of their leaders, Hawaiian residents by-and-large submitted to the monetary inconveniences that were seen as necessary to winning. Witness the long lines described by Green for depositing notes after the $200 holding limit was established in January 1942, despite the impossibility of authorities actually enforcing such a rule. Le Pen and Grillo, on the other hand, govern divided populations. The requisite society-wide eagerness to leave the euro, one that would emerge in the face of a strong invading force, just isn't there.
Posted by JP Koning at 12:22 AM