Why did Dogecoin take off but Feathercoin didn't?

Dogecoin makes us all shake our heads. Introduced in December 2013 as a joke, Dogecoin is now worth over $50 billion, more than Ford Motor Co. Meanwhile Feathercoin, a more serious cryptocurrency that debuted in April 2013 (and initially worth more than Dogecoin), is currently valued at a tiny $10 million.

Here's the December 2013 list of top cryptocoins. After the first 3, all of them are pretty much dead/inactive except for the one that was started as a joke and is now worth $17 billion. 🤷https://t.co/ImBu5CUxpr pic.twitter.com/R0tPBWl35C

How are we supposed to understand the strange thing that is Dogecoin?

Let's start by exploring what these odd instruments are. While Dogecoin and Feathercoin seem like an entirely new phenomenon, I'd suggest that they're both really just an updated version of a fairly old financial instrument. You may remember those chain letters your parents used to get in the mail. "Send $5 to each person on the list, then copy it (adding your name to the bottom) and send to their friends," the letter would say. "Then wait for the money to flow in."

Old fashioned chain letters were simple ranked lists that propagated through the post. Propagation occurred in a decentralized manner. There was no "schemer" administering the whole thing. Each player was responsible for abiding by the letter's rules.

Dogecoin (along with Feathercoin) is an updated version of your parent's decentralized chain letter. To begin with, the deployment mechanism is different. Doge propagates over the internet, not the post. Secondly, Dogecoin software ensures honesty. By contrast, old fashioned chain letters – reliant as they were on pen, paper and photocopy machine – were dogged by cheaters who snuck their name to the top of the list.

Rather than have people manually append their names to the list, Dogecoin software creates all the entries in at the outset. And instead of being hierarchical, all spots in the Dogecoin list are equal, or fungible. (All of this goes for Feathercoin, too.)

But other than that, the core concept of a chain letter remains the same: those who already have a spot in the decentralized list are paid off by late-comers.

Sophisticated markets have sprung up to serve those who want to buy & sell these modern honest and fungible chain letters. PayPal, Robinhood, and newly-public Coinbase all let users buy Dogecoin. And so Dogecoin has been effectively fused into the regular financial system.

This degree of mass adoption never happened with your parent's chain letters. Prior to the emergence of cryptocurrencies, chain letter list entries weren't fungible. And so secondary markets never developed. Lacking any sort of integration into regular finance, the chain letters of the 1980s and 90s never went beyond being a sketchy underground phenomenon.

Fans of honest & fungible chain letters (or HFCLs) like to explain them by adopting the complicated rhetoric of monetary economics. Feathercoin says it is for "feather lite payments." More famously, Bitcoin has been variously marketed as a "coin", a store of value, digital gold, or a form of electronic cash destined to "replace fiat currency." This has given the cryptocurrency sector a certain gravitas.

But as Joe Weisenthal points out, Dogecoin doesn't have any of these pretensions. It's just a fun token with a Shiba Inu dog as a mascot. And so all of the rhetoric that traditionally gets attached to cryptocurrency is conveniently stripped away. We get to see Dogecoin and Bitcoin for what they truly are, HFCLs.

Dogecoin's cuddly Shiba Inu has proven be a great tool for propagation, better even than bitcoin's marketing strategy of co-opting the stodgy lingo of monetary economists. In the chart below, I compare the market capitalization of the first 2,690 days of Dogecoin and Bitcoin respectively. 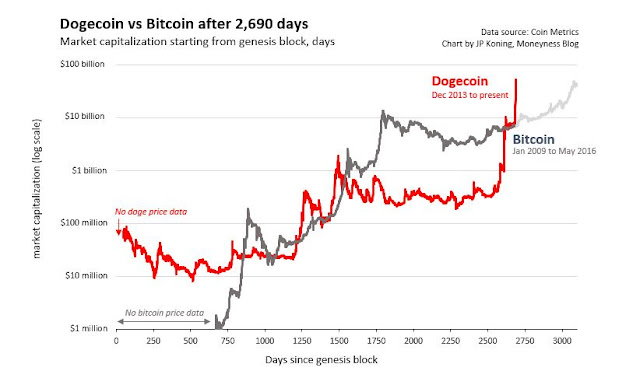 Think of market capitalization – the number of list entries multiplied by their current market value – as a measure of an HFCL's success. But take that number with a grain of salt. If all existing list entry owners actually did try to sell at once, an HFCL's value would fall to zero.

Nor is this the first time that Dogecoin has moved ahead of its older HFCL cousin. As the chart above shows, Doge's market capitalization outranked bitcoin through much of its early life. It also took the lead around days 1,300 and 1,600.

Bitcoin fans aren't pleased. Dogecoin is a bit like your embarrassing younger sibling, the one that you want to hide in the closet because he/she reveals a little too much of the family's foibles. Cryptocurrency is supposed to be about monetary revolution, not fun dogs.

I'll grant there are some differences, but none as deep as bitcoiners might prefer. Yes, Bitcoin is a bit older than Doge and Feathercoin. And they all have very different marketing techniques i.e. fun vs serious. And one of them, Dogecoin, has been (pound for pound) a bit more successful. But apart from that, they're all the same thing. They are all HFCLs.

Whenever experts warn against chain letters, the point they always bring up is that chains cannot be sustained indefinitely. For everyone to make money, a chain letter must grow exponentially. But at some point the math stops working. There won't be enough people left on earth to feed the chain letter.

Does cryptocurrency have to end in tears?

I'm not so sure. Yes, HFCLs require a constant stream of new players to buy in so that earlier players can exit at a profit. At some high enough market capitalization, there simply won't be enough buyers on earth to pay off ensuing waves of sellers. The HFCL collapses.

Feathercoin offers a good template. Feathercoin and Dogecoin were both part of a huge influx of new HFCLs in 2012 and 2013. This crop included Peercoin, Terracoin, Novacoin, Litecoin, Sexcoin, Worldcoin, Ixcoin, and hundreds of others. You can see some of them on the list in the tweet at top of this post. Funny enough, I wrote about the 2012-13 cryptocurrency wave on my blog: see here and here. (Wow, hard to believe I've been doing this for so long.)

Below is a chart of Feathercoin's market capitalization over the last eight years. It has generally moved around between a trough of $100k-$1m and a peak of $10m-$100m. (Note that I am using a log scale axis.) Buy Feathercoin early and hold till its peak and you've effectively turned $100 into $10,000. It is this whiff of huge gains that tempts people into playing HFCLs. Buy too late, however, and your $100 becomes $1. 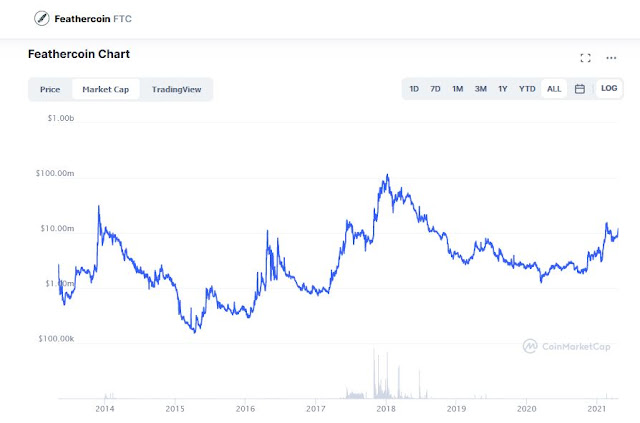 Of the 2012-13 crop of HFCLs, many of them look like Feathercoin. They haven't grown, but they still exist. Dogecoin is different (and so is Bitcoin). It shares the same general peak-to-trough pattern as Feathercoin. But its peaks and troughs have been steadily rising.

What I think is happening here is that there is a huge pent up demand to play HFCLs. They are a fun way to potentially make huge amounts of money. But this demand eventually gets focused on a few lucky chains. After all, the market doesn't need 200 HFCLs when two or three large one will do.

How does the market settle on two or three? I suspect it probably comes down to luck. Finicky things like mascots, logos, influencers, and catchy names probably play a role too. In Bitcoin's case, being first is a huge benefit. And so most HFCLs sort of putter around like Feathercoin. They don't die. But they don't expand either.

I suspect that Dogecoin and Bitcoin will eventually follow the same pattern as Feathercoin. Growth will peter out. Peaks will start to roughly align with previous peaks. Troughs will form at the same level as previous troughs. And in-between these peaks and troughs, huge fortunes will continue to be made and lost.