The dollar isn't a meme 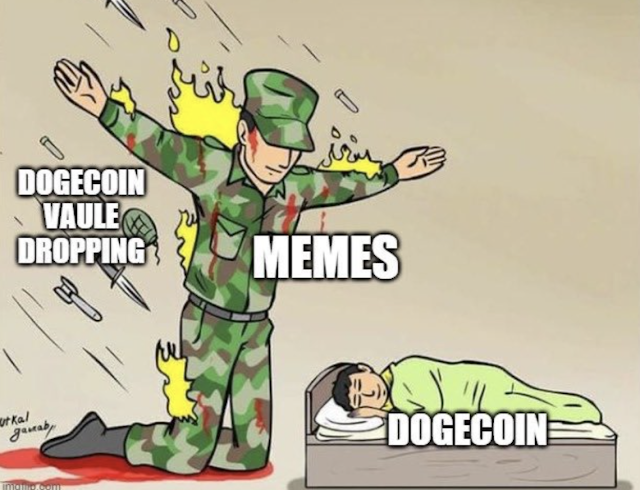 "Currencies are not memes that only have value because governments say they do," writes Brendan Greeley for the Financial Times.

I agree with him.

The dollar-as-meme claim is often made by cryptocurrency enthusiasts. That this idea would emanate from the cryptocurrency community makes sense, since cryptocurrency prices are a purely meme-driven phenomenon. There is no cryptocurrency for which this is more apparent than Dogecoin, a cryptocurrency started as a joke and sustained by shiba inu gifs, but it applies equally to Doge's older cousin, Bitcoin. The harder you meme the higher a cryptocurrency's price, as the image at top suggests.

And so for cryptocurrency analysts, getting a good understanding of a given coin's value is a matter of picking through its underlying memes and meme artists.

But if cryptocurrency analysis is ultimately just meme analysis, what sort of analysis applies to dollars?

Dollars issued by banks are secured by the banks' portfolio of loans, Greeley reminds us. And so they are subject to credit analysis, not meme analysis. An analyst appraises the quality of the bank's investments in order to determine the soundness of the dollar IOUs the bank has issued.

As for central banks like the Fed, they are just special types of banks, says Greeley, and so the dollars they issue are also subject to credit analysis.

The idea that the money issued by central banks—so-called fiat money—is subject to the same credit analysis as any other type of debt security is a point I've also made on this blog. There are certainly some odd features about Fed dollars or Bank of Japan yen, but ultimately they are just another form of credit.

What sort of credit is fiat money? There are many different kinds of credit instruments, from bonds to deposits to banknotes, each with its own unique features. To see where central bank money fits, I've made a chart that illustrates how credit instruments differ across three different criteria (click to expand). 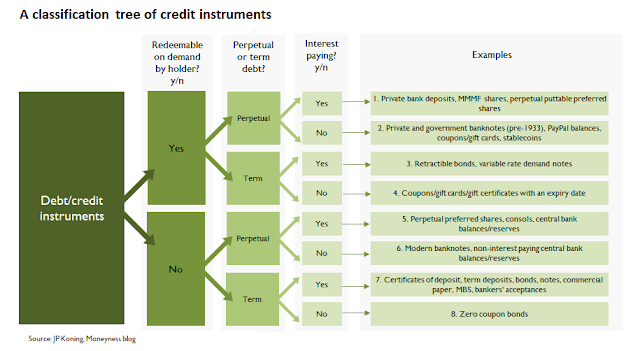 The first criteria along which to compare credit instruments is whether the instrument is redeemable on demand by the holder or not. That is, if I own a given credit instrument, or IOU, can I bring it back to the issuer, or debtor, at a time of my choosing and redeem it for something?

The second category concerns the instrument's maturity. Does it stay outstanding forever i.e. in perpetuity? Or is it term debt? When a credit instruments has a term, that means that it expires after a predefined period of time, the debtor cancelling it and paying back the the original amount lent.

The final category is whether the instrument pays interest or not.

By toggling these various features, we arrive at the eight different types of credit instruments, examples of which I've listed on the right side of the graphic.

As you can see, the Fed's dollars, the ECB's euros, and the Bank of Japan's yen are type 5 and type 6 credit instruments. Central banks issue two types of money: physical banknotes and electronic balances (sometimes known as reserves). Electronic central bank reserves pay interest. Banknotes do not.

Apart from that, banknotes and electronic balances are very similar instruments. Neither of these two credit instruments is redeemable on demand. That is, you can't bring a banknote back to the issuer at 5:30 PM Friday and redeem it for something. (This same lack of on-demand redeemability characterizes bonds and certificates of deposits.) And they are both perpetual, much like a perpetual preferred share or non-expiring coupons/gift certificates.

For instance, if a retractable bond (type 3) suddenly loses its retractability feature (and is no longer redeemable on demand by its owner) it doesn't stop being a credit instrument. It simply switches to being a regular bond (type 7). Likewise, if a perpetual puttable preferred share (type 1) loses its puttability, it doesn't stop being an IOU. It becomes a new type of credit instrument, a regular perpetual preferred share (type 5).

Once a credit analyst has figured out what kind of credit instrument they are dealing with, their work is only half done. Next they have to go back and look at the underlying issuer. How solid is it? Does it have sufficient assets to guarantee the credit instruments it has issued? Do it generate enough income to keep paying interest? Is the issuer linked to affiliates, parents, or other third-parties who might strengthen or diminish the issuer's credit?

As you can see, none of this is meme analysis. It is credit analysis.

To recap, dollars issued by the Federal Reserve are perpetual credit instruments that lack an on-demand redemption feature. To determine how solid the Fed's perpetual non-redeemable credit instrument are, you'd want to do an analysis of the Fed's finances. That should also include investigating the soundness of the Fed's parent, the U.S. government. Does the parent's finances further enhance the Fed's credit, or detract from it?

If you want to do meme analysis, stick to Dogecoin and Bitcoin.