This is a quick post to share some of the things I've learnt from watching Tether over the last two months. I'm hoping other Tether watchers find this information useful and share some of their own Tether watching tricks in the comments section. (No conspiracy theories, please. Just analysis).

There's two sides to watching Tether. You can observe its real-world activity like its attestation reports, press releases, brushes with the law, and its social media accounts. Or you can follow its life on the blockchain, where it issues digital stablecoins. This post focuses on the latter. In particular, I'm going to analyze the blockchain for redemptions: those on-chain transactions in which Tether units move from Tether customers back to Tether itself.

I'm going to assume some basic knowledge of Tether and blockchain analysis.

To understand how Tether works on-chain, the most important wallets to track are Tether's two treasury wallets. Tether's Tron-based treasury wallet is located here, and the Ethereum-based wallet is here. (Tether also issues tokens onto other blockchains, but the amounts are relatively small, so for simplicity's sake I'm going to focus on Ethereum and Tron-based Tether activity.)

All Tether units begin and end their life in Tether's treasury wallets.

Tether mints new units only rarely, and when it does, in large sizes.

These balances of freshly-minted non-circulating Tether are regularly augmented by inflows of redeemed Tether units. Redemptions occur when customers transfer their unwanted Tether tokens to Tether's treasury wallet to be redeemed for a wire transfer of regular dollars. Each redemption reduces the quantity of Tether in circulation while increasing the quantity of non-circulating Tether units sitting in Tether's treasury wallets.

Tether doesn't destroy, or burn, each incoming Tether redemption. It waits for a number of redemptions to accumulate in its treasury wallet and then burns them all in one big batch.

I've charted out what this treasury working balance looks like going back to late 2021. Note that the chart combines both Tether's Tron and Ethereum treasury balances. 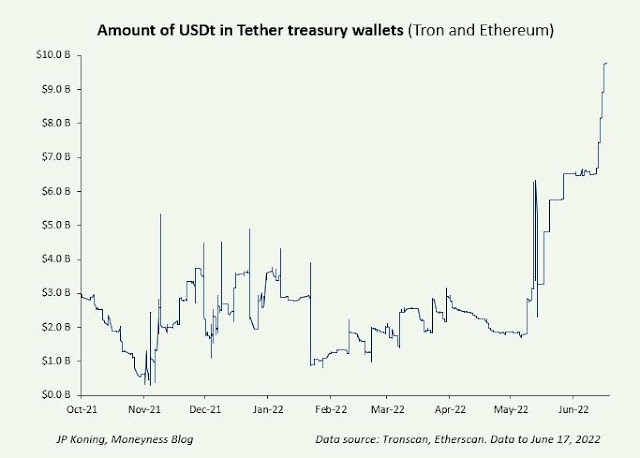 You can see that in 2021 and early 2022 Tether typically let its treasury wallet balances rise to $2-4 billion before burning them. In May and June 2022 it altered this practice by allowing them to balloon to over $10 billion. (Tether recently burnt 11.1 billion Tether units, bringing its working balance back to more normal levels.)

Having worked out how treasury wallets function, I want to focus a bit more on the redemptions themselves. Of the 432 redemptions that I counted from July 2021 to June 15, 2022, a total of 133, or 31%, come from wallets tagged as being owned by Bitfinex, a cryptocurrency exchange owned by Tether's parent. (26 Tron, 107 Ethereum).

Why do such a large proportion of transfers sent to Tether's treasury wallet originate from Bitfinex?

What I believe is happening is that rather than sending redemptions directly to Tether's two treasury wallets, large traders often send them to Bitfinex instead. Once the Tether tokens arrive in Bitfinex's wallet, Bitfinex makes the trader whole by wiring them actual U.S. dollars. So from the trader's perspective, the redemption process is complete. They have cashed out their Tether units.

From Bitfinex's perspective, however, the redemption process is not done.

Rather than sending traders' redeemed Tether tokens immediately to Tether for cancellation, Bitfinex generally holds them for a period of time. I suspect that Bitfinex delays these transfers so that it can meet incoming requests from traders for new Tether issuance out of its own inventory. A delay also allows Bitfinex to accumulate additional redeemed Tether tokens so that it can send the balance in one convenient end-of-period batch to Tether's treasury rather than multiple small transfers.

We have evidence that redemptions are happening via the intermediation of Bitfinex. In a 2021 article. Alameda Research—a crypto trading firms—points to a set of Tether redemptions that it claims to have completed. They were all processed through Bitfinex rather than Tether. (ht @ Matt Ranger)

To get a feel for how Bitfinex manages its Tether balances, I've charted out the quantity of Tether balances held in Bitfinex's #2 wallet below. The chart covers May 1 to June 15, 2022. 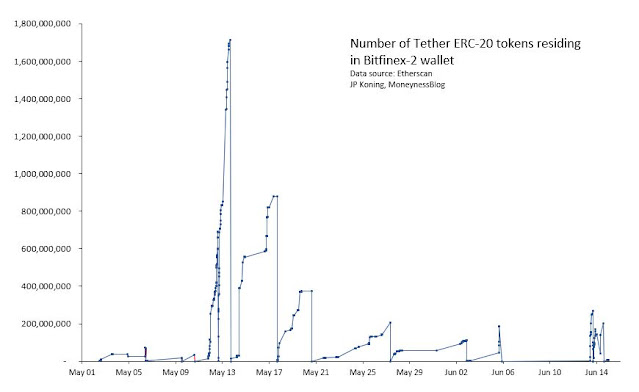 Admittedly, this was an unusual period of time for Tether due to record-high redemptions. (At one point in May it had built a balance of over 1.7 billion Tether units!) In any case, you can see how Bitfinex steadily accumulates Tether tokens as traders redeem Tether units. In the chart, each dot is a transfer into Bitfinex's #2 wallet. Once Bitfinex deems that balance to be large enough, it sends it all back to Tether's Ethereum treasury wallet for cancellation. The large collapses in the chart are when these transfers occur.

If you are interested in investigating Bitfinex's involvement in the redemption process closer, I've noticed that Bitfinex's #2 and #3 Ethereum wallets work together to manage Bitfinex's inventory of Ethereum-based Tether tokens.

Note that while Bitfinex manages its Ethereum-based Tether units using two wallets, it only uses one for Tron, which makes Tron-based analysis of Tether much more simple.

So let's sum up the on-chain Tether redemption process. There appear to be two routes by which Tether units can be redeemed. Some redemptions get sent directly to one of the Tether treasury wallets. Others get sent to Bitfinex. After a period of accumulating redeemed Tether units, Bitfinex eventually transmits the entire batch to Tether's treasury wallets for cancellation. At this point they fall out of circulation. After a period of time passes the quantity of Tether units sitting in treasury reaches a high enough trigger point that Tether burns it all, leaving its treasury wallets close to empty.

To finish off, I want to provide a quick look at who is doing the redeeming, and why.

From May 12 to June 30, Tether has contracted by almost 17 billion units, or 20%, which means that a massive amount of redemptions have occurred. A single Tron wallet has been responsible for 3.3 billion worth of redemptions alone. We'll call it the 6DNE wallet after the last four digits in its address.

We can surmise why these redemptions have been occurring by looking more closely at 6DNE's transactions.

Created on May 12, 2022, the 6DNE wallet has made 3.3 billion worth of transfers to Bitfinex in 108 separate deposits (as of June 30). The average deposit size is 30.5 million Tether units. Most of the Tether units that 6DNE acquires are sourced from wallets associated with three major exchanges: Kraken, Binance, and FTX. (It also acquires Tether units from these two wallets, which I suspect are Binance-satellite exchanges.) 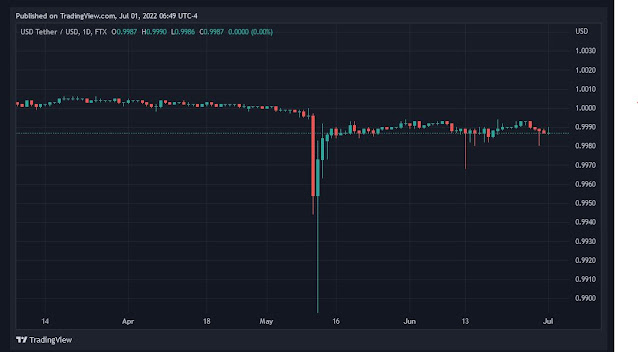 Tether's fall in price occurred because large amounts of Tether units were being desperately sold on markets like FTX as the crypto-economy deflated. Tether sets a redemption minimum of $100,000, which means that most Tether owners can't directly redeem unwanted Tether units via Tether's treasury wallets. That leaves them with no choice but to sell on exchanges.

This is where arbitrageurs like 6DNE step in. The owner of 6DNE appears to be buying Tether units in large multi-million batches on exchanges like Binance and FTX at prices of $0.9985 or so, and sending them to Bitfinex to be redeemed at $0.999. By harvesting the tiny $0.0005 difference between the purchase and sale price, the owner of 6DNE earns a near risk-free profit.

Arbitrage conducted by traders like 6DNE helps to prevent Tether's price from falling much below $0.9982 or $0.9981 on exchanges like FTX and Binance. This process doesn't work perfectly, though. On May 12 the price of Tether collapsed to 95¢ on major exchanges, as the chart above shows.

Note that I said that the trader is redeeming at $0.999, and not $1. This is because Bitfinex and Tether both charge a 0.1% wire fee. This fee reduces Tether's effective redemption price from $1 to $0.999.

Let's work out an actual trade. If the owner of the 6DNE wallet purchases 30 million Tether units on FTX at $0.9985 and sends them to Bitfinex to be redeemed at $0.999, the trader earns a profit of $15,000 ($0.0005 x 30 million). The owner of 6DNE may have to pay fees to FTX, which will eat into the bottom line. However, if the trader was making liquidity rather than taking it, fees may be zero to negligible.

6DNE completed 3.3 billion in redemptions, which assuming a profit of $0.0005 per Tether unit translates into around $1.5 million in gains. Not bad for a two month's work.

After 6DNE's Tether units arrive at Bitfinex, Bitfinex holds them for a while and ultimately sends them to Tether's treasury wallet. At this point 6DNE's formerly-owned Tether units are officially out of circulation. And then after a few days or weeks, Tether burns them. They have ceased to exist.

And that, in short, is how and why Tether tokens flow from the market back to their issuer.