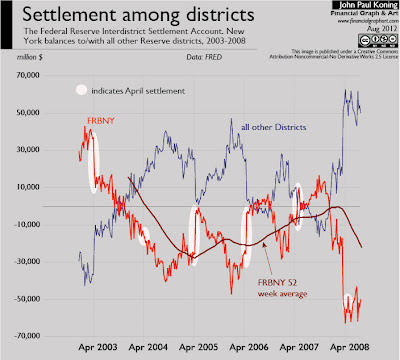 Each April, settlement occurs. The FRBNY's average ISA balance over the course of the previous 356 days is calculated (the dark red line). If this amount is positive, then the FRBNY receives that amount in securities from other banks, and its amount owed falls by the value of transferred securities.   Since the 356 day average will almost always differ from the net amount owed in early April, the balance needn't fall to zero so as to perfectly settle the account. If the 356-day amount is negative, the FRBNY pays that amount in securities to other district banks, and its amount owing falls.

Except for April 2003, from 2003-2008 the FRBNY was generally in deficit to other district Reserve banks (the red lines below zero). Each April it was required to transfer securities to these banks, as represented by the sharp upward movements in its ISA account in April 2005, 2006, 2007, and 2008. Settlement in April 2004 would have required only a token amount of securities, since the 52-week average FRBNY ISA balance was near zero. Thus a visual inspection of the FRBNY's ISA account shows no apparent change.

The next chart brings the credit crisis and aftermath into the story, a time over which the FRNBY's ISA balances grew tremendously. Investors fled to New York banks in September 2008, and though New York's ISA balance declined back into negative territory by early 2009, its 52-week average balance was still quite high by April 2009 settlement period, resulting in a transfer of securities from other districts to the FRBNY and a fall in its ISA balance (to even more negative territory). 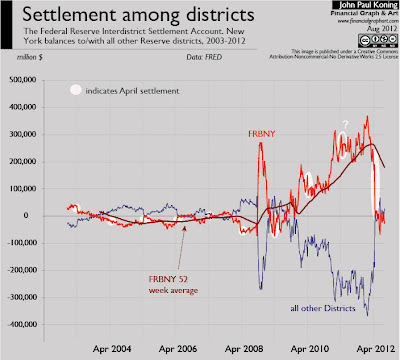 For the April 2010 settlement period, the FRBNY's 52-week average balance remained in positive territory, and, as a result, it again received securities so as to settle. Its ISA balance that April fell by about $50 billion, apparent on the chart.

Through the rest of 2011 and early 2012 the FRBNY's ISA balance remained high and the 52-week average of its balance steadily rose. But in April 2012 settlement, the system seems to have finally settled. Some $200 billion worth of securities were transferred to the FRBNY from other district Reserve banks, and as a result the FRBNY's ISA balance fell towards zero.

The upshot is that the Fed can impose settlement on district Reserve banks or it can avoid it. Those in Europe looking to the US for an example of "hard" intrabank settlement among NCBs should look elsewhere.

Note: Credit Suisse's Economics Research team has some notes here on the ISA which mentions yours truly.
Posted by JP Koning at 10:55 AM